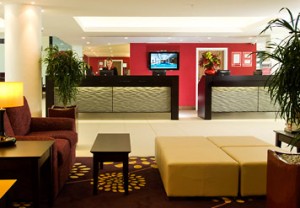 I never had to get up seriously early until I was into my 20s. Then the redeye mornings started in earnest. These days, as a species, we –children included–are now doing more getting up at unearthly hours to set off on long journeys than probably any people since our distantly wandering ancestors.

Although I also live very close to Luton Airport, as luck would have it very few of the flights I take actually depart from there. So most of the time when I  have to catch a plane, I’m heading for Gatwick or Heathrow. I live a 20  minute  drive north of the M25, where things can go seriously wrong at any time of day or night.

(You may already be  asking why, if the M25 is so notorious, don’t I take a back road and  miss all these famous traffic jams? Veterans of the endless clog  on that notorious highway will know it doesn’t work like that: congestion on the M25 usually means that all the adjoining roads for miles around are snarled up too.)

Of course, these days any sensible caring-for-the-planet traveller should be taking the train anyway, and there is a very good service from my local station straight through to Gatwick, with one change, and avoiding the centre of London.

In theory, yes, but I won’t bore you with the number of times in the past week when this line, as if in sympathy with the motorway, has ground to a halt because of “signalling problems”.

And because of some bottleneck problems at Clapham Junction that only an anorak on the platform could explain, those trains don’t start until after seven in the morning anyway, and would get me there too late for those early flights I always seem to be booked on.

For the past few years my wife and I have taken to staying at a hotel on the airport  perimeter the night before our flight. (We paid for this ourselves; but on the last occasion we were kindly given the accommodation by HolidayExtras.com – I mentioned that in the interests of full disclosure.)

Car parking comes with the package.  The hotel staff park your car and bring it back to the hotel forecourt for your return, or, as in our case, you drive it yourself to the nearby longstay car park.

Technology has made the man at the barrier taking your money redundant. You reach the barrier and a camera recognises your number plate–you having  filled in in your details online. You are then issued with a ticket with your license plate number, valid for however long.

We stayed at the Gatwick Hilton. The travel instructions cautioned that it would be a 6 min walk to departures. We did it in an easy 4 min, but we certainly weren’t rushing. And, yes, it was covered all the way.

Come on, softy, you may be saying:  why not save what could be not far of £100 for the holiday, or short break to come? But if that dreaded M25 jam were to kick in at 7 am, or your train was held up by points failure at Kensington Olympia, what then?

Easy answer: you don’t get your money back from the budget airlines if you miss your plane, and if they re-book your flight there is a fee to pay, and time lost at the other end.

We tend to take shortish city breaks–for instance early Friday morning out to Rome, returning on the last flight on Sunday night from Rome. Even that’s not long enough, so missing the flight and losing another five or six hours or more would have been tough.

There’s another thing. A frightfully early start from home for an early flight usually means you’re not fit to much on that first night in your destination, and on a, say, three-day break, when you’re flying home the third night anyway, you only have one night in the destination when you’re properly rested. So booking a hotel the night before you leave could well contribute to a more enjoyable stay.

We stayed at the Hilton Gatwick, courtesy of HolidayExtras.com