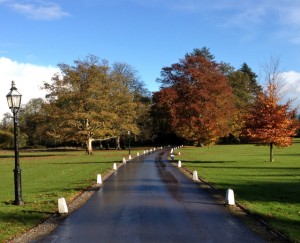 Once the standard dress in this lesser stately home in the Hertfordshire hills would have been the morning suit and the crinoline. Today the everyday garment in Champneys is the fluffy white dressing gown with fur collar.

After early misgivings, I decided to wear mine around the place too, taking heart from – adapting it to these circumstances – that line from The Boyfriend, “On the beach, everyone looks the same”. I wore it in the cafe, where, if you time it right, you catch a fresh batch of raisin and ginger muffins, freshly made in their own kitchen. I wore it in the music room, where there are restful views out over the stately gardens. I was still in it reclining in the comfortable leather sofas at the bottom of the grand staircase.

Nobody seem to mind, indeed nobody even noticed, I’m sure. In truth, you stuck out if you are not wearing a fluffy white dressing gown. Probably means you have just arrived.

What did put me in a minority category, however, was my gender. At a rough and unscientific count, I reckon I was outnumbered 5 to 1 by women. That’s understandable. It’s a tough world out there, and many women have Champneys – the company now had now three more “wellbeing spa resorts” of the name in rural Bedfordshire, Leicestershire and Hampshire – on their wish list  as a preferred place of retreat and pampering, to be shared wherever possible with members of the supportive and like-minded sorority.

Among women conversation switches easily to Distant Shores Hot Poultice Massage, Mediterranean Bliss Stone Indulgence, and Relaxing Dream Floatation. For men it’s a little different. Many men feel most at ease, and find preferred company and conversation, on the golf course, or the football terraces. Others in my wider brotherhood look to the gym for recreation, and perhaps the pub for rest. The thought of potions and pummelling makes them palpitate.

Those over a certain age may not have applied a therapeutic balm to their person since they were schoolboys, rubbing in the Brylcreem. The very thought of another man, still less a lady, kneading their aching joints as they lie prone on a flat surface, and only minimally covered by a towel, would be enough to bring out many of them in a deep flush of embarrassment. And what would my golfing friends think about being gently thwacked with sections of bamboo, as I was for a whole 50 minutes, I shudder to think.

My advice to the cautious and bashful men visiting Champneys for the first time is bask in the anonymity of the white dressing gown. Not that you have anything to be shy and retiring about. The whole philosophy of this place can be paraphrased as: we send you out feeling better then when you came in.

I soon get the hang of it. Announcing to the lady at the spa reception desk that I am here for the bamboo massage might in the past have caused me defensively to lower my voice to a whisper. Here I don’t feel that all female eyes were suddenly turned on me in mock and derision. I’m sure they are far more engrossed in the piece on Prince Harry in Lady magazine, liberally scattered around the comfy seats in the waiting area, along with Cosmopolitan, with its abundance advice on achieving better intimacy.

The spa promises interesting outcomes from my session, which I ponder as the treatment therapist beats out a steady bamboo tattoo over pretty well every square inch of my anatomy: “…silky bamboo canes … stretch and massage the body…release muscle tension and tightness, improve circulation and lymphatic flow to aid detoxification of body, has a regenerating revitalising effect leaves body feeling deeply relaxed. The skin is left feeling silky and smooth.”

Meanwhile my partner, a little more versed in these often complicated offerings, is luxuriating in seaweed therapy, followed by that standard ladies’ spirit-lifter, the pedicure.

If I do have a criticism it is that, that evening, the restaurant was just a little bit over-wholesome in its menu, stressing calorie control, and offering a seating policy that plants people who find it difficult to say no behind a big screen, so they can’t see the deserts.

Breakfast is equally worthy. I don’t even consider ordering a “Full English”, for fear that the waitress might give me the disappointed “Oh dear, you have so let us down, and after we had such high hopes of you ” expression.

I study the treatments list. What is a man to choose? Specifically for us, there is Elemis Face and Body Sensation – a massage with stones combined with anti-ageing facial. Or Shiatsu, a Japanese treatment using thumb, finger and palm pressure “along specific meridians to ease aches, pains, fatigue and tension”. Or maybe a simple Indian Head Massage, for relief of head, neck and shoulder tension, was in order.

I ponder the options over a gentle workout in the gym, hovering briefly over Executive Hand and Nail Grooming For Men, “with nail analysis, and nourishing preparations to re-condition, groom and make hands look fresh, healthy and professional”. In the end I plump for something pretty old, thalassotherapy.

I’ve always assumed this was some kind of obsessively self-indulgent water treatment peculiar to the French, whose muscles I assumed, ached in all sorts of different places to ours. Champneys promised: “mineral rich warm pool, with hydrotherapy jets to stimulate and tone tired aching muscles”. (The French version I looked up did seem rather internse: “…therapy is applied in various forms, as either showers of warmed seawater, application of marine mud or of algae paste, or the inhalation of seafog”.)

In the end it was the easiest treatment of all. You simply lie back, or even better, settle back on underwater seats with a dozen other people, while vigorous, yet soothing, jets and currents and one waterfall, play around your ankles and calves and back and neck. Just so you don’t drift off completely, the lady in charge directs everybody to move around to the next station every six or seven minutes.

Suggested summer diversions around the house include a power walk, a guided ramble, and cycling. I was in the mood for a leisurely stroll, just to take the measure of this fine country retreat. It was built, replacing a previous house, in 1874 in extensive grounds of around 200 acres high in the Chiltern Hills at Wiggington, south west of Tring. It was bought by the Rothschild family in 1908. The European banking family added it to a long list of properties acquired and built in Buckinghamshire and Hertfordshire. The most notable is Waddesdon Manor, north of Aylesbury.

The house was opened as the UK’s first health farm in 1925 by Stanley Lieff, who pioneered the concept of holistic health and wellbeing. Dorothy Purdue, the founder (with her husband Robert) and present owner of the Champneys Health Resorts Group with her son Stephen Purdue, set up a slimming club business in the 1970s. Over the years other properties were added. Champneys itself was acquired in the 1990s and very soon its name was applied to the entire group.

In the 2000s Champneys has projected itself as a health resort, dedicated to “wellbeing of mind, body and soul” as well as offering medical, health and weight loss services. It became synonymous with the destination of choice for a day, weekend or longer of self-indulgent pampering – the quintessentially “Good for you” stay away.

The other three Champneys are at Henlow in Bedfordshire, Forest Mere in Hampshire, and Ashby-de-la-Zouch, Leicestershire. There are also eight Day Spas, in town and city centers, in Enfield, Guildford, Tunbridge Wells, St. Albans, Brighton, Chichester, Milton Keynes and Bath. The name is almost universally recognized, among its target market. Recently the company was awarded a commendation for one of the best brand names in the country.

It’s not all lying back in a trance, submitting to hot stones. There is a Boot Camp, of between two and seven days. The promise, by the week’s end, is that you will feel “fitter, more energised and inspired to make positive lifestyle changes”, with an average weight loss of 6.3lbs and an average 4.5 inches off the waist.

The resort’s Wellbeing for Women Retreat at Champneys  “can kick-start a well-informed, long-term health programme, [focussing] exclusively on the needs of women, with workshops on nutrition, understanding the impact of hormones, exercising to protect bone mass and how to maintain metabolism to prevent middle age spread.

We drove back home feeling refreshed, invigorated and revivified. Champneys’ treatments  had toned tired muscles, and boosted our positivity index. But I felt I can’t help feeling that the very best session was that time in the cafe over coffee and that naughty raisin and ginger muffin.