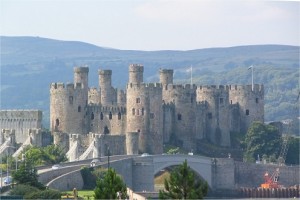 Conwy – “incomparably the most magnificent” castle

“Know, Sir, that Llewelyn ap Gruffydd is dead, his army broken and all the flower of his men killed.” This despatch from his winning troops at the front was all the planning permission Edward the First required to begin one of the most intimidating programmes of military construction of the Middle Ages.

Within three months, in March 1283, Edward was standing in metaphorical hard hat on a prominence beside the river Conwy personally supervising the first cuts into the rock  for the work that proclaimed his conquest. He would end the rule of the Welsh princes by ringing this wild land  with castles so mighty they dare not rise again.  Not for Edward the caution of serial construction. This man had imperial pretensions. For the next five summers Caernarvon, Conwy and Harlech rose simultaneously.

Beaumaris followed soon afterwards. Edward sunk half his annual income in the work. Master James of St George, the greatest military architect of his age, directed 1500 of  the best craftsmen in the kingdom, summoned from as far away as Kent and Northumberland. They hewed trees, shaped planks, cut stones. They swarmed on rickety ladders up the rising walls; they trudged up scaffolding that twirled around towers like helter skelters.

Edward’s earlier castles, at Rhuddlan, Denbigh and Flint, were mere prototypes for this tremendous quartet.

The castles have stood  for seven centuries as a statement of imposed political union – the supremacy they represent is the reason Welsh rugby forwards burst with such retributive ferocity into the first scrum against the English, at the Millennium Stadium in Cardiff.

Conwy (“incomparably the most magnificent” said a British Academy report in 1946) is the castle  many people see first. It must be the most conspicuous historic monument on the road and railway from London to Ireland – a noble shock after the North Wales holiday Coast corridor.  Here, and at all all four castles,  find a  boatman who can sail man you out into the bay  for the long look back how you are. Invaders  were meant to see them from  the see – with the mountain  piling up hiring behind – and despair.

I walked to Conway Castle atop the town wall, which loops in a protective arm just over half a mile long around some of the most desirable real estate in Wales. It is the finest example of town wall left in Britain, surviving so little altered and so complete.

Inside, like all empty, unfurnished and furnished spaces, the castle looks deceptively small and inoffensive. Externally, the castles are all as well preserved as any mediaeval cathedral. But, unlike cathedrals, they retain scarcely an original detail to give a clue to life within.

So I climbed on to the ramparts and wondered instead of the castle’s power architecture. Seductive curves led invaders into a literal dead end at the West Barbican, when terror was deluged down on them through the machicolations above. “ Forced entry,” advised the guidebook, “is a virtual impossibility.”

Caernarvon (like Beaumaris, only 35  minutes away on the  A 55) is the second castle town within walls, and another glorious fusion of military potency and civic calm.

Its narrow streets are being elegantly redesigned and the re-claimed from the car. The walls, banded with multicoloured stone, were modelled on Constantinople’s defences.

Inside the castle is virtually hollow, a ceremonial canyon, a series of grass terraces where they patiently await the next investiture, while continuing to celebrate the last one. On my visit the dais was still in place from 1969. “God bless the Prince of Wales” choruses out every 10 minutes on a continuous tape in the exhibition in the north-east tower, prime exhibit the low seat in vermilion Welsh  wool on which the Prince knelt. In the north-east wall, defence reached a peak of deadly ingenuity. Even today, a contingent of the Sealed Knot, armed with crossbows, could lay devastating carpets of fire from two tiers of arrow slits in the stones and hold out for ages to the helicopters arrived.

Beaumaris, the largest of the four, is a remote and  curious citadel, the most technically perfect mediaeval castle in Britain. It was a built on the flat – where you might have expected an Abbey – on the “beautiful  “Marsh” of  the Norman French, at the easternmost end of Anglesey.

And never quite finished. On my visit, the high tide glugged searchingly  around the vast, symmetrical outer walls. Inside, there was enough greensward for the whole of the Welsh assembly to hold a picnic.

Harlech is the most detached to the castles. It glares defiantly down on Tremadog Bay, on the coast below the Lleyn Peninsula. Naturally protected on three sides by cliffs, it would seem to have been the hardest of all to break.

The only way in it was by a devilish route through powerfully defended gates, and portcullises  and past loopholes bristling with armaments.

And yet it was the only  Castle to fall,  to Owen Glendower’s Welsh patriots in 1404. It became their final refuge, and later that of the famous men of Harlech. Truly the castle of lost causes.

The Valley of the River Conway is a precise line of demarcation. Cross it, and enter the part of North Wales where most people speak Welsh as the language of daily life.

Much of this top corner of Wales is within the 840 mi.² Snowdonia National Park. A place of scree-sided peaks, steep river valleys, glassy mountain lakes, slate quarries and goldmines. It is one of the few remaining genuinely wild places easily reached from large centres of population. Snowdon is among Britain’s highest mountain, at 3,560 feet.

This area is so accessible because it lies on an international trade route. The same roads and railway that lead to the Irish boat at Holyhead also opened it up to visitors.

The A5 cuts through Snowdonia from Shrewsbury,  while the A55  roars rapidly across the North Wales coast. And for such a remote and little populated area, this part of  Wales is remarkably well served by the railways.

South of Snowdonia is the Cambrian Coast line, from Shrewsbury to Pwllheli, a link that somehow evaded the Beeching axe.

It winds round the coast, past Harlech Castle, close to Clough Williams Ellis’s eccentric Italianate folly of Portmeirion on Tremadog Bay, where The Prisoner television series was filmed, then burrows west into the LLeyn Peninsula.

Minffordd is the junction for the remarkable privately-run Ffestiniog Railway, a former slate  railway now carrying passengers to Blaenau Ffestiniog. At Llandeilo it links with the Conwy Valley line that strikes off north through the heart of Snowdonia,  via the mountain resort village of Betwys-y-Coed, down to Conway and the north-west coast.

The Snowdon Mountain Railway runs to the very top of Snowdon, from Llanberis.

It’s worth seeking out three more castles, Criccieth, Dolwyddelan and Dolbadarn. Llewelyn the Great built them: they mark the end of independent Wales – Dolwyddelan and Dolbadarn guarding strategic Snowdonia passes, fell to Edward. There are 32 castles and historic buildings in the care of Cadw and other bodies in this part of Wales. One of them is Plas Mawr in Conwy, the finest example of an Elizabethan household in Wales.

There are 18 historic sites on Anglesey. They range in age from the 18th-century mansion Plas Newydd, owned by the National Trust, to the 5000 year old underground tomb at Aberffraw.

Anglesey is a place apart: the village with the longest name (abbreviated to Llanfair PG) is a coach tour  cartographic gimmick. Look instead for quiet bird reserves, and the tremendous backdrops of Snowdonia. Turner was so overawed, he roughly doubled the height of the mountains in his study of Beaumaris.