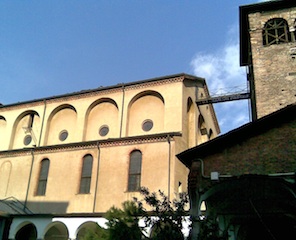 One of many Milan churches

This is a piece I wrote after a visit there in 2009. ( I include a resume of the New York Times article,  “A reborn cathedral joins fashion-forward galleries and hotels”  below)

On our visit we stayed in  the hotel where superstar footballer David Beckham  stayed when he was playing for AC Milan.

The writer compiled his pick of things to see and do on a mere mortal’s budget. It includes the glory of the cleaned-up Duomo, cafes where the coffee tastes like a Puccini aria in a cup, a fabulous pizza place, and La Scala opera house with ushers straight out of a Botticelli portrait.

“I cannot understand how it can be second to anything made by human hands,” wrote Mark Twain of Milan’s colossal late Gothic cathedral, the Duomo (free entry). He has a point. But choose a moment when there isn’t a big tour party inside. The cathedral front, now restored in to its original sparkling white, is a sensation. After a charming “Buon Giorno” from security, I took the steps (5 euros, the lift is 8 euros in) up to that wonderful Mary Poppins rooftop moment. We walked out among the gargoyles and flying buttresses, under the statue of the Virgin atop the main spire the – 300 feet up, she is the highest thing in Milan. The view is exhilarating, from the matchstick figures in the main square outside the graceful Galleria Vittorio Emanuele (the original shopping galleria), to that stupendous panorama of the snowcapped Alps.

These days you can reach Milan by leisurely overnight train, via Paris. If you fly, choose a service to Linate airport, 10 minutes (4.50 Euros) away by bus. The bigger Malpensa terminal is 30 miles out, and it’s a shuttle bus from Terminal 2 to Terminal 1, for the Malpensa Express to Milan’s Cadorna station (11 euros single). Malpensa shuttle bus is 12 euros return. Travel in Milan is a delight – and I’ve never seen so many Smart cars and Prius taxis. Our vital purchase was the two-day travel card (5.50 euros and), for unlimited travel by metro, underground, bus and the city’s wonderful ancient and modern tram system. Some of the refurbished cars, all polished wooden seats and clanking charm, date from 1928. We used the long waits at traffic lights to window-shop from our seats. You can hire bikes from many staging points around the city.

The two great spectator sports in Milan are opera and football. Choose the right weekend and you could see divas at La Scala opera house one day, and international stars at the San Siro the next afternoon. AC Milan and José Mourinho’s Inter share the 80,000 capacity stadium, so there is usually a game every weekend The steep stands, bringing spectators so close to the pitch, and the chorus of 30,000 passionate tifosi create an atmosphere matched only by Liverpool’s Kop.. Nobody minds if you know nothing about sport. Italian football is a fusion of fashion parade and high drama.

AC Milan put David Beckham up in the hotel Principe di Savoia, newlyrestored to its cool early 20th century grandeur, when he played there in 2009. He was on the ninth floor, in the Royal Suite. We were in a recently refurbished room on the fourth – star detail, our bathroom’s white marble slabs and glass mosaic walls. They offer a taste of a top footballer’s opulent lifestyle. A personal shopper will show you the boutiques of the Golden Quadrangle. The “Football and Facial” package includes tickets at San Siro and a session in the hotel’s Beauty Centre. We looked in vain for Becks in the sumptuous Giardino d’Inverno Bar, with its domed ceiling of coloured glass. But we had a grandstand view of his personal paparazzi in the park from our window. www.hotelprincipedisavoia.com

“Never go back” is a rule to break when choosing a restaurant in Italy. We followed a trail of colour in shop windows, full of handbags the tint of a spring morning and glassware patterned like a coral reef, to Rosy E Gabriele, in Via Sirtori. We hadn’t seen this family restaurant for years, but it hadn’t changed, full of Italians of all ages, always a good sign. It’s just one big, no fuss room, with wooden floors, red and white tiles, orange tablecloths. The career waiters were part of the fabric, cheerful, attentive, and with good English. We chose from a big list of lavish pizzas and home-made pasta. Around £40 for two, with a half litre of house red. There is a big choice of restaurants down in the Navigli (Canal) District. I recommend Aquasala (Ripa di Porta Ticinese). And Caffetteria Dante, in Via Dante, for city centre coffee and ice cream.

Where to if they sell out the Last Supper (www.tickitaly.com, 16 euros; www.cenacolovinciano.org, 8 euros)? And if La Scala www.teatroallascala.org is full? (They release 140 tickets every day, two hours before the start.) Tease out the city’s lesser marvels. We enjoyed the Archaeological Museum, for the city’s rich Roman legacy, and exquisite roof paintings in the adjoining church; and Basilica of Sant’Ambrogio (free). We toured the area around Cadorna station, before taking the Malpensa Express to the airport. The independent music store Buscemi Dischi has a huge selection. Opposite, on Corso Magenta, is the 100 year old Bar Magenta, with a bar like a ship’s prow and choice of 30 paninis. Stock up on chocolates at the ravishing Chocolat Milano (Via Boccaccio).

The New York Times referred to  “ novel, eye-catching design emerging around the city…

“most of the unsightly scaffolding   obscuring Milan Cathedral has been dismantled, the newly scrubbed Gothic masterpiece

“Across the piazza, the city’s collection of 20th-century art is now showcased at the Museo del Novecento, – opened in December (2010) in the restored Palazzo dell’Arengario.”

“Arguably the most fashionable addition is the Hotel Milano Scala, – opened 2010 in a renovated 19th-century mansion, with the eco-chic promise of “zero-emissions hospitality.”

The hotel describes itself thus:

Hotel Milano Scala is a boutique hotel in the heart of Milan. This 4-star Superior Hotel is the first totally ecosustainable hotel in Milan. Its 62 rooms and suites are dedicated to music,  culture and sustainability.