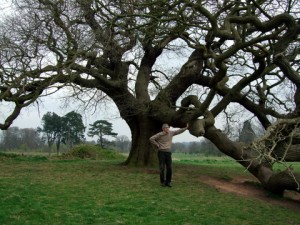 Directly above us the avian equal of an Olympic athlete pins back its wings and zips away in warp drive.

We quickly eliminate merlin and peregrine falcon. This has to be the hobby. (Thank you, RSPB, for your web site assistance). “Long pointed wings” – tick. “Reminiscent of a giant swift” – quite so. “Dashing flight, accelerates rapidly, high-speed aerial manoeuvres.” Oh yes.

The National Trust has charted a circular walk through the national nature reserve that wraps around the 300 year old Calke Abbey, where the rooms were left exactly as they were when the trust acquired the estate in 1985.

It’s a parkland stroll so gentle (1½ miles) we hardly raise a puff. Plenty of time, then, to sleuth out the intriguing details.

Top of the hard-to-see list is the “globally rare” white-clawed crayfish. We imagine it darting furtively around the 18th-century ponds. Badgers are equally elusive, but their tracks are everywhere. Easier to spot are some very rare fungi surviving since the last Ice Age, a selection from 350 resident species of beetle. And the hobby.

Top of the “can’t miss” list is the moorhen. A posse eyes us as likely providers of bread. When we don’t deliver, they paddle off in a huff. A heron glides gracefully past, after a laborious, flapping take-off.

We climb a gentle hill, garlanded with cowslips, alongside a dry stone wall, to stop number 2. Derbyshire hills roll serenely away south.

Stop 3 is on the edge of a wood, overflowing with bluebells and bird song.  That two-tone call, was it a chiffchaff (which fly from West Africa to be here)? Or the great tit – which never goes beyond the next field? No argument, though, that the big bird yaffling away into the trees, outraged by our arrival, is a green woodpecker.

We reach stop 4. This is the big one, the Old Man of Calke. This original oak is “at least” a thousand years old, say the experts. As a speculative sapling it burst through the leaf litter when Ethelred the Unready was on the throne.

It’s taken every knock our weather can inflict, except glacier strike and sandstorm. And still it stands, frayed around the edges, but green and very alive.

We leave the tree to its second millennium, and complete the circuit along a fine line of horse chestnuts.

Then back to the perfect National Trust ending — cream tea in the cafe, with scones made to a 300 years old recipe.