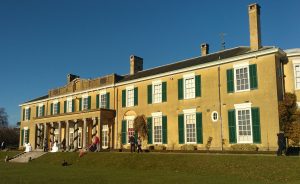 Surrey is easily missed, as we rush through by rail and road. Yet the first county to the west of London offers much to detain and reward the visitor. There are many pretty little villages and market towns, fine old buildings, tranquil countryside and river walks, including rambles along the Thames.

So, a weekend in Surrey? It’s not as far-fetched as you think. I was there on the invitation of the Hand and Spear in Weybridge, recently renovated by owners Young’s to bring out its original features.

A free-standing copper bath stood In our room. This elegant Victorian flourish is the sort of self-indulgence boutique hotels offer in order to set themselves apart these days. It offered sweet relief after a busy day touring the county. This genteel 1833 redbrick building (a three minute walk from the station, and 29 minutes from Waterloo on the fastest train, and just inside the M25), has another selling-point. Robert Louis Stevenson stayed here while correcting Treasure Island. Another room celebrates the nearby Brooklands Museum. At ground level, it becomes a big rambling pub. The restaurant offers creative alternatives to the standard pub fare. www.handandspear.co.uk The hotel is an attractive base for tourists who want to see London, but baulk at the hotel prices there.

The big event in the county this year (2017) is the 200th anniversary of the birth of G F Watts (he died in 1904). Watts was one of the outstanding painters of the Victorian era, his career spanning the monarch’s entire reign. He was also a sculptor, draughtsman, muralist and philanthropic visionary. His friend Lord Leighton described him as “England’s Michelangelo”. A major exhibition to mark the anniversary continues at the Watts Gallery at Compton, outside Guildford, until 26 November 2017.

Watts’ first picture dates from three years before Victoria’s coronation in 1838; his last painting came three years after she died in 1901. Watts was the first artist to depict the stark social issues of the time – poverty, child prostitution and cruelty to animals.

On display in the gallery are the artist’s most striking masterpieces, borrowed from public and private collections.

One of the nation’s favourite portraits, Choosing (1864, National Portrait Gallery), is shown alongside powerful protest paintings and abstract canvases, such as The Sower of the Systems (1902, Art Gallery of Ontario), which is back in the UK for the first time in over a century.

Also at the Watts Gallery (until 5 November 2017) is A Life in Art: G F Watts 1817-1904. This takes a chronological journey through his illustrious life, from humble origins to Victorian cultural idol. It reflects every aspect of his artistic output, illustrated by some of his most exquisite drawings, preparatory studies and compositional sketches.

The Watts Gallery, which the artist built in 1903 is his shining legacy. Restored in 2010, it was named one of the top 10 small galleries in the UK. A study of Violet Lindsay, Duchess of Rutland, the gift of her grandson John Julius Norwich, is a radiant new acquisition.

One of the easiest and flattest long-distance walks in England passes through Surrey. The Thames Trail follows the river from Kingston, across the fields of Runnymede, where Magna Carta was signed, and on through a peaceful countryside. And all well under an hour from London. There is a choice of railway stations. I like to disembark at one and navigate a route to another, using Google Maps and taking in some country pubs on the way. There is lots more walking in the Surrey Hills, which cover a quarter of the county, and around the Hogs Back and the Devils Punchbowl. This is the natural amphitheatre near Hindhead. Tranquillity was restored when they put the A3 in a tunnel in 2012. 200,000 trees were planted on the route of the torn-up old road.

The skyline of London is visible from the car park of Polesden Lacey. And yet, despite its closeness to the capital, this National Trust (NT) property manages to keep a serene distance, on the edge of the Surrey Hills.

It is a Regency house, extensively remodelled by a beer heiress in 1906. Margaret Greville was the daughter of William McEwan, whose brewery later became part of Scottish and Newcastle. She was renowned for her celebrated house parties. Illustrious guests included the later George VI and Elizabeth Bowes-Lyon, who spent their honeymoon here.

It’s an interesting, rather than remarkable, house. The rooms, with her collection of paintings, furniture, porcelain and silver, are displayed just as they were when she entertained in them. In the extensive grounds are a walled rose garden and ancient woodland. Do find time for the excellent NT tea room.

Don’t let the M25 grind you down. Wisley, one of the great gardens of the world, its purpose “to inspire and educate”, provides plenty of therapeutic diversion just a mile from the A3 junction.

One recent addition is the great Glasshouse, the size of 10 tennis courts. Planet Earth, but without the animals. Inside it is lush and magnificent, bursting with tree ferns, palms, creepers, dazzling flowers and the “tender plant collection” – rare and difficult-to-grow species. There is interest for the true flower fan – “Powerful Peonies”, and a mass planting of alliums. And for those who just want to marvel at nature’s eccentricity. The katsura tree, for example. Its leaves have the scent of toffees. There is a reassuring sense of continuity and long life in the giant redwoods, planted in 1904.

Guildford Cathedral stands handsome in brick on a hill outside the town. This is one of the great British cathedrals of the 20th century, worthy to stand alongside Liverpool and Coventry. It was conceived in the 1920s by architect Sir Edward Maufe, and completed in 1961. Austere and simple, yet powerful and grand, it is a design of the times, with the spirit of the past. It is well away from passing traffic, which affords it the tranquillity you might have found centuries ago in the great mediaeval cathedrals. It re-opened fully after building work in the spring of 2017. Maufe also designed the nearby Air Forces Memorial at Cooper’s Hill, overlooking the Thames, dedicated to 20,456 British Empire aviators lost in World War II. 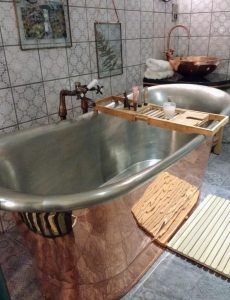