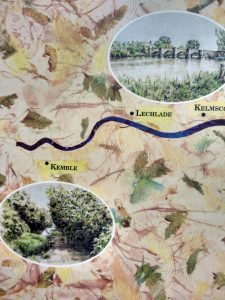 Upper reaches of the Thames, from dust jacket of “A Walk along the Thames Path”.
(Gareth Huw Davies, pub Michael Joseph.)

Chimney Meadows, on the banks of the River Thames near Bampton in Oxfordshire, is one of the Berks, Bucks & Oxon Wildlife Trust’s biggest and most important nature reserves, vital habitat for otters and endangered wading birds.

In 2004, with the help of its supporters, the trust (BBOWT) bought it, as potential development threatened. Now it has the chance to extend this nature reserve, to the other side of the river. Farmland has come up for sale just across the Thames from the Chimney Meadows National Nature Reserve, at Duxford. It also runs along side part of the river which was bypassed in the 1890s, Duxford Old River. The trust believes it would slot perfectly onto the existing holding – “like the missing piece of a jigsaw”.

If the trust could buy it, the purchase would create the first nature reserve to cover both sides of the river anywhere along the Thames. Naturally wildlife would migrate into the new habitat from the existing reserve a short distance away across the river.

BBOWT has launched an appeal to raise £220,000 (later extended to £575,001 when that target was met) towards the purchase price of the 113 acres Duxford Old River land that has come up for sale.

A spokesman describe it as “in many ways a vast blank canvas with so much potential for wildlife.” Although it has been farmed sympathetically, in a way that has benefited nature over the years, there is no formal protection and it could rapidly degrade if it was purchased by a less-caring owner.

The Trust would allow the Thames to flood onto the land and hold water in ponds and pools, providing much-needed and undisturbed habitats for curlew and lapwing to breed, and large flocks of birds such as snipe and teal to overwinter here. New backwaters and a fish pass will give safe haven for fish to spawn and insects to thrive, providing more food for bats and birds.

The spokesman outlines why this opportunity will be transformative: “We’ve shown on Chimney Meadows that after 14 years of careful stewardship we’ve been able to restore 654 acres of farmland to its former glory and create a major haven for wildlife. The sheer size and remoteness of the site would provide much-needed overwintering habitats for nationally declining wading birds.”

The high hedgerows around the fields and ancient river meanders of Duxford Old River create a landscape away from traffic, noise and development where otters, warblers and overwintering wildfowl are undisturbed.

The twists & turns of the forgotten meander of the Thames is perfect for otters. The trust believes that buying the site is the only way to guarantee they can continue to thrive here.

People who know the River Thames largely through its stately progress through London, past palaces and other historic monuments, might be surprised at how utterly peaceful and remote the stretches of the river are in its higher reaches, particularly above Oxford. Although the Duxford Old River land is it only a mile or so away from the busy A420 Oxford to Swindon Road, it is quite invisible and out of hearing.

I walked this section of the river some years ago for my book “A Walk along the Thames Path”.

I wrote: “on this soft, soothing day, this is a joyous place and a challenge to those who celebrate the quality of our landscape only by its fringes, wildernesses or high points. Here, quite unexpectedly, in the middle of Lowland England, midway between Buckland and Chimney is a discrete paradise.

“At Shifford the Thames is bypassed. Long ago the Suez Canal strategy prevailed and engineers sliced through one of the river’s more torturous loops, excising Duxford from the commercial waterway. No boats take the direct line, but the river still flows in the loop [adjoining the land the trust hopes to buy], where in regains its youth.

“On this thick, hot summer morning, this backwater is torpid and drowsy. Above there is the lazy drawl of a light aircraft. This is the lowest point on the river where, short of a full-scale swim, I may walk across. [I did not.] There is a fascinating mystery. This was clearly a ford of some importance (hence Duxford), but when was it last used if the river has been navigable for so many centuries?

“I round the half mile diversion and head north to Shifford Lock, invisible and inaccessible behind an intense screen of cow parsley, high purple green stems and tiny, tickly white flowers. The barrier opens to reveal another of those unexpected landmarks. Shifford Church, in butter-yellow stone, is adrift on the other bank in a sea of fidgeting wheat, its simple lines framed in trees.”

Shifford was one of the last locks to be built on the Thames. It is at the start of a navigation cut built by the Thames Conservancy in 1898. The original river wandered south in a loop to Duxford village. Nowadays you can only navigate the old river by canoe.