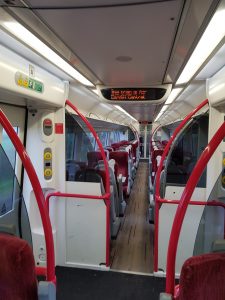 This is a significant, and rare, rejection of a road scheme, which was widely supported by the CBI and many local politicians.

Plans to build a six-lane motorway south of Newport through important wildlife habitat to tackle congestion had been backed by a planning inspector after a public inquiry.

The CBI called it a “dark day for the Welsh economy”.

But look at my photo.  It shows one of the existing train services, in this case the 08:30 from Birmingham to Cardiff on Tuesday, 9th of April 2019. And very few people chose to use it.

For anybody travelling from the Midlands to South Wales on business or pleasure, this is an ideal service, fast and on a comfortable new train. It reaches Cardiff by 10:15 a.m. giving plenty of time for a visit or a full day of business. It runs less than a mile from the congested M4 and the proposed bypass. And yet, as you can see, it is almost empty – but for our party of three and, I think, two other people in this carriage. And this is a regular working day.

Filling one largely empty train isn’t going to solve the problem here, and a major boost to public transport, not least (and fares have to be lower) train services to West Wales holiday areas, is needed. But as well as talking about radical public transport alternatives, we need to effect a serious change of mind in large sections of the public. And that includes the many people in business who could use such trains instead of automatically defaulting to cars (often company cars) to make working trips, and whose leaders in the CBI and other business organisations then automatically call for more roads when their members get stuck in traffic.

Wales last month (April) became the first country in the world to declare a climate emergency, just one hour before the UK government in Westminster also did so. This was the first tests of the resolve of political leaders in Wales to respond to the urgent need to reduce CO2 emissions .

I know the stretch of M4 well, and have used it many times over 40 years. and while I have never been seriously inconvenienced on the current route around Newport, where it narrows to two lanes at the Brynglas tunnels, with no delay lasting longer than 10 to 15 minutes, I accept that congestion and queues are a big problem.

The backers of the new road made the standard arguments, that the existing M4 here is the busiest stretch of road in Wales, carrying up to 117,000 vehicles a day, with a predicted 30% increase in traffic by 2025. The new section would relieve congestion “detrimental” to the economy. It would boost business by improving access for people and goods in and out of South Wales.

Opponents make two main points. One was the  damage to a precious wildlife area, the Gwent Levels. The second was that the road would attract and create more traffic, encouraging people to make journeys they might not otherwise have made, when Wales is already one of the most car-dependent parts of the UK, and create more CO2 emissions. So public transport will have to be part of the solution.

Wales’s Future Generations Commissioner Sophie Howe, whose duty it is to monitor the impact of projects on the future health, economy and environment of Wales, urged ministers to think of ‘shiny new’ 21st century public transport projects instead of a new road.

Some of the 21st century thinking we need could be very simple. Environment writer George Monbiot proposed deploying fleets of comfortable, well appointed coaches to lure people out of cars as early as 2006. This proposal is repeated in some detail in an excellent paper by the University of the West of England, published in 2018  alternative transport scenarios for South East Waleshttp://eprints.uwe.ac.uk/37664/1/Alternative%20Transport%20Scenarios%20for%20South%20East%20Wales_FINAL.pdf

The authors cite the example of the Kings Ferry company, which connects commuters from Kent into Central London on smart coaches with leather seating, Wi-Fi, and refreshments. A single coach at 50% capacity equals at least 20 cars. One Newport to Cardiff service, proposed in the UWE study, might take 1200 car journeys per day off the M4. There would be scope for frequent coach service between Cardiff, Swansea, Newport and Bristol, with longer distance services to London and Birmingham .

Improvements to local trains are coming as part of the South Wales Metro, which promises many new integrated services across the region. But a wholescale change in attitude is still needed, when, for many, a trip down the motorway in a comfy, subsidised company car, taking your chance that the motorway would not be too snarled up, is preferable to any form of public transport. Then there is the question of high rail fares and the difficulty in finding cheaper deals.

The report highlights the changes already afoot, such as the mood among young people against owning or even learning to drive a car, and other developments that cannot properly be predicted, which could undermine the conventional arguments for a new road. Then there are the technological changes. The report goes into road pricing, which the government might have to turn to as it loses petrol and diesel tax revenue with the switch to electric vehicles. Road pricing might turn people out of cars and into public transport.

Then there is the likelihood, at some time in the future, of solutions such as ‘platooning’, where a long line of self-driving cars behind a lead vehicle move in a convoy or platoon along the motorway, in effect a ‘car – train ‘. The UWE report suggests  platooning could increase lane capacity from 2000 vehicles per hour to 9000.

We’ve usually decided to build new roads in the past, even after bitterly-fought public enquiries. The green lobby is given its platform, everybody listens politely, they are ignored and we move on. We’ve never seriously looked at radical alternatives. They are radical because we haven’t done them before; they require the level of commitment and foresight politicians cannot usually give. And they may fail. The only thing that goes wrong with shiny new motorways is that the cost overruns, and, because they are new, attractive and free, they exceed their planned capacity.

Wales, one of the powerhouses in the Industrial Revolution, has largely lost its pathfinder role since the closure of its coal mines in the 1980s. Two opportunities to assume a pioneer role in the development of renewable energy have come and gone, although not necessarily through the fault of local politicians. The first was a proposal to make the M4 corridor the highway for developing hydrogen as a fuel for transport and industry. The second was the abandoned Swansea Lagoon, once much favoured by Prime Minister Cameron, which would have generated energy from the tides in Swansea Bay.

Now the M4 round Newport could be the place to develop innovative solutions to crowded roads. Could not Wales actually become a more attractive place in which to do business, if it was seen across the world as a leader in smart transport solutions?