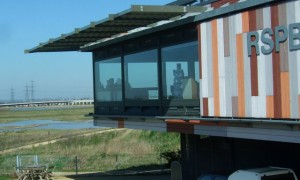 “Big skies, exciting wildlife, and a great place to walk – and all inside the M25.”

Rainham Marshes is one of my favourite wild places in the UK. I like it because of it is both wonderful and incongruous, hemmed in by the M25, clearly visible rising over the Queen Elizabeth II bridge over the Thames, by the A13 and the high-speed Eurostar line from London to the Channel Tunnel.

And it really shouldn’t even be here. This land was never built on because it was owned by the Ministry of Defence for so long that it escaped London’s overspill. It finally came onto the market at a time when spare land in clear sight of central London wasn’t automatically gobbled up for development.

I first went there in 2012, and I’m pleased to see that the reserve is thriving, and with much more background information on its website.

This is a piece I wrote then, with some amendments. I return to it now because one bird I saw with ease last year was the marsh harrier, which writer Simon Barnes described as his favourite bird in an interview with Simon May on Scala Radio recently. He now comes to London infrequently, but city dwellers might like to know that they don’t have to follow him out to deepest Norfolk to see this magnificent bird.

And the Cetti’s warbler, the reason Barnes and his wife bought their house on the edge of a marsh – that’s here too.

On the Marsh: A Year Surrounded by Wildness and Wet. Simon Barnes, Simon & Schuster Ltd.

Murder came with a sudden pounce, out on the marshes, under a clear blue sky. The victim struggled and wriggled and flailed helplessly, but its assailant was too strong, and had clearly killed before. All over in seconds. With one gulp the heron swallowed the marsh frog whole. The nearby cows scarcely looked up.
Business as usual, then, on one of the Royal Society for the Protection of Birds’ (RSPB) most intriguing nature reserves.
I’m half way into the two mile circular walk around a remarkable green space. One of the local star choristers lightens the mood with not so much a lament for a dead frog, as a joyful “lets-all-move-on” spring morning aria, at about 100 notes a second.
“Reed bunting“ said my guide, proffering his HD binoculars and pointing to the thicket. However good the TV you have at home, the picture of real, live nature you see through these – you can hire them in reception – is even better.
At this moment, it’s just us, apart from the odd bird watcher. Right here, face to face with about 800 specific examples of nature (it says on my helpful species checklist – from red throated diver, via many beetles, amphibians, moths and slugs to the yellow iris). But this is no wilderness, deep and remote in the countryside.

To describe the Rainham Marshes reserve’s hinterland as busy is a statement of the obvious akin to saying Trafalgar Square is crowded on New Year’s Eve. A few hundred yards away to the north, a sinuous Eurostar glides past on its way to Paris, giving 600 passengers a tantalising 14 second glimpse of incongruously rare and precious. A little to the right, I see the endless surge of M25 traffic cresting the QE2 bridge.
Directly behind me a cruise liner creeps up the Thames. Tracking around the compass, I can plainly see Canary Wharf, 9 miles away. Behind it is the London Eye. The big iron sculpture, Orbit, is away to the north west on Olympic Park. And there’s the A13, a dull roar in the distance. Only the skies are quiet. The wind is in the wrong quarter for the Heathrow flightpath.
Could the pair of redshank and scatter of lapwings, tottering around the marshy islands, care less? All they need is a place to breed and feed, and play out their role in a complex food chain. Nothing disturbs the bird life here except the urban fox, and the occasional cat. And there’s a fence to keep them out.
The RSPB is one of the biggest creators of wildlife habitat in Europe. It wants people to have a good, interesting and inexpensive family day out. No prior knowledge of birds needed. You don’t need to know the difference between a Caspian gull and a Mediterranean gull – both are seen on Rainham. There’s an expert on hand to tell them apart.
I’ve been briefed to find a typical, family-friendly reserve, full of wonder. My first thought was to head for a reserve in the Cairngorms or deepest East Anglia. Surely that’s where the ring ouzel and honey buzzard decamp for the summer? But the RSPB has 200 reserves, and this did not have to be complicated. So I looked up the closest and easiest reserve of all, less than an hour away from millions. Rainham, in the uttermost fringe of London, edging into Essex, leapt off the RSPB’s web site.
I took a day return from Fenchurch St. 28 minutes later I had plunged back, ornithological speaking, to a landscape not so different from the one Henry VIII’s mariners would have seen as they sailed down the Thames in the 1500s. 411 hectares (1015 acres). To bring the comparison up to date, that’s 411 is the size of the Emirates stadium, where the Arsenal play football.
The biggest wonder is that this ancient London landscape was not smothered in houses or factories years ago. We have war to thank. In 1906, with the promise of all-out conflict to come, this flat grazing habitat became a military firing range. Many a doomed First World War infantryman learned to shoot here. The original butts still stand. I once spotted them from the Eurostar, as I concluded how unimportant this nondescript piece of land must be.
The marshes were closed to the public for a century. Even then there were high hopes of putting it to profitable use. One option was to site Euro Disney here. Fortunately good sense prevailed. In 2000 the Ministry of Defence sold the land, by now untidy urban fringe frequented by teenage motorcyclists and dog walkers, to the RSPB.

It became a very 21st Century reserve, born in tight economic times.
The mosaic of tussocky grassland, left deliberately flooded in places, opened to visitors in 2006. Not a lot has to be done, except some work to ensure it doesn’t dry out in drought. A herd of 100 cattle keep the grass in good shape for wildflowers and birds.
The birds didn’t need encouragement to flood in, either as permanent residents, or as summer or winter migrants. The live-in extras were already there, including marsh frogs and water voles (Ratty in Wind in the Willows) whose population has grown to over 7000, making this a British stronghold for this beleaguered creature.

The British weather is the snag. But they thought of that, making plenty of viewing space in the cosy, architect-designed visitor centre, and the several, very comfortable bird watching hides spaced out around the perimeter path. You can sit in a solemn silence fit for the Long Room at Lords and watch little egrets and short eared owls, and even a peregrine popping in for a wildfowl takeaway.
They flag up the reserve’s family-friendliness. Theme parks are expensive. Family entrance to Rainham is just £. There is a playground and children’s adventure play area, and bird-related information material – providing just the sort of exposure to nature that might inspire this century’s David Attenborough.
The wonderful thing about nature is the performance changes every day. I looked in vain for the “star species”. The avocet, “delicate legs and piping ‘kluit’ calls”? Invisible. The ringed plover, performing its “run and stop” feeding routine. Absent. But the stand-ins, some wheatears, probably en route for some northern moorland, and a chorus of chiffchaffs and blackcaps in full song, easily made up for them.
I was going to say Rainham is the perfect destination for tough times. But then I found pure indulgence back at the visitor centre, excellent coffee and  scrumptious home-made cakes – there’s a sticker saying who made them – neatly undercutting those well known High Street names.
On the way back to Purfleet Station I wondered where to place Rainham among the spectacular places around the world where I’ve seen wild birds over the years. I would put it high up on the list, a cheering example of nature’s ability to make a home petty well anywhere.
And I think Eurostar should issue its passengers with binoculars, to give them a brief glimpse of avian heaven as their train speeds past.

Saturday 1 April. Start of “This Girl Can Month”: Natures Gym (ladies only)

Dawn Chorus Walk
Sunday 7 May and Sunday 14 May
4-7 am.
Booking essential.