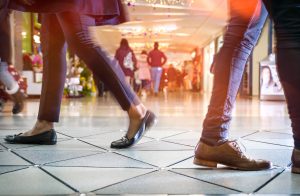 UK “energy and data from footsteps” firm Pavegen has launched (May 28th, 2019) a crowdfunding campaign to raise the additional £5m it needs to expand production of its revolutionary V3 energy generating tile, and make it at a lower unit cost.

Pavegen, founded by Laurence Kemball-Cook, the company’s CEO, in 2009, came up with the idea of an energy generating floor tile intended mainly for public spaces, which converted a simple footstep into off-grid power and data. The company is now the global leader in the field.

Each footstep on a Pavegen walkway, composed of its latest V3 tile, generates 2 to 4 joules of electrical energy, or up to 5 watts of power while someone is walking on it, enough to drive such things as environmental sensors, LED lights and screens. The power can also be stored in batteries.

The triangular V3 is designed to create a surface with no “dead zones”, allowing energy to be captured from almost every footstep.

The crowdfunding campaign on Crowdcube raised £1m on its first day. In addition to reducing manufacturing costs, it wants to bring its technology to more cities across Asia, North America and the Middle East.

I met Kemball-Cook in 2013, demonstrating what the Pavegen tile can do. Halfway through his keynote address to students at the Imperial College “Invent the Future” idea generation session he asked us (30 students and a few more people) to stand up and jump into the air once.

“There, you just generated enough electricity to power a mobile phone for half an hour.”

In 2012 the company fitted into tiles to a walkway at West Ham underground station leading to the main London Olympics venue. Other installations were at airports, a side street off Oxford St in London, and Heathrow’s Terminal 3 where the energy from the footsteps of passing pedestrians on 51 tiles powered LED lights in a busy corridor.

One early deployments of Pavegen technology was at a football stadium in Nigeria where tiles produced some of the energy to light the pitch.

By 2018 the company was generating £1.8m revenue, installing its tiles in retail shopping areas, transport hubs and education institutions in Hong Kong, India, Korea, Thailand, UAE, UK and the US. Another article here.

Pavegen has also developed a digital system which connects to people’s smartphones, rewarding them for steps on Pavegen walkways.