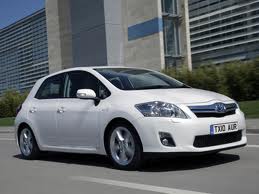 Toyota Auris - made with solar power

There’s nothing like a wind turbine to excite local passions,  and  fill village halls to bursting  with angry villagers who have nothing against  renewable energy except that they don’t want it here.

Solar panels are harder to oppose.  The best opponents of one particular scheme close to where I live could come up with was that sunlight glinting off the panels  would  upset local walkers.

As a consequence,   many schemes  are winning planning approval with little or no dissent.  And they’re getting bigger.

One of the most impressive yet to be announced  is car manufacturer  Toyota’s  plan for 17,000 photovoltaic panels  at its Debyshire plant. (The sun’s energy will be used  to make the car pictured here, for example.)

The  local authority has approved the scheme, and the company has already started work to install the panels on an area of land about the size of four and a half football pitches  inside the plant’s boundaries, BusinessGreen  reported on June 7, 2011.

Toyota says the array will be capable of supplying enough energy to build around 7,000 cars a year at the plant, which produces Auris hybrid, Auris and Avensis cars, as well as saving the company 2,000 tonnes of CO2 emissions a year.

The Auris hybrid Is already one of the world’s cleanest petrol driven cars.   It  produces CO2 emissions of just 89g/km  (under the London congestion charge limit of 100g/km)  with a combined cycle fuel consumption of 74.3mpg.

British Gas  is installing the panels, which should begin supplying power to the plant in July.   So the scheme narrowly   misses the government’s proposed cuts to feed-in tariffs for large solar arrays.

Toyota claims it will be the first UK car manufacturer to install a large-scale solar panel array and said the move is part of the company’s wider strategy of lowering the company’s carbon footprint.

Meanwhile  work to install  an array of 1512 solar panels  on a former World War II runway at Wescott Venture Park  in Buckinghamshire is nearing completion. The site owners Rockspring Property Investment Managers  say these panels will  produce the energy to meet about 9% of the electricity demand from the venture park. The next two  proposed phases will bring solar generation up to about 1.2 MW, or about 30% of the combined electricity consumption of the 70 business tenants of Westcott.

This is another scheme  to just  finish ahead of the government’s cuts to feed-in tariffs.