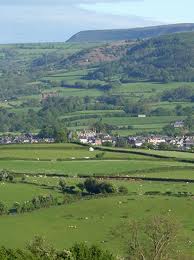 Lovely countryside – pity about the CO2

Here’s a challenge to the Hay festival organisers. Something to set up for the 2012 event, perhaps?

Start a campaign to make it possible for at least some of  the very many  celebrity guests to travel from London (where I assume most begin their journeys)  the 184 miles  to this small town in the Welsh Marches by electric car.

The Hay Festival  is a  wonderful and unique thing,  an 11-day  celebration of words, writing and ideas (with a little music)  – intellectually stimulating,  inspirational,  and downright good fun,  even if the coffee is a little expensive.

One of the reasons it works so well is because all those writers, journalists, opinion leaders, politicians  and academics are drawn together into such a tight space, a collection of marquees in a field. I doubt if  any similarly sized stretch of grass in the world contains  so many  creative people at one time.

But as I joined the celebrity-spotting on my first visit last weekend,  I had a serious nagging concern.  How do they all get there? It’s a question  that wouldn’t bother you at a cultural event in London. People would have  walked, taken a  taxi, bus or the underground. Increasingly people would have cycled there.  But in Hay on Wye,  you can’t dodge the plain fact that  most people,  journalists, publishers, speakers and the general public, travelled  a long  polluting way by car.

If  organizers were casting around today for a  place to found  the world’s biggest literary festival  in our  CO2-challenged times,   they would probably  not choose  a  beautiful but far-flung  town way beyond Gloucester.

To be fair to the festival organisers, they push public transport  hard.  So  I’m sure a  fair number  did  make the three hour 20 minute  train journey from London  to Hereford,  then joined the shuttle bus for the last 22 miles leg to Hay.

But, apart from the  Duchess of Cornwall, who came by helicopter, a big number,  surely the majority, did not heed the call to  use public transport and instead   journeyed the 184 miles by road.  (The AA  times that at 3 hr 43  minutes,  making the total time about the same as the rail trip.)

The Festival  already  has a keen commitment to the environment, which should help. All the energy on site is from renewable resources; the water for the catering facilities is heated by solar panels and low energy light bulbs are used in the marquees.   All  rubbish is recycled.  People are encouraged to drink good fresh tapwater,  not troll around all day with those effete plastic bottles.

In an article for the festival’s  principal sponsor, the Telegraph,  Geoffrey  Lean reported on the deep green consciousness in the villages around.

The small village of Talybont-on-Usk,  20 miles south, is  generating energy from a  turbine on the water feeding a nearby reservoir. Since 2006,  villagers  have  sold electricity  to the grid,  funding electric bicycles and solar panels,  to generate more income. The village of Crucorney has set up its own energy company and installed solar panels on its village hall.  As for Llangattock, it aims to be carbon-neutral within five years.  By later this year , a quarter of its 420 homes  should be generating solar electricity from their roofs.

So plenty of potential support then for that symbolic electric journey  from London.  Now one car,  the very expensive Tesla Roadster, could make the journey already as its battery has a 200 mile plus range. But if you take a more mainstream model such as the Nissan Leaf,  which has a range of  less than 100 miles,  and closer to 60 miles  according to some, there are going to have to be battery  charging stops on the way.

But the good news is that we are no longer talking an eight-hour charge, via a wire out of somebody’s kitchen window  (that’s Level 1: 120 volts). It’s not even four hours (the 240 volts charger, or Level 2).  An electric car  battery can be be  replenished up to 80% of its capacity, here and now, in between 20 and 30 minutes  through the new 480-volt Level 3 DC charger.

So the trip from London to Hay Festival is probably going to have to incorporate two stops of about half an hour each to give the vehicle enough power to reach the festival site comfortably, without some  concluding “Will we, won’t we” range-anxiety panic  along those beautiful twisty roads through the foothills of the Brecon Beacons.

Fanciful?  Certainly not. 480-volt Level 3 DC fast-charging stations are already being installed.   There’s one,  for example, outside a Walgreens in Dallas, Texas. More are going to be sprinkled  along Interstate 5  in Southern Oregon this year,  the first stage in  a proposed “Green Highway”  along the the West Coast from  Mexico to Canada.

And the Irish government is pushing ahead with a programme  to install  the electric vehicle (EV) charging points all over the country. It wants every town with a population of more than 1,500 to have 30 or more DC fast chargers.

One answer would be for the Highways Agency to install fast electric chargers  at each service station down the M4.  Alternatively they could be placed in  hotels  on the A40  (the alternative route west)  where visitors  could stop for a break while the car was charging.  (David Peilow has really shown how this can be done,  promoting a network  to charge the Tesla  the length of the UK. Click here.)

The local council, the festival organisers, the people running camping sites,  hoteliers, and the nearby, and seriously dark green communities  can take a slice of the  action, by installing the less expensive Level 2 charging stations. (Once people are there,  they won’t have the pressing need to recharge quickly.)

There is the opportunity, too, to meet the other objection  to electric cars, that they simply shift the source of carbon from the petrol pump to the electricity meter. EV drivers are already demonstrating that their cars can be  powered using energy from renewable sources. (Robert Llewellyn’s blog.) There’s a new type of solar canopy (yes, the sun does shine occasionally in Hay), a bit like an open bus shelter, from the company Use the Sun.

Its structure consists of a steel canopy covered with 45 photovoltaic panels.  Power is fed to six chargers at any one timer from solar and mains electricity.

And applying the “dog not only the Christmas” argument,  this pretty little town is a draw throughout the year. Fitting electric charging points immediately gives hotels, restaurants and other local businesses a touristic advantage.

But how does a little place in East Wales go about lobbying for a electric car charging infrastructure to be set up on the road from London?  More easily than you might imagine.  Studying the programme on my visit, I was amazed by  the list of speakers, men and women of such political influence  and media reach, who journey to Hay.  It is an annual pilgrimage of movers and shakers with very few parallels anywhere.  Enlist their help. The issue could ignite the Islington  dinner party circuit.

My hunch is that some kind of kind of EV charging infrastructure will be be firmly in place in five years time on the way to Hay. But why wait?  Set something up by the next festival in May 2012, and  steal a two-month march  on the the London “green” Olympics.