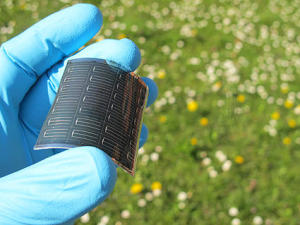 It’s been hard to feel particularly positive about the  state, and future, of the planet  over the past few days.

Record global CO2 emissions, after a fall during the recession.  Germany easing back on nuclear power.  Ongoing climate change denial among the crazy right in the US.  And in the UK, a huge number of column inches for the climate change minister, not because of the ambitious carbon reduction targets  he announced last month, but because of his alleged misdemeanours. Finally (though probably not) there’s the growing  mobilisation against onshore wind turbines in Britain,  most recently in mid Wales.

Yet here we have Mark M. Little, global research director for  General Electric  boldly predicting that solar power may be cheaper than electricity generated by fossil fuels and nuclear reactors within three to five years, because of innovations.

And, from Switzerland comes the news that flexible solar cells have achieved a world record light-conversion efficiency.  Why is  a 1% jump important?   It  may not sound much,  but  experts consider it a significant  advance, in the context of   what was already “constant incremental improvement.”

First, that statement by Mark M. Little. Granted he speaks for one of the biggest players in  solar energy, but it follows other recent  expressions of confidence, including one by Ray Noble, a solar PV specialist  at the Renewable Energy Association,  who  told the Guardian: “The cost of solar is falling, because solar panels are getting cheaper and the labour costs are coming down as bigger players and more competition enter what was once a cottage industry.”

GE’s Mark M. Little told Bloomberg in an interview  that if the price could come down  to 15 cents a kilowatt-hour or lower, “which I’m hopeful that we will do”,  it would be cheaper than energy from carbon sources – principally oil, gas and coal–  in some US states.. The 2009 average  US retail rate per kilowatt-hour for electricity ranges from 6.1 cents in  to 18.1 cents.

GE said in April it had boosted the efficiency (the amount of sunlight converted to electricity on  the latest thin-film solar panels) to 12.8 percent. The thin-film panels will be manufactured at a plant that GE intends to open in 2013.

The cost of solar cells, the main component in standard  flat solar panels, has fallen 21 percent so far this year, and the cost of solar power is now about the same as the rate utilities charge for conventional power in the sunniest parts  of California, Italy and Turkey  according to London-based research company Bloomberg New Energy Finance.

Standard solar panels use silicon-based photovoltaic cells to transform sunlight into electricity. The thin-film versions, made of glass or other material coated with cadmium telluride or copper indium gallium selenide alloys, account for about 15 percent of the $28 billion in worldwide solar-panel sales.

Meanwhile, this week (June 1, 2011) scientists at Empa, the Swiss Federal Laboratories for Materials Science   and  Technology, achieved a light-conversion efficiency of 18.7 percent, a new world record, on flexible solar cells made of of copper indium gallium selenide (CIGS).

“This milestone, about 1% higher than the previous record, might seem like a small step forward, but when looked at in the context of constant incremental improvement, it is significant. 1-2% multiplied by many gigawatts of capacity makes a huge difference.”

Scientists have been trying for years to develop a low-cost solar cell, which is highly efficient, easy to manufacture and has high throughput.  According to Ayodhya N. Tiwari, who leads the  team at Empa’s Laboratory for Thin Film and Photovoltaics, flexible and lightweight solar cells with the new efficiency ratings could bring about a “paradigm shift and  usher in low-cost solar electricity in the near future.

Flexible cells like these can be manufactured by “printing” them with a roll-to-roll process, further reducing their cost.  And because they are relatively light and flexible, they can be used in more places than the heavier and more rigid polycrystalline silicon cells used in flat panels.