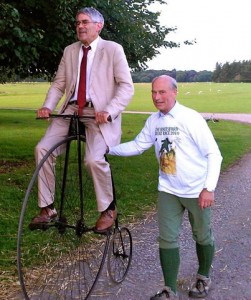 The writer riding high - but for a fall? Photo - Steve Adamson.

For a split second after this photograph was taken, I had a vision of calamity. Flat ground was turning into a slight slope. And I was heading down it, at what seemed to be alarmingly increasing speed.

A group of penny farthing diehards had gathered in Tatton Park, Cheshire, to demonstrate this ungainly machine, which briefly dominated personal transport in the 1800s. They were publicising the Knutsford Great Race, the fourth running of the once-in-10-year international penny farthing race.

Younger, and more agile, men (and a woman) had shown me how to do it.  Their nonchalance was infectious. How could I refuse the challenge, and with such expert help at my side?

We are used to fussy health and safety notices, but the reminder, before I started, that penny farthing riders can’t be insured is at the extreme end of advice to look after yourself. I mounted with one foot on a little bar, and the other straight onto the pedal at the centre of the big wheel. It has to be a quick and decisive movement, or you fall inelegantly off at the first attempt.

Once that great wheel starts turning, this is exhilaration of the highest order.  Could I have cycled without such obvious support from the man on my left? We will never know. Then everything started to go downhill.  With supreme concentration (or was that just good luck?) I managed to stay upright as the machine gradually gathered speed. It was a very narrow margin between a serious smashup and a gentle dismount.  Somehow I managed the latter.

I hadn’t intended to write a penny farthing that day, but I’m so glad I did. It connects me directly to a whole generation of brave and foolhardy 19th-century riders, who raced these machines with a minimum of personal protection, and were the Formula One drivers of their day.

The first rule of the Knutsford Great Race, which takes place on Sunday 5th September 2010, is that all riders must wear helmets. There is a peculiarly terrifying mishap in this business, which is flying like a human cannonball over the handlebars when that front wheel hits something and the bike comes to a juddering dead stop.

The Great Race is a unique event, held every ten years since 1980.  It will celebrate the three styles of two-wheeler that preceded the modern bicycle — the original Dandy Horse Machines, Bone-Shakers and Penny Farthing Cycles dating from the middle of the 19th Century. Riders from around the world have entered, and the list of competitors has now closed, at 50 teams. It will be run at Moorside in Knutsford, and started with a great big boom from a cannon that was present at the Battle of Waterloo.

Inevitably, new technology has intruded on the Victorian ethos. Riders will be issued with an electronic transponder, enabling the course marshall and race commentator to know exactly who is winning, and how many laps each rider has completed. The winning team will be the one that completes the most circuits of the one kilometre Moorside Circuit within three hours. The race begins at 2.00pm.

The Hobby horse was the first bicycle, invented by Baron von Drais in Germany. It arrived in England in 1819.  It was a smart thing for dandies and the upper classes to be seen riding, but it was impractical as a means of transport or for racing and the fad died within the year.

It was followed by the Boneshaker, a two-wheel pedal “velocipede.” Technical improvements, particularly the wire tension wheel, enabled the boneshaker as it soon became known, to morph into the elegant and practical high wheel bicycle.

This was the Penny Farthing. Enthusiasts still refer to it as the “ordinary”, because before the safety bicycle was invented in 1885, that is what it was – the ordinary bicycle of the day. The first bicycle with wire wheels reached England in 1870 and the style quickly replaced the wooden boneshaker, which had itself only been in use for two years. During the next twenty years around 250,000 “ordinaries” were made.
The reason for the big wheel was simply to gain extra speed. So racers would ride the largest wheel they could bestride. On a 60” machine in 1882 Englishman H.L.Cortis became the first person to cover twenty miles in an hour. Ordinaries were efficient and comfortable and even when carrying luggage, huge distances could be covered on the bad roads of the day. One hundred miles in a day was commonplace.

But the “ordinary” had one flaw.  Unlucky riders suffered (and still do) the “header”, the involuntary dismount over the handlebars. Victorian urchins would bring riders to an abrupt halt by putting sticks through the wheels.

Most of the machines in the 2010 race are original, some made by marques which later became famous in the motorcar and motorcycle world, such as Rudge, Humber, Singer, Hillman, Triumph, B.S.A., Swift and Rover.

But the Penny Farthing was short lived. In 1885, the first chain-driven bikes were introduced. Shod with pneumatic tyres in 1890, they brought about the early demise of the “ordinary”.