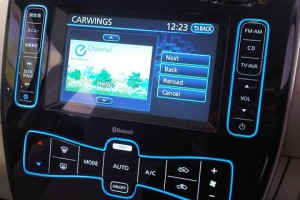 Now here is is a problem that is on its way to being solved — at least in certain areas — even before you can before you have time to worry about it.
It’s that peculiar neurosis that affects drivers of electric cars, the fret about not making it home to recharge their vehicle before the battery runs out.

The new Nissan Leaf, due on UK roads in February 2011, can do about 100 miles on a full charge. Now you can easily use that up in a day’s pootling about, once you’ve thrown in the school run, trip to the supermarket and that unplanned station pickup.
Early adopters living in London, Milton Keynes, and the North East can now expect to find a supporting network of public charging points as soon as they pick up their new vehicles.
There should be over 2,500 chargers, in car parks, on the street, at shopping centres and workplaces, by early 2011, with over 11,000 in the next three years to follow.
The West Midlands, Greater Manchester, South Yorkshire, Cumbria, Cornwall and Belfast also submitted strong bids in the first round and their plans will be looked  at for the second round.
Chargers come in different versions: slow will recharge in about eight hours; medium will take two to four hours; and a fast charge should be done in about 30 minutes.
Software in the car will tell drivers where the nearest charging point is, and an app for the iPhone should be able to tell the driver how the charge is going while he or she sits with a coffee in a nearby cafe.
The plan is that you’ll be able to pay to charge up your battery with the swipe of a credit card.  Before too long it should be possible to plan longer trips, on a scale of Birmingham or Manchester to London, with a 30 minute “refuelling” break at a service station on the way.

Siemens is one of the companies bidding to provide a service, taking care of the whole refuelling experience. It says it will provide electricity from renewable sources whenever possible. This is the other crunch detail in the argument, as in “how green is your electric car?”
If you refuelled with electricity from a coal burning power station, your Nissan Leaf would be no better than today’s standard new family saloon, producing around 150 grams of CO2 per kilometre.  Taking the mix from all the fuels — coal, gas, oil, renewables — used in our power stations,  its output would still only be 75g/km, not a great deal better than the keenest diesel cars. But it’s a start.
* In London 7500 charge points will be installed by 2013  (6000 points at work places, 500 on-street, 330 in public car parks, 50 at Tube stations, 140 in supermarket car park and 120 for car clubs), with 1,600 charge points to be in place over the next twelve months. The Mayor’s target is 25,000 charge points in London by 2015, with no Londoner more than a mile from a charging point by that time.