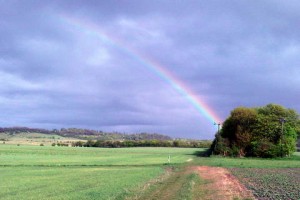 So many enticements to rise from your desk and head for those hills, and streams, and woods, and valleys.

It was more than four years when this Area of Outstanding Natural Beauty, only 30 minutes from London, first came under siege from the idea of HS2, the high-speed railway which is due to charge through this splendid landscape sometime in the 2020s.

I searched around for some good news to celebrate the Chilterns on this fine spring Friday and found the recently published proposal for a £1.85 billion tunnel, 24.7km or 15 mile long, which would pass under much of the AONB.

The idea came in a study, commissioned by local councils and the Chilterns Conservation Board, and was published in late April (2014).

The cost would be only 2% of the overall budget for construction. There would be further savings in compensation which would not have to be paid, and the tunnel would make the line cheaper to run, it is said. The case for it seems overwhelming. It’s just the sort of idea which political parties agree to just before a General Election. Let’s see.

This is an account of a walk I took on the Chilterns not so very long ago.

The turbo train roared away and deep peace descended on Great Missenden station. In the old days of country railways there would have been clanking milk churns and cooing racing pigeons in straw baskets.

Now the only sound was the unfolding of my map and a rhapsody from a nearby wren. In the dead centre of the Chilterns, my walking options were wide. ‘Choose me,’ chorused about 50 footpaths, leading to all points of the compass. But there was no contest.It isn’t every day you can walk along a brand new chalk stream.

The Chilterns is a South East England national park in all but name. Four key words sum up this precious area: hill, wood, village and stream.However, drought and pumping for domestic water supplies have been sucking dry the famous watercourses. Take away streams like the Chess and the Ver, the Gade and the Whistle Brook and the Chilterns faces relegation to a lesser landscape league.

When I last saw the Misbourne in 1990 it was an ex-river, a bone-dry depression in a meadow. The water firm announced a recovery programme shutting off the pumps. Two winters of heavy rain did the rest.I set off, past the bookshop where John Major bought his Christmas presents when he lived in nearby Chequers, and soon found the promised stile into the cow field. Ahead was a sight to make the cynical walker’s eyes mist over, an ecological miracle: the Misbourne reborn.

It looked pure enough to drink, snaking across the meadow in its old channel, swift and deep.By next summer conservationists expect river wildlife to return; plants dormant for years, like mint and sedge, ranunculus and water forget-me-not. There might be kingfishers, even an otter.

I passed the source, a large pool near the Black Horse pub, and struck north on the South Bucks Way. Sensible boot prints pointed to my first hill. The whole of Coneybank has been given over to picnics, Easter egg rolling, whatever you like.

Time to plan my day.An area of outstanding natural beauty, the Chiltern Hills, is arguably the most accessible high quality landscape in Britain. It took me just 52 minutes from Leicester Square, by Tube and train.

I planned to spend the day walking, then return to London on another railway line – there are 13 Chilterns stations to choose from.This year the region became closer still, with the publication of four new 1:25,000 scale Ordnance Survey maps. Coneybank was just the place to put them side by side and tease out delicious cartographic possibilities.

Perhaps a saunter down Hogstrough Lane? Or a picnic on Parslow’s Hillock? The Chilterns extends from the Thames above Reading to the M1 at Dunstable, with a little island just beyond Luton. Forty-five miles long, it is nowhere more than 14 miles wide. Millions rush through each week on the many rail routes, motorways and roads that cut through or around the hills. The M25 slices off a tiny sliver near Chorleywood.

With the choice of 1,200 miles of footpaths, I took a path that wanders through the secret middle, linking with another that balances along the spectacular edge.In the first hour the South Bucks Way links all the elements that make the Chilterns so appealing. One moment I’m in a wood, trying to spot that supercharged head-banger the woodpecker.

The next I’m plunging down a sudden slope, flints gleaming under foot, into a vista that hasn’t changed much in 1,000 years. You find them all over, tight valleys called something like White Hawridge Bottom, where the only thing you see all day is a lumbering tractor turning over the chalky field in toffee-like slabs.Up the other side and into a tiny hamlet, with a name like Cobblers-hill – flint cottages, medieval church, trapped in a Thirties time warp.

Just like the Chilterns village, Turville, where the wartime film Went The Day Well? was set. In Little Hampden the path curls around an oak which loyal villagers planted to mark the Queen’s accession, just another memorable tree out of about 15 million in the Chilterns.

Thousands were uprooted in the 1987 and 1990 gales, including many of the beeches on which the local furniture industry was founded.The storms weren’t a complete disaster.They created small clearings, good for butterflies and flowers, and new views. Many new trees, birch, oak and ash, are regenerating.Next to the path was the Rising Sun pub.

I was its first customer of the day. It was so quiet I wondered if I might also be the last. Then, just outside, peace suddenly gave way to war as I turned right on to the Icknield Way, one of England’s very oldest routes.

Its logo, a neolithic axe, pops up regularly, proclaiming as much war per mile as the average battlefield.If the Icknield Way is the walker’s trunk road, the Ridgeway, which it joins at Wendover, is the motorway.

A section of it runs through Goring, on the Thames, and offers some of the finest views in the south of England. It clings to the Chilterns scarp, the steep edge where the land plummets away to the Oxfordshire plain. Turn a corner and the view is liable to open up from 50 yards to about 50 miles.

There’s a new star on these slopes; the red kite, easily seen drifting speculatively overhead. The Victorians blasted it to extinction, but it was recently reintroduced and is thriving here. I headed northeast to the territory of Britain’s tiniest bird, the firecrest, in Wendover Wood. Lucky walkers might just hear its zit-zit call.

The Ridgeway crosses the main A41 and the Euston to Glasgow line, but soon shakes off intrusive modern times in Ashridge, a splendid spread owned by The National Trust – Queen Elizabeth I stayed in Ashridge House. It is a popular film location. The BBC’s Ivanhoe was shot in the Golden Valley. In one of the deep and secret clefts a Saxon village was built for First Knight, starring Sean Connery and Richard Gere, then dramatically burnt down.

This path, too, has a stupendous final reel. It bursts gloriously out of beech woods on to Pitstone Hill, rare chalk downland, an ancient expanse of springy turf studded with flowers and dancing with butterflies.Just over the valley is Incombe Hole, one of the deepest valleys in the Chilterns, followed by one of the highest hills, Ivinghoe Beacon.

This is the end of the Ridgeway.  Just beyond is Whipsnade Zoo.  But I had a train to catch.  I headed back to Tring station. Central London in under an hour.

The Chilterns can be reached by train from Marylebone, Euston, Paddington or St Pancras.  London Underground’s Metropolitan Line goes to Amersham, Chesham and Rickmansworth. Ordnance Survey Maps (Explore series) 171, 172, 181 and 182 cover the Chilterns.