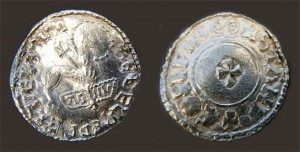 Coins from the Lenborough Hoard are now on permanent display in Buckinghamshire County Museum in Aylesbury. A room dedicated to the finds was opened at the Museum on Saturday, July 15. 2017.

The coins passed into public ownership after a successful public appeal raised  £1.35 million, the value put on the find by the Treasure Valuation Committee, to buy the 5,251 Viking and Anglo Saxon silver coins.

They will now stay in Buckinghamshire, the county where they was found in 2014, under the protection of the Buckinghamshire County Museum. (My earlier piece.)

Paul Coleman, the metal detectorist who discovered the coins in a field at Lenborough, Buckinghamshire, in 2014, cut a commemorative cake and answered guests’ questions.

The coins, a mix of Vikings and Anglo-Saxon denominations, depict the heads of King Ethelred the Unready and King Cnut. They were found buried in a protective cover of lead in a field at Lenborough, close to the town of Buckingham, in December 2014. In the museum’s previous 150 years, only 30 coins from that period had been found in the county. The hoard represents one of the two biggest finds of Anglo-Saxon coins ever made.

After their discovery, the coins were in the care of the British Museum, which supported the County Museum’s bid to buy them.The Museum launched a fundraising campaign, with the aim of purchasing the hoard. The £1.35 million value was put on it by the Treasure Valuation Committee (TVC).

The Museum raised the target to £1.5m, and will use the extra £150,000 to secure a major gallery redisplay and extension, which is planned for 2018/19. “This will ensure that the hoard can be seen in all its splendour, and understood in its proper place in both local and national history” it said in a statement.

(The TVC, which put the £1.35m value on the coins, is an advisory non-departmental public body, sponsored by the Department for Culture, Media & Sport. It comprises independent antiques or coin experts and a representative of the hobby of metal-detecting, and fixes the likely market value of treasure finds.)