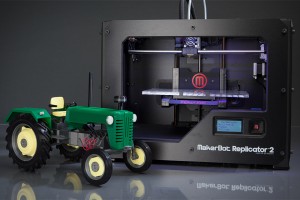 The Makerbot Replicator 2, and a handy toy it printed. We ain’t seen nothin’ yet.

So how far is 3-D printing going to go? There’s a lively debate.

(3-D printing is a compellingly simple technology. You take a CAD – computer-aided design – file of the object to be produced. Software then tells the printer how to lay down successive, minute layers of material – anything from plastic to metal dust – building up the object gradually, one layer at a time.)

I’ve just read a long and well-informed stream of comments on an article by somebody who suggested people may not want 3-D printers at home. It included this:

“I picked up [an] iPhone 5 over the weekend. Of course there were no cases available. When I returned home my wife wanted a case. One search to thingiverse.com and an hour later I had a case off a Replicator I have at HOME. [Makerbot Replicator 2 Opens the Door to High Quality 3D Printing at Home – http://article.wn.com/view/2012/09/21/Makerbot_Replicator_2_Opens_the_Door_to_High_Quality_3D_Prin/] She does not want another case… she just wants a few tweaks to this one and a new color. Total cost =  ton of margin missing for case makers, suppliers and retailers.”  (Joseph Rueter  Saint Paul, Minnesota)

So that’s something that costs £15 or so in the shop, printed out at home for a tiny cost in material and electricity.

There’s a widely held view that 3-D printing is going to bring big changes to the way we make things. New businesses will spring up to make small runs of an infinite number of items locally rather than import them from mass-producing countries such as China. The Economist magazine has even spoken about a new industrial revolution. But are we going to buy low-cost 3-D printers for the home, to print out useful things when we need them. For example I want a birdfeeder to hang in my garden. The online price is £9.99. It would be awfully nice to print one out for a few pence, right now. Or will I still take the option the writer of the original article suggests.

This was Jon Evans, writing in http://techcrunch.com:

“I agree that 3D printing will be a serious threat to manufacturing as we know it. But not at home. That doesn’t make sense. Instead, we’ll have two kinds of communal 3D printer shops.

In high-infrastructure areas, there’ll be a clutch of online providers (and I expect one of them to be Amazon.com): you’ll pick your 3D design from a huge online menu, send them size information and maybe a few photos from some kind of cunningly designed app, tweak the 3D preview until you’re happy, and they’ll print it out in some vast warehouse full of high-end high-speed 3D printers and ship it to you, possibly that same day.”

“Sorry but that’s like saying in 1985 that no one will use desktop printers because they are dot matrix, low resolution, slow and monochrome. It turned out to be wildly incorrect, mostly because the technology of desktop printing progressed dramatically.

“Early identical comments were made about personal computers, desktop printers, color printers, laser printers… you name it. Kids + toys and Kids + school projects alone will account for a huge amount of home use and that’s just the obvious low-hanging fruit. People don’t want to order and wait the way the author describes.”

To illustrate how little we know about what we might need or use even in 10 years time, several people referred to the now laughably modest predictions in the 1980s about how much memory home computers would need in the future – famously Bill Gates said 640K of memory should be enough for anybody’. And “There is no reason for any individual to have a computer in his home.” – Ken Olsen (President of Digital Equipment Corporation) 1977.

“Here is a very unrealistic (now) but possible (in the future) scenario:

Company A creates 3D models of a toy, instead of manufacturing in China, they sell them online with instructions.

Parents buy the models, print them and build the toy with their kids, which makes the building more enjoyable than playing with the toy.”

“I totally agree with the consensus of the comments. It is completely a matter of scale and cost. If you could have a device that would let you construct anything for a low cost, and that device was relatively small and cheap, why would you not buy one? What if that same device were very expensive? In that case, yes, there would be shops offering the service. Sure, 3D printers are relatively costly, imprecise, offer limited choices of materials, and those materials are themselves costly. But … it is folly to predict limitations to them in advance. My prediction is that 10 years from now each of these factors will have advanced further than most of us would have guessed today.”

Will Stone · University of Michigan, chipped in:

“You can buy a great 3D printer for $499 now (solidoodle) – nearly the same cost as a high quality/professional grade 2D printer! And, of course, the price will only decrease over time.

I’ve used mine to replace broken hardware around the house, print coat/key/sunglass hooks on demand, a better dock for my phone (which I now sell on techneesh.com). Most of the little things (e.g. hook for my keys, or a toothbrush holder cup adapter for my bathroom) take less than 5 minutes to design and 5-10 minutes to print.”

The fact that a lot of bright people are talking optimistically about the future of 3D  doesn’t mean that it will do all the things that some crystal ball gazers envisage. We still have the real prospect of hype running ahead of what is practical, or what people want. But I have an experience of my own that may cast some light.

I was writing an article on new technology for the Sunday Times in the early 1990s. I sat in somebody’s car in the City holding one of the very first car phones – it came with a big battery pack –  and called my family. It was the size of a large brick and just as heavy. Imagine it – a telephone you could use in the street, without wires. I had not a clue where it might go.

Who foresaw then that this device would evolve into an affordable sophisticated mobile computer, with so many unimagined functions?