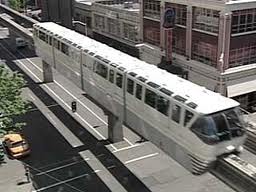 The campaigner in Grassroots built his election platform on extending Seattle’s monorail.

I have been to see the film Grassroots, directed by Stephen Gyllenhaal  based on the book Zioncheck for President by Phil Campbell.

It’s the story of Grant Cogswell, a naive environmental zealot in Seattle who campaigns to extend a short stretch of monorail throughout the city.

In 2001 he runs against the incumbent local councillor in the city elections on this single issue, and, in the film at least, succeeds in building a powerful and well-supported platform.

Did he succeed? I won’t spoil the ending, but the city still has just that one line of elevated track, built in 1962 for the World Fair. Could the sort of grassroots politics he espouses make a difference, against entrenched political power, even in a liberally disposed city such as Seattle? And, for the sake of this argument, over here in the UK?

That’s the question, the importance and relevance of grassroots politics, especially amongst the next generation of political voices, discussed in the subsequent session chaired by Gyllenhaal in the Cineworld Cinema in the Haymarket, where the film was screened in front of an audience made up largely of politics undergraduates from London universities.

The film itself is made ably enough to the conventional formula. Guy with a dream (Cogswell, played by Joel David Moore) coaxes a friend (Phil Campbell, played by Jason Biggs) to join his fight, to persuade the city to extend the monorail. Their entry into serious city politics is initially amateurish, but, once the candidate has been on television, he gains credibility and support. There are strong and convincing performances by the two male leads.

The romantic plotline involves agent Phil’s girlfriend walking out on him when the campaign takes over her house. Will she be back? Campaign builds momentum, without the subterfuge and brutality you might find elsewhere – this being Seattle – and the director creates a quite believable ending. (A line at the start of the film did say it was mostly true.) And he is brave to take local politics and make an entire film out of it.

So this sort of grassroots activism relevant, in the USA and, more importantly, in the UK?

Stephen Gyllenhaal managed to extract a half-hearted commitment from the young audience that they would (some of them) stand for office one day, and (more of them) involve themselves in a political campaign. On his left hand sat a young and personable politician from the Respect party, whose leader recently won a Parliamentary by-election in Bradford. Is that clear and undeniable proof that grassroots politics can work?

I’m personally very sympathetic to the optimistic case the director advances for grassroots politics although I have long personal experience with one of the main parties of the hard and difficult struggle in getting people elected in the first place, and seeing them achieve little even when they are elected, except at an entirely parochial level.

Under the current political system, at local council level politicians have little power and even less money to spend. It’s hard, using the conventional approach, to persuade a ruling party made up of cautious, slow to change and in many cases naturally conservative and unimaginative individuals to take action, and then turf  them out when they they don’t.

And even if power does change hands, the newly elected find council powers have been trimmed back by successive governments, and now there’s no money to spend anyway.

The ponderous and unresponsive system we have, where even a 50% turnout is a cause for celebration, is unlikely to change in the near future. The electorate itself doesn’t seem all that interested, recently turning down even a modest change to the voting system, the idea of proportion voting.

So even successful grass-roots campaigners may find they come up against the implacable brick wall of political reality in the UK and get very little done.

What about the Parliamentary process? The public have strong views on all sorts of issues, ranging from a desire for action on global warming to the return of the death penalty. They’re certainly single issue, although I’m not convinced they really count as grassroots. But let’s put that aside.

Even if they are, taking them forward through the Parliamentary process is extremely difficult, and (happily) I believe, impossible in the case of hanging. Standing as a Parliamentary candidate committed to action on global warming might gain many people’s vote, but even if that candidate was successful it would be highly unlikely to accelerate government activity in this area.

Under the UK Parliamentary system, a voice of one in the House of Commons (just ask the single Green MP) makes a very quiet noise indeed. Ironically, for the next two and a half years at least, the party in the UK best placed to make the dominant Conservative party deliver on meaningful green action is the party currently held in least esteem by the young, the Liberal Democrats. The party recently made it clear that it was determined to force action on this issue, and as a Coalition partner it clearly still has influence in government. Would the committed political activist interested in the environment still be better off espousing the philosophy of a particular party which would want to deliver on wind turbines and electric cars and fuel cells as well as monorails?

I didn’t stay to the end of the discussion, so I don’t know if grass-roots politics was more precisely defined. Does it have to be local? Or merely single issue? And is it always good?

Take the UK independence party, UKIP, which is in being, effectively, to deliver on a single issue, taking UK out of the European Union. It certainly has lots of support, and among people who might normally support other parties that are prepared to back its candidates on the single issue in general and local elections.

The party would argue that it is in business to deliver a general good, even though its aspiration is essentially to stop something happening, that is stop us being in the EU.

One of the other main campaigns, which you could readily identify as grassroots, of our time is also entirely negative. That’s the campaign against the proposed high-speed railway between London and Birmingham, HS2. And all around the country you could pick up similar smaller grassroots campaigns, with the very serious intention of stopping windfarms, new roads, power stations and supermarkets planned, as the campaigners see it, in the wrong place.

And should the government decided to give the go-ahead to the third runway at Heathrow Airport, rest assured that a powerful grassroots campaign to stop it would spring up up within hours.

Ironically this may be the very sort of grassroots activism that works, because elected politicians fear for their seats if those proposals go ahead.

From the candidate’s standpoint, there is one way to change this game, and Stephen Gyllenhaal referred to it in the debate, even though it wasn’t available for the campaigners to use in 2001. And that is social media. It might be more effective to use it to campaign for a cause, for example a skateboard park in a village, or better cycling facilities, provided that don’t cost too much. And the person making savvy use of Twitter and Facebook and harnessing the Internet is more likely to appeal to the young, who are the voters the “establishment” councillors with the power to get things done will need to court anyway if they want to stay in power in the long term.

There are many issues on which young and articulate and determined candidates might campaign, making smart use of social media, and the wider media. Plastic bags, for example. Since 2011 shops will charge you 5p if you want a plastic bag in Wales, a system accepted by the public with little protest. In England and Scotland they are still handed out with abandon. In a random observation I saw 30 people walk out from Sainsburys on Euston station with one of the store’s plastic bags in less than five minutes yesterday. With that desperately damaging buildup of plastic even in the remote Pacific Ocean,this is an admirable single issue on which to build a campaign, and win support for a cause with which few people would disagree. And it would have the great benefit of not costing the Treasury anything. Perhaps a campaign for a ban in London, followed by other big cities?

Will this movie persuade the young people in the cinema yesterday, and their contemporaries out in the street, to take to politics, and in particular to grassroots, and/or single issue campaigning?

Many campaigning bodies, pursuing a small number of, say, environmental issues, if not a single one, prefer to lobby from outside the political establishment, and some with considerable success. On the other hand the general public does not “vote” for them. They don’t actually have a mandate. Anybody who stands for election does, even if turnout at local elections is woefully low.

Even if they’re elected, and the movie does attempt to address this point, the successful one-issue candidate cannot spend the next four years beating on about that cause alone. They would have to take a wider part in the democratic process. Some UKIP councillors, elected to local councils, do this very effectively, taking up a range of “grassroots” issues, although whether that’s to burnish their credentials or out of any genuine concern I’m not so sure. (Although it can be argued they are seeking political power in quite the wrong place anyway, as local councils have nothing to do with deciding whether we are in or out of Europe.)

It’s easy for an older observer like me to sit back and put down impetuous youth, and chide them for their naivete. And I speak as one who was enormously encouraged by the near success of the Paris students in the protests of 1968 that almost unseated a government. So, even though I’m still not sure that grass-roots politics, particularly in pursuit of a single issue, achieves very much, why not give it (more of) a go?

Let’s have sincere, committed, single-issue campaigning, for a plastic bag ban, compulsory solar panels on the roofs of new houses, for a commitment to recycle the paper cups in your local coffee shop, for cheaper rail fares, and for a commitment by government that all the energy we use in the UK should be carbon-free by 2030. And that’s just in the environment, an area of particular interest to me. What about more comprehensive mental health provision, reduction in the voting age, a wider availability of free Wi-Fi?

After all, the old ways of “doing” politics has delivered very little on any of these issues. What do we have to lose?