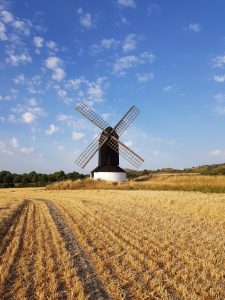 Pitstone Windmill, on the northern edge of the Chilterns AONB

The public visitors and residents), businesses and community groups have been given the opportunity to make their voices heard on the UK’s National Parks and Areas of Outstanding Natural Beauty (AONB).

Environment Secretary Michael Gove and writer Julian Glover invited the public to respond to a Call for Evidence in October, 2018. The consultation, which forms part of the government’s Designated Landscapes Review, ended on December 18. (The AONBs in Wales are not covered.)

People added their thoughts on whether England’s 10 National Parks and 34 AONBs meet the nation’s needs, and whether there is scope for the current network to expand.

Designated landscapes cover a quarter of England’s land and generate over £20 billion for the rural economy, while supporting 75,000 jobs.

The responses will form part of the ongoing review into protected landscapes – led by Julian Glover – to make our National Parks and AONBs “fit for the 21st century”.

Gower was 50 declared the first Area of Outstanding Natural Beauty (AONB) in 1956. Now the list has grown to 41, in England and Wales. Their landscape is every bit as good as national parks – that’s official. Enjoy them: there’s one near you.

My choice of ten of the best.

A supreme stretch of open chalk downland, dotted with beech woods, just 35 miles from London, for wide open walking. The red kite is back, soaring over deep, silent valleys. An easy day trip for many, cut by main roads and railways. Chiltern towns with a railway station include Tring, Wendover, Amersham, Chesham, Great MIssenden. (How Buckinghamshire escapes London’s lock – and how to take 10,000 steps between Beconsfield, Amersham, Chesham, Great  Missenden and Wendover.)

Evening glory in Gloucestershire is a Cotswolds village in golden stone spotlit by the setting sun. Take the 100 mile Cotswold Way for the high view, the length of this long, thin band of rolling hills measured out by dry stone walls.  Entry town – Burford. See “Day-trip distance from half of England and Wales, contains some of the most gorgeous landscape in Britain“.

Who said Lincolnshire was flat? The chalk hills of the Wolds stretch elegantly from the Humber to the Wash, giving fine distant views over a dreamy landscape. And in the middle the mighty landmark of Lincoln Cathedral, high on a hill.

The eerie edge of the Wash is where the young Nelson wandered, among the maze of creeks and saltings with a fog boiling off the North Sea. And every evening an avian spectacular, as wave upon wave of pink-footed geese fly in to roost. Entry town – Wells. 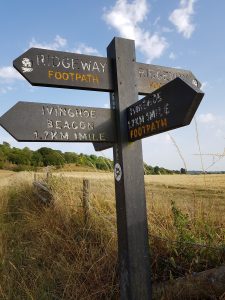 A choice of footpaths in the Chilterns

A sight to stir patriots, the First of England glimpsed as you emerge from the Channel Tunnel, a noble sweep of high, springy downs up on the right, stretching deep into Kent. Instead of bluebirds over these slopes, it’s the Adonis blue butterfly.

At its heart is the Ebble Valley, one of Britain’s deeply secret places. You only find it by accident, this line of snoozing villages in stone and thatch, linked by a sparkling river, bypassed when road rage meant oxen cutting up of flock of geese.  Nearest town – Salisbury.

For one of Briatain’s best coastline views, climb 500ft up on Baggy Point, sink into the springy turf among delicate blue harebells and watch lazy lines of surf trail in far below over acres of golden sand on immense, empty Woolacombe Bay. Entry town – Ilfracombe.

Scotland’s equivalent are the 40 National Scenic Areas (NSA). They include landscape as diverse as Upper Tweedale in the Borders, and St KIlda.