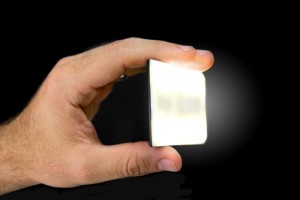 Another thing I like about Twitter. In just 10 minutes, without any help from the traditional media, I have found all I need to know about a bright new product after following a link and reading the company’s website and its well-presented press kit.

The danger here is that companies can issue whatever fanciful claims they like, and it takes careful, informed writers to pass them on so that the public is not misled. But it’s also the case that the media is increasingly under-resourced, and more and more will depend on a case for a product sincerely made, as I believe this is.

Nova is a brilliantly simple thing, the size and shape of a business card. It’s a flash – the sort that illuminates photographs. It fits in your wallet and works, wirelessly via Bluetooth, in conjunction with the camera on an iPhone or Android phone.

If you want to take photographs in the dark or in dim light you hold it up with one hand and it illuminates the subject you are photographing from your smartphone with the other.

The developer, Joe Walnes, is originally from London. He now lives in the USA, where he worked for Google, specialising in mobile and photos, before funding this project through Kickstarter in 2013.

Joe found he was using his DSLR camera less as the optics and sensor on his iPhone camera improved, and because he always had his iPhone with him. However, the built-in flash gave his photographs that unnatural flat, washed out look, images with shiny faces. So he set out to make something that would work as an independent light source.

He wrote a pitch for Kickstarter: “The camera phone takes great pictures. Over time it became our camera of choice. But looking at shots of our kids taken using the flash, they all had the same “deer in the headlights” look. That’s unavoidable with a bright white flash built into the camera, right next to the camera lens.”

His solution was to build a detached flash, with “colour temperature-adjustable” light and keep it small enough to carry in our pockets.

He asked for $25,000. 1,546 people backed the project and pledged $85,480. The product was developed and put on the market this summer in the US, and here it is now in the UK, with this boast: “For over a century, photographers used light situated away from the camera to achieve beautiful photos. Nova brings this to your iPhone.”

The website shows a photograph of a person taken with a smartphone’s flash, alongside another illuminated with the Nova. The second one, it says, has “natural-looking skin tones; smooth skin; soft shadows and depth.”

I will let a more experienced photographer say whether that is a fair claim to make, but the results looked good to me.

It has no buttons or switches. It is always on, in low power standby mode waiting to be enabled via a nearby BluetoothLE phone. You recharge its internal battery through a regular USB Micro cable. (I couldn’t find how long the battery lasts).

You choose the distance, the direction and the angle from which you want the light to come. Either hold it in your hand or position it on a tripod.

The Nova flash contains 40 LEDs behind a white panel, 20 “warm” and 20 “cool”. You control its settings through a free app on the smartphone. Move the slider on the app to choose soft, warm or bright lighting, or use built-in presets.

The website gives advice on lighting photos under such headings as “noir nights”, “dusk”, “backlit sunset”, and the “creative selfie.”

The online analysis from people who use it will come later, and failure is an option. On the other hand I wonder if smart phone photography has just had its Lord of the Rings, phial of Galadriel’s light (where Sam conjures up brilliant light from the Lady G’s gift to help save Frodo from Shelob), moment.