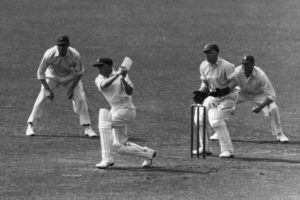 On July 11th, 1930, at the Headingley ground in Leeds, Donald Bradman became the first and only batsmen to score 300 in a day in a Test Match. It was at the time the highest score by a Test batsmen – he was out the next day for 334. His score included the fastest ever double hundred in Test Matches.

The Times commented: “to quote our Special Correspondent, he pulverised the English bowling by a display of batsmanship which, for ease of scoring, combined with absolute security, was beyond all criticism.”

It would be an entertaining exercise to put together, as your own choice, a timeline of great cricket performances, by teams and individuals, stretching back through the entire history of the game, well into the 1800s.

There are obvious contenders, such as Bob Willis bowling the Australians out in 1981; and Ian Botham’s century the day before, which made the English victory possible. Shane Warne’s impossible ball to Mike Gatting at Old Trafford in 1993.

There is the Tied Test, the rarest result in cricket, between Australia and the West Indies in 1960. The game between England and Australia in August 1902, one of the tightest test matches ever. Ben Stokes last gasp winning innings in 2019 (although more recent memories, when they can be refreshed with a glance at the ample video archive, inevitably sit higher on people’s lists.)

But there is one day, and one man’s achievement, which by any objective criteria must sit at the top of any list. The date was July 11, 1930. The performance was Donald Bradman’s 309 not out on the first day of the Third Test Match at Leeds.

Bradman became the first and only Test batsmen to score 300 in a day, and it was at the time the highest score by a Test batsmen – he was out the next day for 334. His score included the fastest double hundred in Test matches. His score remains the highest total scored by a batsmen in a single day of a Test Match.

The Times Special Correspondent noted: “He pulverised the English bowling by a display of batsmanship which, for ease of scoring, combined with absolute security, was beyond all criticism.

“To mention the strokes from which he scored most of his runs is to go through the whole range of strokes known to a modern batsmen. Once or twice he demonstrated an idea which is not generally understood, but at no time did he take anything approaching a risk. It was in fact an innings so glorious as it may well be classed as incomparable, and how the Yorkshiremen loved it.”

By the end of May, 1930, Bradman had already scored 1000 runs, the first tourist to do so. He scored four big centuries against the counties. In the First Test at Trent Bridge he scores eight and 131. In the second Second Test at Lords he scored 254, at the time the second fastest Test double hundred.

A big score at Leeds was almost preordained. At the start of the game the ground was said to be hard and firm – a batsman’s wicket. Australia won the toss but lost their opening bat Jackson for one, with the score on two. Enter the 21-year-old D.C Bradman, on his first tour to England.

“Without as a rule troubling, like ordinary mortals, to play himself in,” said The Times next day. “Bradman sets about the bowling directly he gets to the wicket, and goes on making [runs] all the time. The most ardent advocate of brighter cricket could ask no more of him, except, perhaps, that he should occasionally – say rather often than once in a 100 or so – put a ball in the air.”

The fielding of the English team was in the main “keen and efficient”. But the English bowling “was made, chiefly through the agency of Bradman, to look innocuous throughout most of the day.”

One of the chief reasons Bradman’s stupendous innings doesn’t spring to the minds of many cricket followers as one of the greatest ever is that, 90 years on, it survives only on the page of the newspaper archive. Searching online I could only find one five-minute newsreel, which contained only two shots by Bradman, and the standard bright but lifeless formula commentary which might have been describing the Prince of Wales opening a bridge in London. Even a summary of the action in The Times next day (although not the main report by “Special Correspondent”) did not introduce the feat until the third paragraph.

The most lyrical description of the day came from the then Manchester Guardian’s illustrious cricket writer Neville Cardus, in Play Resumed with Cardus. “Bradman, without in any sense forcing the pace or taking any liberties, at once took runs whenever they were offered. He scored 11 runs in one over from Larwood, which included a beautiful stroke past cover point, in which he lay right back to place the ball through the opening, and a stroke off his legs to the boundary.”

And then: “In three quarters quarters of an hour Bradman reached 51 out of 62. He scored a four (not a single six) in nearly every over, “and let us enjoy every stroke of the game save the leg glance. I have never before seen a batsmen play at Bradman’s pace and takes so few risks.”

When the ferociously quick larwood was brought on again, the Australian immediately hit him to the square leg boundary off his legs; “This is his most brilliant and drastic stroke. He makes it with his bat cracking sweet in the middle, and the velocity  of it cannot be followed by many eyes.”

He became only the third cricketer to score a century before lunch in Test matches. “Bradman’s bat”, noted Cardus, “hammered perpetually. When he ever did stop scoring for a few balls it was as though he had merely run out of the nails momentarily.”

At 1 o’clock English bowler Tyldesley actually bowled a maiden over to Bradman. “I concluded that it was one of the cleverest bits of bowling he has achieved in his hard-working career.” It must have contained some good balls, for “Not once today, in spite of of all his crashing thunder and brilliance, did he ever pay anything but respect to the really good ball.

“When Bradman achieved his 200, the scoreboard read: Australia 260 8 are42. Has ever before a Test Match batsmen made a proportion of runs so handsome as this?”

At 6 o’clock Bradman reached 288, to beat the record for the highest innings by any test much batsmen – the 287 made by RE Foster at Sydney on the 1903-1904 tour –  in five hours and half out of the grand Australian total of 414. “No ground in the world, not even in his own Sydney, could have offered him such sincere and prolonged congratulations as did the crowd at Leeds,” recorded Cardus.

He had given one reasonable chance. This happened when at 202 he lofted the ball towards mid-on, and Tate did not move quickly enough, “no doubt not expecting Bradman to fall into any manner of mortal insecurity. No chance to hand had he given and not more than three strokes had he shown which told us that it is human to err.”

Before close of play Bradman’s score rounded 300. He had hit no fewer than 40 fours. From the last ball of the day he struck a superb drive through the covers, “a stroke handsome enough for any batsmen who has ever did honour to cricket.” It was his 42nd boundary.

Cardus was in raptures. “Bradman’s innings was the most remarkable I’ve ever seen… for mingled rapidity and security it is unparalleled in my experience.”

Bradman was to score another triple century, an innings of 304, at Headingley, Leeds, on the next Australian tour, July 24, 1934.