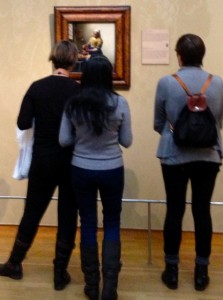 Six things you must do in Amsterdam More canals than Venice, knockout art by Rembrandt and van Gogh, the mass seduction of flowers, Renaissance architecture, a whole nine streets of independent shops. No wonder Amsterdam is one of our favourite destinations in Europe. GHD draws up his don’t miss list of things to do in the elegant Dutch capital.1Glide ruleMany city trams start outside the Central Station (you arrive here from the airport) and most city centre hotels are on, or close by a route. Buy tickets, either for the hour (€2.80) or the day (€7.50) from the GVB office just opposite the station. (You need to touch the reader with your card on entering and leaving the tram.) Ride the tram to glide imperiously around the old centre and glimpse the city’s architectural glories – C16th brick houses with stepped gable façades, the 17th baroque Golden Age buildings, and the neo-Gothic of the 1800s. Amsterdam has more canals than Venice and more bridges. The streets are full of cyclists. They are fast, confident and many don’t use lights at night. Be careful and don’t stray into their lanes. 2Buyers’ delight.Dont look for the well-known retail names in the city centre. For the serene antidote to the bland, “could be anywhere”, shopping mall, head for the wonderful Nine Streets area, set between some of the city’s finest 17th Century canals. It’s the browser’s delight, shop after fabulous one-of-a-kind shop, many with exquisite window displays. This is serendipity shopping at its finest. We sifted through Otumm watches, Uchino towels in unbleached cotton yarn dyed with chamomile and rosehip,  Alfons de Letter’s enamelled house numbers, Reypenaer cheeses and Dominio mid C20th Italian furniture. They’ve seen the future, so you can buy many things online.  www.theninestreets.com3Art with soul
Two of the most revered artists in history, Rembrandt and van Gogh, have their “home” galleries in Amsterdam. Both places are being renovated, but the artists’ principal works are still on show, and in a way that doesn’t wear you out. The Night Watch and other Rembrandt works, alongside Vermeer’s The Milkmaid  and other masterpieces of the Rijksmuseum are in the museum’s Philips Wing during major refurbishment of the main building, which reopens in the spring of 2013. Rembrandt’s House, where the artist lived between 1639 and 1658, has been well restored. I like the studio at the top where you can experience the actual light in which Rembrandt worked. 75 paintings by Van Gogh – including Sunflowers, The Bedroom and Almond blossom – hang temporarily at the Hermitage Museum. The Van Gogh Museum reopens in April (2013). The I amsterdam City Card (transport and museums) – € 40 for 24 hours.4Anne Frank House.Our visit to the Anne Frank House was a profound and humbling experience. It reminds us of the worst of human nature, of the petty evil of the people who betrayed the eight who hid in tiny quarters for two years from the Nazi occupiers. Yet it also speaks of the triumph of the human spirit, and the indomitable good cheer of this ordinary, yet extraordinary teenager, with the same ambition and dreams of any young person today, and the inspiration so many people draw from her. The city has served posterity well with the sensitive job it did in restoring the house. The emotional forcefield in the Secret Annex, where Anne found her escape and her balm in her diary, is intense. Liable to be very busy. www.annefrank.org5Top brasseries. There are many city centre refueling points serving the city’s famous staples, chips and mayonnaise and pancakes. And what a choice of distinctive, independent cafes. We had a wonderful lunch of homemade soup and Dutch apple pie in Latei, just off the Nieuwmarkt. (NB. Look for Koffiehuis . Anything called “Coffeeshop” comes with the pungent aroma of marijuana.) Among standard brasserie-type restaurants in good old high-ceilinged, canal-side buildings, with enthusiastic locals all around, I’d recommend the Van Puffelen, on Prinsengracht www.restaurantvanpuffelen.com/en. Another place with a straightforward brasserie menu, but doing it well, is Lab111, in a former hospital operating theatre www.lab111.nl. The city’s friendly waiters and waitresses, almost without exception, speak perfect English.6.Design of the timesThere’s no reception desk at the new (November, 2012), canalside Andaz hotel on C17th canal Prinsengracht. Staff check you in with an iPad, as you lounge with a drink in the lobby. Then you ride up to your room in a glass-sided lift, alongside a four floor high mural depicting the City’s rich maritime and trading history, tinged in gold and Delft blue. The story of Amsterdam’s Golden Age continues into the bedrooms, in the illustrations, the personally chosen books and the wallpaper in the bathroom. Every last detail in this former city library, stylishly transformed into one of the best boutique hotels in town, was the work of star Dutch designer Marcel Wanders. Check his creativity for yourself in his personalized range in your local M&S. Video art plays on HD TVs down every corridor. Free non-alcoholic drinks and snacks from the mini bar are a sensible touch. www.amsterdam.prinsengracht.andaz.comThe writer travelled by train, Eurostar from London to Brussels, then high-speed Thalys train to Amsterdam. www.raileurope.co.uk/.For more information, go to http://www.iamsterdam.com/