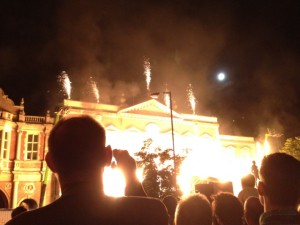 Market Square, Aylesbury, lit up by fireworks during the Paralympic Flame celebration

The case for choosing Stoke Mandeville in Aylesbury as the place to light the Paralympic flame every four years.

What do the following locations have to do with the Paralympic tradition? Parliament House, Canberra. The Hephaestus Temple in Athens. And the Temple of Heaven, Beijing.

All of them suitably solemn and dignified locations, I’m sure, but none of them particularly relevant to the Paralympics, unless it’s, tenuously, that temple in Athens – Hephaestus was the Greek god of fire and manufacturing, and had a disability.

If the flame for the Olympics can be kindled every time at the site of the ancient games in Greece, then carried by air to the host city, why can’t we do exactly the same with the Paralympic flame, lighting it in Stoke Mandeville?

This year four separate flames were kindled on the top of the tallest points in England, Wales, Scotland and Northern Ireland, which was entirely right for 2012. And appropriately the main ceremony to unify the flame took place in Stoke Mandeville, In Aylesbury, Bucks. It was carried the mile or so to Market Square in the centre of the town, and then sent on through a relay of torchbearers to the Olympic Stadium.

Many people from the community, and beyond, came together to put on a very successful night of celebrations, and the council, AVDC, deserves praise for its part in organizing the event.

I was fortunate enough to be present in a packed Market Square in the town that night. While we were waiting for the flames to arrive in Market Square, two people in our group  wondered why the flame shouldn’t be lit at Stoke Mandeville for every Paralympics. @MaryMaryb89  has already begun a twitter campaign to try to build support for the idea.

It’s perfectly possible that if Ludwig Guttmann had not had the vision and drive to launch the original, and extremely modest, games at Stoke Mandeville Hospital, where he was director of the UK’s first specialist unit for treating spinal injuries, then someone else might have done it in a hospital in Canada or the USA or Australia, and the glorious world wide competition would have happened anyway, in much the form that we see it today.

It’s equally possible that events would have followed a different course, and games for the disabled might always had have an inferior status, perhaps staged between the Olympic Games cycle, and with much less impact. We don’t know. What we do know is that Guttmann’s original idea has become today the second biggest sporting event in the world, with the potential to change attitudes towards disabled people everywhere.

That idea was born in Aylesbury, and the town has every right to guard and promote the legacy.

That wonderful Paralympic Olympic Flame celebration was a one off, and we shouldn’t seek to steal the thunder of host cities and nations in subsequent games by doing the same again. Host cities have won the right to proudly parade the flames for both Olympics and Paralympics throughout their own lands. And nobody would seek to tell them where they should do that.

It may not happen in time for Rio, where plans are well under way for the 2016 games. But it certainly should be considered for the 2020 games, when the venue is announced in 2013.

Now surely is the time to make a case for the Paralympics’ spiritual, and actual, home to be the place where the flame is kindled. Then, once that essential link with the birthplace of the movement is made, it should be maintained for as long as the Paralympic games are held.