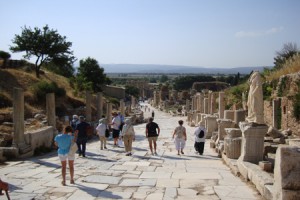 Sensible tourists hang on to their wallets at Ephesus

“Never give a sucker an even break.” That’s the rule they work to at the entrance gate to Ephesus in Turkey, and why should they make an exception for me?

WC Fields was simply expressing a far older truth in the musical Poppy in 1923.  I’m sure purses were regularly lifted in Roman times here, but I’m not sure if togas had pockets. Whatever. It happened to me, regular and far-ranging “traveller of some experience” who should have known better. They must’ve sized me up as a true innocent abroad.

I’m well past the embarrassment stage, and I’m telling the story for its instructive content, to explain expensive unintended consequences, and recount a heartening conclusion.

I was robbed on a Saturday morning in August last year.  The Graeco-Roman city Ephesus is the second busiest attraction in Turkey, with a huge surge of visitors in the summer months. I was visiting, on one of the busiest days of all, as a guest of the local tourist board, in the company of one of their guides.

Until I reached the entrance gates, I had employed standard protection methods, essentially securing my wallet in the inside pocket of my shoulder bag, and then wearing it facing inwards.

My guide approached the ticket window, explained I was a journalist with a pre-booked ticket for collection, and then turned to me to say the ticket man wanted identification. Reflecting on this later, this struck me as odd. A ticket had been set aside for a visiting journalist. That had to be me, didn’t it? Why would I turn up as an impostor and masquerade as some other visiting journalist?

That simple procedure, taking my wallet out of my bag, extracting my driving licence and handing it over, was all it needed. The pickpocket, probably one of a number hanging about in the throng, had had a sight of my wallet. I have no reason to doubt that the ticket office staff at Ephesus operate to the highest level of probity, but isn’t that a very old trick, where you are made to take something out of your wallet so a thief now knows where you keep it?

Here comes the silly bit. I put the wallet, without thinking too hard, into the pocket of my shorts. I remember being jostled from behind by some tourists. Then I was inside.

When I felt for the wallet, five or 10 minutes later, it had gone. More fool me, you may say, for not putting it back in my bag. I think if I had been buying a ticket myself I would have done just that. But because I’ve been asked to do something I haven’t been expecting, and quite unnecessarily, I think unconsciously I put it somewhere convenient, in case I was asked to show identification again.

I haven’t been a total dunce. I left my cash, most of it, in a safe back at the hotel. My wallet contained about £4. My guide did all the helpful things, contacting the police, and asking the gate if anything at been handed in, but to no avail.  Time to cancel the credit cards. That would be an expensive mobile phone call to the UK. The card company, Sentinel, were very correct and professional, but satisfying them that it was indeed me calling, and cancelling even a small number of cards and my driving licence took time.

All done, I thought. Then it’s Sentinel calling me back. One of the cards isn’t recognized. Could I confirm we had registered it? I now have to call my wife to check that missing card – and to make sure I wasn’t cancelling something that she would need on the trip she was taking. Another expensive call.

Sentinel are still checking that mystery card, and even them calling me is an expense on my phone. It turns out that this was a replacement HSBC card, issued by some outsourced company on behalf of the bank, so although it said HSBC on the card, it wasn’t. You don’t need to understand – I still don’t. Just add on another £15 to my phone bill talking about this.

I eventually get through for a second session with Sentinel, with another person, going through the whole process again, except it is about 50% longer than the first time. Eventually, after about 30 minutes on the phone, I’m all done. Later I found the total cost of all that is about £80. If it happens to you, find yourself a cafe offering free Wi-Fi and do it via Skype.

I managed to survive the next five days with the cash I had, staying in pre-booked accommodation. If I hadn’t changed twice as much money as I planned, sweet-talked into that by the lady at the change desk at Heathrow, I would have been in some trouble, probably falling back on that familiar method from student days of having money wired to me. (Do they still do that?)

There is a sequel, and it’s an entirely positive one.  A few days after I returned home, I received this email from Dr Sabine Ladstätter,  director of the Österreichisches Archäologisches Institut, working on long-term excavations at Ephesus:

I am the excavation director of the Ephesus-excavation (www.oeai.at) and I would like to inform you, that colleagues have found your wallet today in Ephesus. In the wallet no money, but your driving licence, two credit cards and a railcard.

It is quite obvious that you got robbed, because the wallet was found in one of the heating cellars of the Varius baths and I cannot believe that you went there (it is far from the touristic path)!

We are not sure, whether the police would have contacted you, so I decided to send a quick mail! Shall we send the wallet to your postal address (which is on your driving licence)?”

My wallet arrived a few days later, in a padded envelope. Since then it is only made furtive appearances at tourist honeypots. As a footnote it turns out, not that you need TV exposure to make your actions any more laudable, that Dr Ladstätter had been the helpful person at Ephesus  in the Channel 4 programme “Rome wasn’t built in a day”.

“Wonderful that you finally got your wallet back!” she replied. “Yes, your wife is definitely right, it was me on television with [those] really impressive British workers!”