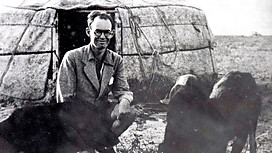 The small town of Barry on the South Wales coast, population 47,863, has produced a statistically unlikely  number of famous names.

In the arts and media the names of two men born just three years apart stand out.  One was Roger Livesey, who played the title role in one of the most revered of all British films, “The Life and Death of Colonel Blimp”.

Journalist Gareth Jones  was the other, murdered 79 years ago today, on 12th August 1935, one day short of his 30th birthday. In the 1930s he secured a series of remarkable scoops which included disclosing Stalin’s state-sponsored famine in the Ukraine, and being one of the first foreign correspondents to join Hitler on the campaign trail, in 1933. It’s the subject of my monograph, So wise, so young – Gareth Jones, Journalist, available free here

Jones, a real life adventurer journalist, demonstrated similar virtues in his own career, with painstaking on the ground research. His own safety was under very clear threat, as he asked the difficult questions on behalf of a world drifting towards war. He paid the ultimate price for his diligent reporting. This prolific and adventurous journalist was murdered one day short of his 30th birthday by bandits in China, although even at the time it was suggested the orders came from interests offended by his writing. Jones’s ultimate misfortune may have been to stray too deeply into the murky world of international power politics.

Outside his native Wales, the superficially unremarkable, non-conformist linguist with pebble spectacles, a perfectly buttoned up overcoat and trilby – in an age when foreign correspondents were self publicist, drink sodden bar-flies – was soon forgotten. (Intriguingly, however, George Orwell may have given him an unlikely enduring celebrity by taking his name for the character Mr Jones in Animal Farm.) He lost his life in 1935, when the world, sliding towards another great conflict, had no time to spare for solitary victims such as him, the small, brave people on the edge of the action.

His mentor, former prime minister David Lloyd George, pressed for an enquiry, but even then was it being closed down by people who had the truth? Lloyd George suggested Jones died because he knew too much.

Jones is chiefly, and rightly, remembered for his enormously important reporting in exposing the man-made famine in Ukraine, in a series of articles in 1933. But the pivotal scene in a hypothetical film would surely be Jones as the scoop gathering, adventurer journalist, aboard Hitler’s new aeroplane, on the campaign trail in Germany. In his article, for the Western Mail, he makes this supreme understatement: “If this plane were to crash, the history of the world would be different.”

There were to be no awards in his lifetime for Jones. History washed over countless brief lives in that decade, and removed all trace of many of them. But my own father remembered Gareth Jones, and gave me the name of this intrepid seeker after truth. From my early childhood one piece of qualifying information had lodged in my mind – “Welshman killed by bandits in China.”