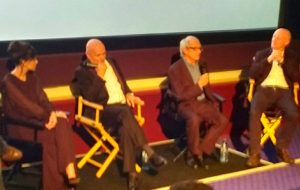 l-r Hayley Squires, Dave Johns, Ken Loach and scriptwriter Paul Laverty at a Q&A after a showing of I, Daniel Blake at Vue, Regent St, London

I, Daniel Blake won the best British film category at the Baftas (February 13, 2017).  Ken Loach had returned from retirement to record one of the biggest successes of his career.

In The Guardian, Peter Bradshaw wrote: “… it has something which is lacking in so many British social-realist film, or films of all kinds. I, Daniel Blake has passion. It is enraged about injustice in the real world and, in Churchill’s words, sees no need to be impartial between the firemen and the fire. It is a movie which repeatedly hits the C major chord of unashamed idealism and standing up for the benefit claimant and the unemployed.”

This is my review.

The closest that even reasonably comfortably-off people come to poverty is at that discreet little collection point for food banks, near the exit to the supermarket.

People begging in the street may not at all be the same thing as this quiet, powerless, and invisible  poor. They often have other issues beyond straightforward poverty, linked to drugs or alcohol or even mental health.

So the paths of most of us, untroubled by real, pressing financial needs, rarely cross those casualties of the welfare system whose money problems are so severe that they might go days without a real meal, or send their children to school in shoes stuck together with glue. We don’t see them, so British director Ken Loach has to take us to them.

Loach has been making films, loaded with humanity and concern, since the 1960s. He brings us the victims of the “system” in our rich nation, in which decent people who are not feckless or lazy, cannot find some way to rise out of the poverty that seems to be an unchanging feature of our society.

He did it with Cathy Come Home in 1966 and, 50 years on, he is still doing it, with equal force, if less of the raw emotional punch of that prime-time BBC TV drama, in I, Daniel Blake.

In Cathy Come Home, the villain was the housing system. In Daniel Blake, it is the benefit system, in the form of the grindingly rule-obsessed Department of Work and Pensions (DWP).

But this film is not grey and analytical, in the sense of a well-meaning documentary. It is a raw, if restrained, human drama, which commands the support of anyone with an ounce of compassion for its main characters.

They are Dan (Dave Johns) and Katie (Hayley Squires). In the case of Katie, the state simply can’t provide her with sufficient support to adequately feed and clothe her two small children.

Things would be even worse if she hadn’t been befriended by Dan, after a confrontation in the local DWP offices. He is heading in the same direction, off work because of a heart attack and just entering the labyrinthine ways of the benefit system.

They have a touching and entirely platonic relationship, in which Dan supports the family, newly arrived from London in Newcastle. While the ever-hungrier Katie hunts around for scraps of work, Dan does his best to stick to the ever-more baffling rules, where he has to pound the streets seeking a job even when he cannot take it, while facing sanctions, in the withholding of benefit, if he doesn’t do so and keep a detailed record of his progress. (How is he supposed to prove he’s applied for jobs? He’s told to take photographs on his mobile phone.) Guiding him on, with more than a note of homage to Kafka is the hope of his “appeal”.

There are several points in the film as this plot unfolds where I began to assume that scriptwriter Paul Laverty had, understandably, exaggerated certain details in the way the DWP works, the conduct of its staff, and the increasingly crazily-prescriptive rules they apply, in the sake of drama. In a short question and answer session after the film with Paul and Ken Loach himself, we are assured that what could easily be construed as heartless bullying of innocent people does indeed happen, and the information that the plot is founded on came from former DWP staff members.

People might argue that government departments run such a severe, censorious system in the interest of honest people, because benefit recipients include that dreaded category “scroungers”, who just want to appropriate honestly-earned tax revenue from us, the hard-working majority. (A majority which includes a good number who will pay untraceable cash to tradesmen, who then avoid paying those very taxes.)

There are decent people in the welfare, and support, system, from the staff of the food bank, where Hayley Squires did her research, on an empty stomach, for three days before playing her memorable scene, to some good folk in the DWP office prepared to help rather than obstruct her.

This is a very British film, made by Loach, that master of the story of, in his own words “ordinary people and their dilemmas”. It is interesting to see that backing for the film also comes from France (where it opens in six times as many cinemas on October 21st as in the UK) and Belgium, an indication that there is a wider message here, about people being let down by the state, beyond the forensic criticism of the Westminster government’s system.

Most most films in the mainstream cinema are made to entertain us, and that’s what this film technically does. There is comedy – a regular device in the telling of depressing stories –  and a lot of good supporting acting from people who may or may not be professionals. The two children are, I assume, just schoolchildren. Briana Shann, as the daughter Daisy, is a beautifully calming and supportive influence as lives begin to crash. The two main characters are outstanding – all the more so because neither over-plays their part as their lives deteriorate.

It is an uncomfortable, although very rewarding film. Even refugees – and their plight is very desperate – are in a predicament that elevates them to the category of highly visual news. We see them in their boats and in their camps, suffering and resolute and talking to politicians. We never see the Daniel Blakes or Katies.

Perhaps we pass them on the street in Newcastle or Gateshead, or Amersham or Weybridge, but we will never know if they are on their first visit to the food bank or just back from a Kafka-esque confrontation at the local DWP office.

They are invisible, and even if they weren’t, would we, brainwashed by a government and Press (the usual honourable exceptions) determined to brand them as work-shy and indolent, would we see them anyway? It will be to Ken Loach’s everlasting credit that he turned his cameras on them.

I, Daniel Blake, distributed by Entertainment One Films