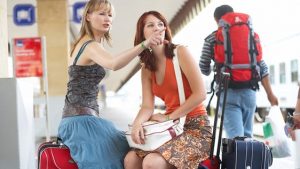 LuggageHero is a brilliantly simple, and disruptive, travel idea. And easily the best I have seen, so far, this year (2018).

It’s something I’ve done many times. Turned up in a city or town and I can’t check into the hotel. Nowhere to leave my bags. Or I’m leaving on another train or plane in a few hours time. I remember weary days lugging around a suitcase (and not so long ago they didn’t even have wheels) or a heavy backpack.

The only place you can be sure to find left luggage is in the main railway station, and that may be a bit of a walk when you plan to explore the old town half a mile away. You may have to queue, and it can be inflexible. (There was a time in the UK when, during the IRA bombing campaign, left luggage was suspended altogether at railway stations.) It used to be easier to just trail around with your bags for a few hours and put up with it.

A new concept, LuggageHero, promises to end that frustration. It offers, in effect, pop-up left luggage based in shops and cafes, and frees you up as an unencumbered visitor. It is, once again, a solution founded on the smart phone.

LuggageHero began in Copenhagen in July 2016, and already deals with 45 shops in the city. It now plans to expand, starting with London in March (2017), followed by other European cities.

So let’s see what founder Jannik Lawaetz is offering in the Danish capital. On your way to the city you have already looked up shops and cafes participating in the scheme and booked your suitcase in, for an hour (€1, or €2, depending on the size of your luggage. plus an initial €2 start up fee) or longer. You won’t pay more than €10 for a day. It is a flexible scheme where you only pay for the hours you use storing your baggage, not for the hours you originally book.

You pay on your phone by credit card, so there is no need to worry, having just arrived, that you don’t have any local currency. The bag or case is sealed with a special tag as an assurance that it is unopened and has not been tampered with. An identification number is sent to the customer’s phone.

It is free for the (receiving) shops or cafes to register. They are then certified and approved by a local LuggageHero representative. LuggageHero takes a percentage of the sum customers pay to leave luggage on the premises.

The benefit to the retailer is that, once inside the shop, you might want to browse and buy something, or order a coffee and pastry. Then, off you head, light on your feet, for some serious visiting. You can do a lot in an hour or two.

The company plans to open the service in London in March (2017). Its press release – it was in Danish but I translated it with Google Translate – noted: “Local shops have both the space and the inclination to take tourists and their luggage.”

LuggageHero aims to become of the largest luggage storage service in in the capital. “After London we will expand the concept to several European cities”,  said a spokesman in the press release.

There’s an element of trust here. Left luggage in railway stations can x-ray your suitcase. But the risk, surely, of a terrorist, posing as a customer, targeting some little craft shop is small.

This looks like me like an idea whose time has well and truly arrived. Jannik Lawaetz deserves to hang onto it and make some money out of it. And if he can’t, others certainly will.