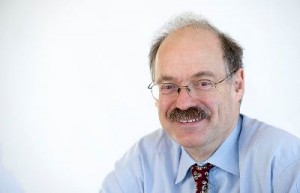 An interesting, possibly landmark interview on the Breakfast programme on BBC 5 Live, on Wednesday, January 29th, 2014. (1 hour 42.08 minutes into the broadcast). Presenter Nicky Campbell talks to UK Government Chief Scientific Adviser, Sir Mark Walport about a series of talks he is giving around the country on climate change.

There was nobody else involved to “give the other side”. Campbell could be forgiven for introducing some devil’s advocacy into his questioning to provide that BBC balance, but he did no moe than quote comments made by that well-known advocate for reason in debate, the leader of UKIP.

It was short but serious, a calm summing up of where the evidence stands on this very important issue. Might this mark the time when the BBC accepted that climate change and its human causes was no longer an issue to be debated ad nauseam like the economy or what to do about the NHS. But a serious undeniable fact to be addressed urgently.

This is the interview in full, transcribed by me.

[Nicky Campbell] The government’s chief scientific advisor Sir Mark Walport said helping to tackle climate change was one of his key priorities when he took on the role last year.

[Rachel Burden] Now, in an unusual move, he is taking to the road and is touring Britain’s science museums with his talk “The Planet in our Hands”, in an effort to drum up public awareness.

[Nicky Campbell] Last night he was at the Museum of Science and Industry in Manchester. We can talk to Sir Mark now.

Good morning. There is massive scientific consensus on this. How big is it? How many scientists are disputing that [climate change] is man-made?

[Sir Mark Walport] I think that overall it is a small percentage, but the important thing is that the expert community of scientists who really know and have studied climate have come to a very strong consensus. There is an extremely good consensus process through the Intergovernmental Panel on Climate Change. My job is to advise government on the science, and we need the best advice in order that we can have clarity about the policy debate. What sometimes happens is that the policy debate gets confused with the uncertainty about the science.

SMW – absolutely. I mean the consensus is not only that there is climate change but that there is an unequivocal human contribution to it.

NC When you get senior politicians, such as the leader of UKIP, for example – he said this to the European Parliament:  We may have made one of the biggest, stupidest collective mistakes in history by getting so worried about global warming. There is ample evidence that climate change is happening [said the UKIP leader], but the world is cooling not warming.

SMW – Frankly, that’s just wrong. My job is to advise the government and I’ve had the opportunity to talk to the cabinet about climate and I’m clear that the government is very clear about the scientific evidence that is behind climate change.

NC. You must be dismayed when senior politicians with considerable support say such things?

SMW – well, I think part of my job is to get out there and put across the clarity about the science, and I think what tends to happen is that people who don’t want to have a difficult policy debate, which we should all participate in about how we should respond, think that the easiest way to deal with it is by denying or rubbishing the science. I don’t think that’s a sensible thing to do. I think we have to start taking the best scientific evidence, recognising of course that there are uncertainties about the rate of progress in the future. But the direction of travel is very clear.

And then I think we need to have to have a grown-up debate about the policy itself, and one of the reasons I’m out here talking about the science is to try to get that clarity so we can have a more general policy debate. But ultimately of course it’s for our elected politicians to decide what we are going to do about it, in terms of not only trying to alter our energy demands but also our sources of supply.

NC.  We can’t stem the tide, as it were. There is going to be considerable change to this earth in the next 50 years. Is it not the fact that we can perhaps limit the consequences but only marginally?

NC – Did it cause extreme weather conditions in this country? Was it a contributory factor to the floods?

Sir Mark Walport, thank you very much indeed for talking to 5 Live Breakfast.

Sir Mark Walport: The Planet in Our Hands – Responding to Climate Change

The event will be chaired by Professor Alice Roberts, who will be in discussion with Sir Mark Walport during the public Q&A session following the talk.