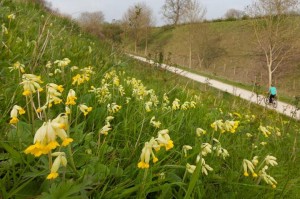 This is a piece I wrote earlier. So I apologise if one or two details are out of date. All you need to know to plan a visit is on the official website,

Emphatically capitalized chalk legends on a line of blackboards (well green boards) at the Cheeseboard Delicatessen hype the product range. Now, you would never stand in a town centre being entertained by a supermarket window.

On the evidence of its shop fronts alone, Ashbourne (“Gateway to the Derbyshire Dales”) espouses the world and its own immediate hinterland with equal fervour. Down at the Gingerbread Shop, they tempt you in with an exotic mountain of Californian tomato bread, ciabatta and honey and sunflower loaf. A butcher offers local venison. (Blackboards again, they catch the eye every time, appealing to our inner schoolchild?) The bookshop is running a “Learn French” promotion.

Then there’s the famous Blackamoor’s head above the main street, eyeballing passers-through as they sweep on into the Dales. The wooden sign for the Green Man spanning St John’s Street bears in the middle a startling, disembodied, two-faced head with freshly painted ruby red lips, white eyes and gold, green and red turban, on a black background: one side is smiling, for your arrival; the other baleful, for your departure.

I had too often been that passer-through, late at night on the way to the dales. This time I decided to stop and stay awhile. I pass along the crenellated outine of Church Street, where the fronts of no two adjoining houses keep step, to St Oswald’s Church – the tip of its 200 feet spire still fails to overtop the hills that encircle Ashbourne. In the park, horse chestnut leaves lie like beaten gold looted from an Saxon King’s tomb.

This is the Church of England, not a tourist trap, so there’s not a word about the spire being, in George Eliot’s opinion, the “handsomest” in England. But if they miss a literary marketing trick, they pull the conservationists by promoting the church grounds as ancient meadowland.

To Smith’s Tavern for lunch (Chicken Bombshell and half a pint of Marston’s Pedigree), although I could’ve chosen any one of the six pubs huddled around the steeply sloping marketplace and the adjoining Victoria Square – the centre of Ashbourne is no bigger than the typical Derbyshire stonewalled field. Travellers to the Dales did well to hold here before venturing into the high, cold country just north. The old coaching hostelries still radiate that indefinable “come on in” appeal.

Part of the experience of visiting Ashbourne is leaving it. Once it was linked to Buxton by a railway that never made the shareholders rich. When Beeching’s axe fell, the council snatched it up with fine forethought and turned it into the 13 mile Tissington Trail, heading north into the Peak District National Park. It lets you experience the cycling of  Edwardian times, but with a better surface. The trains are gone, but the basic formations remain: there goes the streamlined express, a sextet of racing bikes in a immaculate phalanx, spoke-perfect, probably doing the Dales in a day. Then a smutty old freight train, a mountain biker who has evidently been branch-lining through the fields, his back mud-caked from saddle to helmet. And a prim little push-and-pull – mother and two young daughters.

After three miles, I head back into the dimming autumn afternoon. An oak in flame-red leaf is the last thing to decline into the gloom. The sound of the bells of St Oswald, almost a physical force, slithers around the valley folds. Time for tea at the Gingerbread Shop. On my way back to the car I spot another blackboard: “Proper Butter,” its teases.”Cut from the block. Wow, it’s the real thing. To heck with cholesterol.”

Photo Credit – Pedal Peak District is run by the Peak District National Park Authority to help you discover the benefits of cycling. · lovetoride.net/peakdistrict