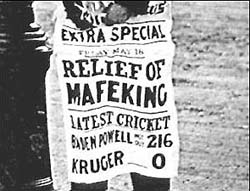 Can't it wait until you get home?

You are on holiday in a remote Nepalese village when you spot an English-language newspaper with a headline something along the lines of: “London in flames. Rioters trash capital.”

What do you do? Perpetuate that rare state of bliss, where you are so far from home, so cut free from the working world, and walk on by? No, you probably buy the paper.

You’re still, though, doing quite an unusual thing, probably from your own point of view and, if a new survey is to be believed, according to the experience of most British travelling abroad on holiday. The sample polled by HolidayExtras.com  the UK’s largest holiday add-ons provider,  showed that 48% of them never buy a newspaper when on holiday because they want to forget about everyday life back home. (I suppose it’s rather more difficult to ignore what’s going on when you are  holidaying in Britain.)

I certainly have a “look away now” policy when  we walk past a news stand  with British newspapers in foreign resorts. And usually we are not missing anything. This is after all the “silly season”. In normal circumstances you couldn’t pay me to read whatever the  popular  press choose to put on  the front page at this time of year.

This year, of course the news agenda has been turned upside down,  with compelling (and appalling) story following compelling story – News International, Obama and the Tea Party, the Norway massacre, the stock market  collapse and now the city riots.

Very unusually there is  more than  enough to tempt us to break the holiday habit of a lifetime –  even then only 30%  say they will only buy a newspaper if there is a major story that they feel they should read.

Only 13% admitted to purchasing their usual paper as a home comfort while away – I assume that’s when normal “Silly Season”  rules apply. And just 9% of HolidayExtras.com customers said they went online for news when away from home.

Our family have done it it just once. Shopping in the nearest town  to our blissful Norwegian fjord-side retreat in the 90s, my wife noticed a “Yeltsin Deposed” headline in the  Daily  Telegraph, referring to a coup against the Russian leader . She bought the paper and we  read it avidly, not realising that, because the paper was already a day old, the coup had been reversed and Yeltsin had seized back power.

The only comparable event which  might also  have caused us to buy a paper was the death of Princess Diana, but we found that out, in a remote village in Turkey, from a family member phoning us up. And people arriving at our accommodation the next night, anyway, brought half the newsagents’ stand with them.

I suppose we work on the principle that if something really serious was happening  we would find out soon enough. That what people tell me who were away during 9/11. There is a danger, I suppose,  of  partly informed people talking a catastrophe into Armageddon. In the days afterwards one family member rang home to say she heard that nuclear war  was  brewing. Today few people would be too far from an Internet cafe, or a computer in the hotel that would allow them to check the BBC to see what was really going on.

All of which persuades me that the survey has probably got it right.   It seems we ignore the Internet, too,  while on holiday –  90% of  the company’s customers avoid reading online news on holiday. People really do want to escape, and even maintain a state of  blissful  ignorance.  After all,  what’s the point of worrying,  unless the news directly  affects  them,  if they live  in those parts of London  where there’s been been  rioting, for example?

Supposing you are away on an isolated island during the Cuban missile crisis in 1962. Knowing what was happening hour by hour  would certainly have ruined your holiday. But imagine arriving home the day after it was resolved having  been spared all that agony.

These days there are advantages in not hearing the news. A few years ago I managed to set my TV recorder to save the decisive Ashes test match, and somehow made it back without hearing the score so I could watch the recordings, day by day, in genuine ignorance.

Holidays are special times, and you are generally in a place you want to remember for all the best reasons. What can you possibly gain by fretting how much the stock market is going to fall today,  or if Arsenal are  going to make that important signing before the transfer deadline closes? Carry on enjoying your holiday.