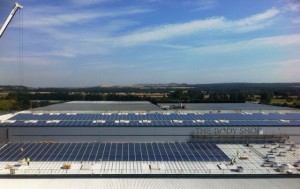 I’m writing this on a grey last Friday in July morning, but I have some defiantly sunny news to impart.

The  Body  Shop has just completed, in 9 weeks, Britain’s largest  self-funded (paid for by the company itself) rooftop solar energy system at its head office at Littlehampton in Sussex.

3,840 solar panels covering an area equivalent to 24 tennis courts will provide enough energy (approx.  900,000 kWh of electricity a year ) to meet a quarter of the office’s needs. That’s equivalent to the power used by 250 houses.

It cost to £2.8million, and the investment will be recouped in 7 to 8 years.

Another renewable energy success, then? Yes, but it marks a setback at the same time.  Today is significant, because it’s the last day that big solar schemes, generating more than 250kWh., qualify for favorable deals on the energy they produce under the UK government’s Feed In Tariffs (FIT) scheme. Because the eco retailer beat the  July 31 deadline,  it will be paid 29.3p per kWh by the National Grid for the energy the panels produce.  An amended FIT starts on Monday, 1 August: thereafter the tariff will drop to 8.5p per KwH.

Businesses grumbled all year that the incentive to go ahead with solar schemes has been taken away,  but the government has been unmoved, arguing that  generous payments to  bigger commercial schemes took money from the pot meant for the domestic user.  (In my village, incidentally, I’m aware of only 2 householders  taking the incentive and fitting solar panels, out of more than 1000 houses, although  there could be more.)

That said, even a modest start is better than nothing. As the Body  Shop and other companies operate their systems, we will get to know in some detail   how much solar energy they  are actually producing, and  how  this varies with levels of sunlight throughout the year.  And this  information may inspire many more householders, who still have  a very attractive deal available, to go solar.   But what a pity the scheme had to be cut back.

Paul McGreevy, The Body Shop International Director of Values commented: “The Body Shop has always pioneered in environmental initiatives, and we are delighted to be able to continue our commitments to protecting the environment.

“We had already made a commitment to reduce CO2 emissions by 50% in our offices by 2015, and the Government FIT initiative has helped us to significantly invest in alternative energy generation. Whilst we understand the need to prevent commercial exploitation of the Feed In Tariffs, we are disappointed that large, self-funded scale installations like The Body Shop, entirely in keeping with the original intention of the initiative, have now reduced considerably in size, postponed or abandoned due to the increased investment.“