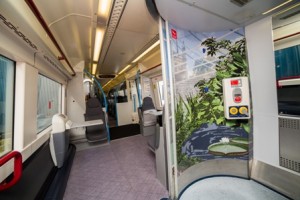 One year on (November 3rd 2016) since it opened, and 1 million people are said to have used Bicester Village station. That’s quite a figure. And there is more expansion to come, with the completion of the line to Oxford city centre on December 12 (2016).

There is a direct service from London’s Marylebone station, fast (49 minutes, one stop), to Oxford via Bicester Village, that incongruous commercial phenomenon, a chic and expensive designer shopping outlet in rural Oxfordshire.

In October (2015), for the first time in over a hundred years, trains ran from London by a new route to a major British city. The link from Marylebone to Oxford doesn’t exactly count as a new railway – it only involved the laying of 1km of track to join existing lines. But that short stretch is far more than symbolic. The assembled dignitaries at the opening ceremony on 26th October could briefly know how those ambitious and self-confident stovepipe-hatted railway builders of the 19th and early 20th century felt.

(So far trains only goes as far as Oxford Parkway, a new station to the north of the city. The connection to the main Oxford station will be complete in December, 2016.)

The new city-to-city connection, operated by Chiltern Railways (the picture shows one of the new train interiors), does the standard things expected of such projects. It will improve people’s travel and work options.

It will compete with the existing service to Oxford from Paddington Station. And it will do something those Victorian visionaries could never have imagined, provide a fast, clean alternative to driving on clogged and polluting roads.

However many of those boarding at London’s Marylebone station will not be so interested in Oxford. They will have another destination in mind, although it’s one which the railway building capitalists would have approved, even if it would have been beyond their comprehension. This is a railway to the shops, or more precisely to an international retail experience. (I have not yet travelled on the service, but train announcements are said to be in English, Arabic and Mandarin Chinese. Bicester Village is one of the most poular destinations in the UK for Chinese tourists.)

Bicester Village is designer shopping at its most exclusive and expensive outside central London. Indeed parent company Chic Outlet Shopping’s web site lists it, somewhat mischievously, under “London”. It is described as a “luxury outlet shopping experience” in “luxuriously appointed boutiques”, all single storey and old fashioned High Street shop-sized, on an open-air pedestrianised mall. Now it has its own railway station, appropriately (although some locals don’t think so) named Bicester Village.

The “village” is a remarkable and utterly incongruous commercial phenomenon, on the edge of the otherwise unexceptional old market town in rural Oxfordshire, close to the start of the Cotswolds. It takes far more retail money than any equivalent area in Britain outside a major city centre.

There is a startling statistic on the parent company’s web site. Bicester Village generates some of the highest sales figures of any shopping centre (both full price and outlet) in the world. It has enjoyed unbroken, consecutive years of double-digit growth since it opened in 1995. There were 6.3 million visits in 2014. So it definitely needs a station.

Chic Outlet Shopping promote it as one of a family of villages around the world, defined by their open-air settings, and top brands. There are tempting discounts on the very high prices at 130 top-name boutiques, such as Anya Hindmarch, Hugo Boss, Salvatore Ferragamo, Alexander McQueen, Anya Hindmarch, Burberry, Dior, Gucci, Prada, Smythson and Versace.

Bicester Village offers valet parking, chauffeur-driven cars from the West End, Heathrow and Birmingham airports and personal stylists – all features high-spending International customers recognise. But they won’t be impressed by the congestion. The car parks are regularly full on weekends, and the overspills parks are an irritating mini-bus shuttle away.

The new station should provide an attractive alternative. It is the second stop – the best time is 49 minutes – on a twice an hour fast service from Marylebone Station.

Some local people objected at its helpful – or nakedly commercial, depending on your viewpoint – name. The previous station on that site was Bicester Town. From my experience of the station, not too many of them appeared to use it. Besides the town has another station, Bicester North, on another spur of the line from Marylebone to Birmingham Moor Street. (The new 1 km section links that line with the existing route between Bicester and Oxford, which was completely rebuilt, with new track, signalling and bridges.)

Bicester was once a stop on the Varsity Line, Oxford to Cambridge. Bletchley Park was chosen as the code-breaking centre in the last war, because of its situation on that route, mid-way between the university cities. One of the most ill-judged of the cuts in the 1960s, the line is likely to be restored before too long.

Chiltern Railways’ marketing director Thomas Ableman believes the station’s name should encourage more visitors to travel “via sustainable means and reduce congestion within the town.” A poll of Bicester households by Wavelength Insight found 49% of residents favouring a name change, compared to 23% who wanted the old one kept.

The station’s name should be a useful marketing feature. Promote it well in the smart hotels of central London, and the line could attract significant business. And with such well-heeled shoppers aboard, what marketing opportunities. Superior coffee and pastries on the way up? And, the perfect end to the shopaholic’s day out – cream teas with champagne on the return trip.