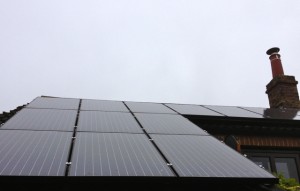 Five years ago this week, we installed 13 solar panels on our roof. The array, with a capacity of 2.47 kilowatt hours (kWh), cost us £7,862. Today I would have to pay less than half that.

Take the real example of the Guardian’s Patrick Barkham, writing in 2015. His 4kWh system of 16 panels cost £4,630 to supply and install.

The output from a 3 to 4 kW solar panel system should meet the energy needs of a family-sized home; a 2 to 3 kW array will typically power a smaller household.

Over the past five years we have generated 9854 kWh, at an annual average of 1970 kWh (uncannily close to the original estimate). A typical semi-detached home uses 3847 kWh a year, but that includes heating, water heating and cooking. In our house those last three needs are met by a gas fired Rayburn. So at quite a rough estimate we meet our electricity needs from our solar panels, with some to spare.

In addition to that, because we were early adopters, shortly after the feed-in tariff came into force, we receive the now very generous rate for a small photovoltaic installation of 43.3p per kWh for the total electricity generated, and for any energy exports made when we generate more than we use. The feed-in tariff was intended to stimulate the solar market, which it certainly did, although it can also be argued that by reducing the payments so dramatically the government then depressed that very same market before it was strong enough to continue without support.

Today, because that inducement is no longer there, far fewer people are fitting solar panels to the roof. The return from the now almost negligible feed in tariff is, well, almost negligible.

So there are only really two reasons for the householder to go solar. One is to look at it as an ethical investment, and do their bit to help the UK reduce its carbon emissions. The UK government was legally obliged to do this, under UK legislation, even before it signed up to the Paris climate agreement of 2015, which made this much more of an urgent international mission.

The other is to carry on saving money on energy bills – the average electricity bill for a medium-size house is £487 – albeit after something like 8 to 12 years, when the consumer will have paid off the original upfront investment. It is easy to understand why most people don’t see that as much of a deal.

However if panels were fitted to a new home and the costs incorporated into the selling price, with a likely saving as the roof would have to be built anyway, then they become more attractive. The first buyer might accept this small premium just as he or she might for double glazing or a conservatory. It then becomes a selling point – as in “this house comes with free electricity”.

How long before solar panels are routinely built into the roofs of new houses? As increasingly is the case, we turn to Elon Musk for a solution. In October 2016 he unveiled his solar roof tiles.

They are attractive – they look like glassy slates – with the solar energy generation capacity to power the entire home. Tesla’s Powerwall domestic battery would then store any excess solar power generated for later use. Musk didn’t give a cost, but says it will have a “lower cost than a traditional roof when combined with projected utility bill savings.”

What we need, of course, is a carbon tax that recognises the true environmental costs of generating fossil fuel electricity. Then the game is changed, and solar panels on your roof become a far more attractive possibility.