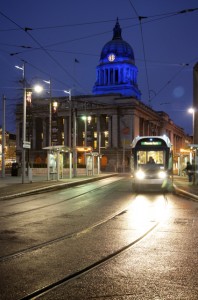 Nottingham Council House and Old Market Square in Nottingham at night, overlooked by the Council House, with trams running around the edge of the square.

Nottingham is the next stop in this big summer of sport. The Ashes cricket test match series, England against Australia, begins there on Wednesday, June 10, at the famous old ground by the River Trent.

I made a fresh visit to an old haunt and found a Nottingham offering so much more – besides cricket – than the memory of a surly sheriff and the twang of Robin Hood’s bow. The capital of the East Midlands is packed with interest for a day trip or longer visit.

This is my choice of things to do and see. It includes an awfully old Inn, some very European public transport, world class cinema-going and some of the best city centre shopping in Britain.

I think St Pancras station is the grandest and most distinguished rail terminal in Britain. It’s one of the best examples of Victorian architecture restored, after a period of sad indifference in which many fine old structures, including near neighbour Euston Station, were swept away and replaced with indifferent contemporary buildings. St Pancras has rightly become an exciting place of departure to romantic destinations all over Europe. But why go abroad? Walk on under that grand curving glass roof and you come to the domestic platforms, and a very quick train to the Midlands. I stepped aboard, found myself a comfy seat and sat back for the swift trip to Nottingham.

I was standing on Nottingham’s grand Market Square, in front of the imposing 1929 Council House, when I heard the sound of confident, Continental public transport. It was the bell of Nottingham’s very own tram. Launched in 2004, this bold, green investment is paying off as a visitor attraction, as well as useful car-reducing conveyance. This is one of only a handful of tram systems in Great Britain. Compare that with Europe where it is hard to find a large town or medium-size city without a tram system.

Nottingham’s tram starts at the railway station, threads through the city’s hilly centre, and past the little warren of pedestrianised shopping streets, then out to the suburbs as far as Hucknall, where the poet Byron is buried in Saint Mary Magdalene churchyard.
Buy the go anywhere ticket on the tram (good for buses too).
Pursuing the literary theme, why not visit nearby Eastwood where the writer DH Lawrence lived.

* The tram system is being extended. It will be more than doubled in size by the end of 2014, with 17.5km of new track and 28 new tram stops. Two new lines will link directly to Line One at Nottingham Station.

The door of the graceful old city centre property on Low Pavement, the perfect location for the next Jane Austen movie, stood wide open and welcoming. Then I realized Willoughby House, dating from 1735, and one of the best of Nottingham’s many handsome 17th and 18th century homes, was a shop.
Nottingham-based fashion designer Paul Smith turned this quintessentially English town house into his flagship outlet in 2005, and made an excellent job of it. It’s wonderfully restrained, with only a small outside sign to tell you it’s a store. The clothing range is set out tastefully on tables throughout the five-floor listed building. You can wander through the house inspecting the couture, while you admire the original plasterwork, paneling, fireplaces and chandeliers. It’s one of a number of individual, independent shops in central Nottingham.

Richard the Lionheart’s crusaders, staying at Nottingham Castle just up the hill, would call, it is said, at the Trip To Jerusalem hostelry just before they set off to try to free the Holy Land. You might say this tradition gives real meaning to the saying ‘one for the road.’ One of Britain’s oldest pubs, the Trip is believed to have opened in 1189, built, cramped and narrow, into the bottom of Castle Rock. I sat in one of the higgledy-piggledy rooms, under a gently ticking clock, and enjoyed the deep centuries-old slumber. Above me stood a line of photographs of random celebrity visitors such as actress Mai Wong. She was here quite recently, by the standards of this place, in 1933. They serve hearty pub food, fit for departing crusaders. The beer is good, Hardys & Hansons, even if it is now brewed in Suffolk by Greene King, the pub’s owners. http://www.triptojerusalem.com

My ceiling- to- roof bedroom window opened onto the hotel’s secret garden, just below the ramparts of Nottingham Castle, overlooking leafy avenues far below. Hart’s Hotel must be one of the quietest places in central Nottingham, an example of the city’s first-rate boutique hotels (www.Nottinghamcitybreaks.com). There’s a touch of California or southern Spain in the light, curving exterior of the architect-designed building. Genuine 21st Century Nottingham, it opened in 2002
Inside, lots of bright modern art, and trim furnishing. Rooms are simple, but with classy details such as goose down pillows and duvets, Egyptian cotton bed linen bedding, and a Bose sound system. There s a cosy bar, a one person gym, and staff who remember your name.
Hart’s Restaurant (20 yards away), is one of best in the city. They do a theatre package, with the nearby Nottingham Playhouse and Theatre Royal.

The tourist people booked me a table at the excellent World Service restaurant in Newdigate House, in a quiet little cobbled street backwater. The man who introduced celery to Britain lived here. Marshall de Tallard, defeated French commander at the Battle of Blenheim in 1704, and surely the most pampered prisoner of war we have ever put up, found the plant growing locally.
Celery didn’t feature on my visit, but the gourmet aristocrat would have approved of the graceful décor, the ceiling tapestries and vases and statuettes in little niches – ‘individually made items of furniture and unusual artifacts from the world’. There’s a comfy bar where I enjoyed the house cocktail – vanilla rum, Cointreau, lemon juice and sugar syrup – and chose from a menu of ‘modern British’ dishes. My Nottinghamshire pork fillet, crispy chorizo tortellini, smoked bacon, tomato and tarragon sauce was splendid. This place is further proof of how well you can eat out in British cities at well below London prices.

Independent cinemas are as important on the list of good things in urban life as old-fashioned bakers and real ale pubs. Nottingham’s four screen Broadway Cinema recently reached the very top ranking, alongside famous picture houses in Paris and Los Angeles, in a survey run by Total Film magazine, It chose the Broadway as one of ten in the world to provide a ‘unique cinematic experience’. The Broadway’s bragging rights come from their new fourth screen, which showcases new art house movies and independent films from round the world. Local fashion guru Paul Smith designed its 35 double ‘love seats’, in chocolate, multi-colour stripe fabric, and put together a wall of photographs of the stars. If those snuggly seats weren’t enough, the cinema supports its ‘linger longer’ ethos with good beer, and free WiFi, in the bar.
www.broadway.org.

This is the official website on the city, with lots of help on what to do, where to stay and where to eat and drink. http://www.experiencenottinghamshire.com/nottingham

Out of town extras.

Hodsock Priory provides English willow for cricket bats all over the world. The estate has been growing around 300 English cricket bat willows since the 1990s.

The trees, which grow best along the streams on the estate, are cut down when they mature – usually after 15 years. Each trunk contains wood for around 30 bats.  So, felling around 40 trees a year, Hodsock contributes 1,200 bats a year. They are suitable for players from school level up to Test Match standard.

New willow saplings are replanted as soon as the trees are felled and cleared. It’s a totally renewable industry.

The trunks are then send to JS Wright & Sons’ factory at Chelmsford, Essex, where they are cut and conditioned into blades.. Wrights sell them to a number of manufacturers, including Notts based Gunn and Moore and Warsops, who make current England captain Alistair Cook’s bats.

Wrights produce 450,000 blades a year. The finished bats end up all over the world, and the biggest market is India and Pakistan. It continues to grow.

The company says it’s impossible to tell how many bats made from Hodsock willow will be playing in the Ashes series in 2013, “but isn’t it wonderful to think they could be in both dressing rooms?”

Papplewick Pumping Station is the finest working Victorian water pumping station in Britain. The site has recently undergone extensive restoration, and is a spectacular example of Victorian craftsmanship. Original features include an ornate Engine House, ornamental cooling pond and a Boiler House with six Lancashire Boilers, all set in formal landscaped grounds.

This is an outstanding fusion of Victorian engineering and artistic design, with splendid stained glass windows, elaborately decorated columns and polished mahogany and brass work. Designed as a statement of Victorian flare and pride, it is hard to believe today that the site was never intended to be seen by the general public.

This is Experience Nottinghamshire’ website, http://www.experiencenottinghamshire.com/things-to-do, with lots of suggestions of things to do.