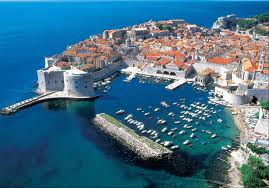 I saw my first prosthetic foot in Split in Croatia. It was towards the end of the 1990s, and the shocking, merciless Balkans war was only recently over.

Young men in shorts, not attempting to hide their disability, leaned their crutches against open air cafe tables, and tried to return to normal.

There was no point in trying to airbrush this terrible time out of its history as Croatia greeted the returning tourists, particularly as the signs were all about us. No brochure could get away with publishing a pre-1990s photograph of Dubrovnik, for example, pounded by Serbian and Montenegrin forces, who hit more than 560 of the 824 fine Gothic, Renaissance and Baroque buildings in the Old Town. Any more than Bosnia could hope nobody noticed an old view of  Stari Most in Mostar, which had stood for 427 years, until it was destroyed on 9 November 1993.

Optimism was all about us, however. Work was already underway to repair the Balkans’ shattered history, and it wasn’t long before Dubrovnik was carefully reconstructed. (Mostar bridge was rebuilt and reopened in  2004.) But Croatia had an even bigger ambition as it emerged from its dark valley of despair. Membership of the European Union, where surely no more war by neighbour on neighbour could ever happen.

The dream came true when Croatia joined the EU on 1 July, 2013. 15 years after the end of the dreadful conflict, the country can look confidently forward to an era of growth and recovery based largely around tourism.

Indeed, is there a single country out of the EU’s 28 members that sees it as such a vital part of its future? There are projections that this small nation of 4.4 m may gain a place among the top tourism countries in the world by 2020. Equally intriguingly, is there a nation blessed with such an opportunity to get its touristic development right, if we are to cite overdeveloped parts of the Spanish and French coast as examples of how to get it wrong? (This is an article I wrote on the country in 2011.)

Croatia has had a full list of endorsements. Among the recent commendations, Lonely Planet tagged the coastal region Istria as one of its top visits for 2011. Rough Guides, CNN, the New York Times and others included Croatia on their 2013 lists.

Already, and even before EU entry, the raw visitor statistics are encouraging. A growing number of tourist ships call in at the ports on this largely sea-facing country. It must even benefit from the misfortunes of others. As Egypt enters a fresh period of convulsion, the stability of destinations like Croatia must seem very appealing, with inclusion in the EU boosting its reputation as a safe and attractive destination.

Tourism is helping lead the nation out of four years of recession. It accounts for a fifth of Croatia’s GDP. There were 12 million tourists from abroad last year, with a surge in 2013, with bookings up 140% year-on-year.

In 2012 more than 332,800 Britons visited the country, up 24% on 2011. 20 percent more Britons visited Croatia in the first eight months of 2012 than in the same time period the year before. And bookings from North America for Croatia in 2013 were up 35 percent over the previous year.

While many people in the UK continue to fret over continued EU membership, Croatia is outlining the practical help it will give its tourism. Promoting the country recently in London, the Croatia Tourist Board offered these bullet points as positives:

A more sustainable and responsible destination under EU regulations.

No change in currency or adoption of the euro – Croatia will still use the Kuna currency.

Will the country be true to its word, as the prospect of yet more visitors looking for low-cost beach holidays beckons? Will it be able to protect those hundreds of miles of yet undisturbed crinkly coastline? If it does, the rewards, in terms of a sustainable future for its tourism, could be considerable.