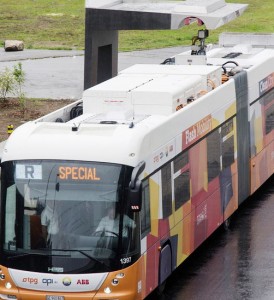 Public transport belongs in the heart of the world’s historic towns and cities. But what sort of transport?

Underground trains are best. Then, as you move above ground, the cleaner, the better.   Trams, gliding elegantly through ancient streets, are one clean public transport solution. But creating a new system in an old city can be an agony, and an enormous expense. Just consider the torment Edinburgh has suffered to fit itself just one line, which opened in 2014, from the Airport to the city centre.

Trolley buses are certainly clean and quiet, but they have to be powered by an extensive and sometimes unsightly overhead lattice of wires strung, in many cases from historic buildings.

Then there are buses. Their problem is that they run on diesel fuel. The sort of older buses you see in many British towns and cities contribute to the sort of air pollution that urban areas suffered at the end of the winter of 2014, and Chinese cities seem to endure all the time.

New hybrid buses, in London for example, switch to electric battery power when they pull away from a stop at low speed. They are less polluting, and quieter.   The most promising option is the electric bus, and several are on trial at the moment.

Milton Keynes has the most radical programme. The new town chose the wireless, rapid-charging option. The electric buses are recharged at the start and end of their route by standing over inductive plates buried in the ground. A ten minute charge replenishes two-thirds of the battery, enough to keep the buses going. At the end of the day, they slowly recharge overnight.

The other good examples are in London. Electric buses on the 507 and 521 routes, whose batteries have a range of 155 miles, cover their short routes in the course of the working day without needing to be recharged. (London also operates a hydrogen-powered bus on a route from the Aldwych to Tower Bridge. This is another possible means of future zero-emission propulsion.)

Now an interesting new version of the electric bus has emerged in Geneva. The TOSA “flash-charging” electric bus system, a clean, quiet, potentially zero-carbon public transport innovation that doesn’t require rails or overhead wires, has just completed a successful trial in the city.

TOSA (Trolleybus Optimisation Système Alimentation –  Optimizing Power System) is more like a trolley than a bus, but not as thousands of urban communities, including many places in Britain until 40 or so years ago, know or knew it.

The system allows for the removal of overhead wires, which could be an important aesthetic improvement in historic areas of cities.

The 133-passenger vehicles are powered by light electric batteries sitting on the roof. Every few stops a robotic arm mounted on the roof reaches up and is guided by a laser to an overhead charging point at the bus stop. For about 15 seconds, in the time it takes passengers to step off and alight, a short burst of power is delivered to the batteries, enough to help the vehicle to the next charging point a few stops away. In the case of Geneva, when the power comes from hydroelectricity, this is 100% carbon-free public transport.

The TOSA system, which doesn’t require expensive-to-install and maintain overhead wires, is planned to enter regular service on the streets of Geneva in 2017. Other cities are said to be interested.

This new electric-powered bus appears to work at a technical level, but at what cost? The École Polytechnique Fédérale de Lausanne (EPFL) has come up with a computer model to integrate the buses into existing transport systems while keeping costs down. It will take into account such factors as drivers’ wages, equipment cost, life expectancy of components, cost of electricity, number of passengers, the weather, the number of charging stops and the distance between them to produce a cost-effective plan.