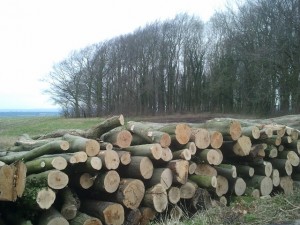 Freshly cut logs - an image of the Yorkshire Wolds

Before our very eyes an exhibition of hundreds of paintings of trees and lanes and hills and grassy banks, set in a serene, wide-open, empty corner of England not many of us know well, is becoming one of the cultural triumphs of our times.

The organisers of the Royal Academy’s David Hockney exhibition, A Bigger Picture, certainly underestimated its appeal. Such is the demand for tickets the gallery is now staying open until midnight on Friday and Saturday nights, and the expensive catalogue is being reprinted. The queues will continue to form right up until closing night on April 9.

There is one wonderful compensation for people who can’t make it to the exhibition. The Yorkshire Wolds, inspiration for this show, is open to all comers, a landscape for all seasons and for any time of day. Buy the catalogue online (£29.95), and take the Yorkshire Tourist Board’s Hockney Trail and go and gaze and linger, as you please.

I was very fortunate to attend an early morning showing with a small group, with a private commentary by co-curator Marco Livingstone. Yet even if you come in normal hours,  many of the works are so massive and direct that they will work their magic over the heads of the crowd standing in front of you.

What is unusual about this exhibition is that it features so much new work by a significant living artist in his older years, where normally galleries look back over the artist’s life, and his existing work, in a retrospective.

This exhibition is big (13 rooms), exuberant, very colourful and full of vitality and optimism. The energy and enthusiasm of a mature, yet still advancing, artist in a close relationship with a landscape he knew from his boyhood is palpable.

The 74-year-old Hockney, synonymous with a vivid Californian world of swimming pools, sunshine, palm trees and sybaritic living, completed many of the works after the exhibition was commissioned, and after his 70th birthday, working with remarkable energy for a man of his age, and developing new ways of expressing himself as he went along. Perhaps this comparatively late burst of creativity was fuelled by all that sun and fresh clean air in California, where he lived for more than 30 years before returning to his house in Bridlington in Yorkshire in the 2000s to prepare for this exhibition. More particularly he was encouraged to paint his native landscape by his dying friend whom he visited daily in 1997. What a wonderful posthumous gift to his friend.

The first room sets the scene, with some of the biggest landscape paintings in the exhibition, depicting the same three trees at Thixendale in the four seasons.

Then we wind briefly back to some of Hockney’s earliest works, with landscapes from his American sojourn, such as the photo collage of the Grand Canyon and Pearblossom Highway, put together with hundreds of photographs.

We are soon among those extraordinary, and most of them very recent, works the artist did in the Yorkshire Wolds. Some of the earlier works are watercolours; then he breaks out into oils. One entire wall of 3′ x 4′ paintings, trees in full foliage on a bright, summer day against chalk hills are pure joy. Other works are composites of six or more separate canvasses; Woldgate Woods, 2006, is a case in point.

When the sun isn’t shining, there is still colour. Even in winter, for example, there is the vivid green of emerging crops, undulating, deep brown ploughed fields, and green-barked trees over a sea of red leaves.

There are probably hundreds of works here, but Hockney scarcely repeats himself; although he was dealing with a small number of subjects, he manages to keep the paintings fresh and different. Some seem so contemporary; with others you sense a touch of Monet; and doesn’t that flurry of leaves remind you of Van Gogh?

From time to time Marco would tell us that he was there when Hockney was painting this or that work. (He co-wrote the main guidebook.) He believes Hockney is our greatest living artist, and there’s no question that he is the most accessible, and downright cheerful. And who possibly can be more versatile, working, as Hockney does, in watercolours, oil, photomontage, on an Apple iPad, with charcoal and with film?

Many works are from observation; Hockney would go back to the same location throughout the year and throughout the day – for example to the trees bordering a farm track, “the Tunnel”, near Kilham.

Marco told one very funny story. After a late night in good company at Hockney’s home in Bridlington, with what sounded fine food and wine, the company was roused very early by the artist, bundled into cars and driven off to catch the excellent light at some location.

Other paintings are from memory, and imagination (one huge hedge of white hawthorn flower, for example).   It’s the most sensuous thing here. Hockney describes the hawthorn blossom as if “a very thick white cream had been poured over everything…a pleasure to witness, just an intense visual pleasure”.

An entire room features works done on a device which did not even exist three years ago, the Apple iPad. He uses it as his sketchbook, and found a way to enlarge the images to a size where they wouldn’t be lost on the Royal Academy’s huge walls. We looked at 51 prints, originating from drawings of one small road near Woldgate, close-up, and  there was no pixelation. What he “painted” is simply made bigger, with no loss of quality. This is a medium you’d expect young artists to adopt in or straight out of art school, not a man of Hockney’s age and stature. Yet here he is, pioneering a new art form.

Then there is Hockney the film director, using multiple digital video cameras to depict a scene.  (Look in particular for the stately progress down a country lane shot from many viewpoints.) The very last room contains a delightful little filmic postscript, shot in his studio using those video cameras.

It’s a pity the exhibition cannot be continued somewhere else in Britain, but apparently there isn’t a gallery, outside the Royal Academy, big enough to accommodate all these works. If you want to see it, or see it again, after April, you will have to go to Cologne or Bilbao.

A Bigger Picture is a triumph in another ways. It is is quite unlike any other conventional exhibition. The other big shows running at the same time in London, both enormously popular, of works by Leonardo and Picasso, are entirely self-contained. The Leonardo might inspire you to set off to see the architecture of Renaissance Italy, but not in the way many people will now walk out of the Royal Academy determined to make the trip to the Wolds, now firmly on the map, brightly spot-lit by the exhibition. And as as soon as possible. (David Hockney’s paintings will endure for many years; who knows when the trees he depicted will blow over or be felled?)

Welcome to Yorkshire (the official Yorkshire tourist site) has put together a Hockney Trail, which launches in 9 March (2012), linking locations such as Bessingby Road in Bridlington, and, down quiet ways, locations at Garrowby Hill, Kilham, Thixendale and Woldgate Woods.

The Wolds are not well known. This is classic hidden-away England, east of York, south of Scarborough, north of Hull. While other parts of Yorkshire were being ruined by the industrial revolution, the Wolds remained fabulously empty and unblemished, turning to the same, slow seasonal change down the centuries. There are no big roads passing through it, so people dont just chance upon it.

This is a place most of us dash past on the way to somewhere else, a place of wide views, empty horizons and sudden slopes, leading down to quiet villages, scattered all over with those now famous trees, little copses and avenues running along some dead straight track. It’s so satisfying to make that connection between recently-completed paintings and the places that inspired them.