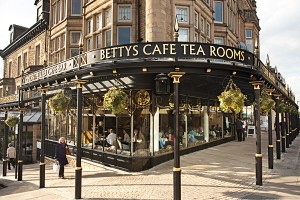 Time for tea, in style

This is a story of three variations on that great British success, afternoon tea. All quite different, but each, in its way meeting the same need, to halt and relax in the mid-afternoon, before a pot of tea, a plate of sandwiches, and a pyramid of cakes.

We’ve been putting the afternoon on pause (and any time after half-past two will do, although 4 PM has always been the formal hour), since the days of Empire, spreading tables with sandwiches and cakes and naughty delicacies. And even the arrival of ubiquitous, anytime coffee on the High Street has not dislodged these bastions of tradition, the tearoom and hotel lounge.

Afternoon tea is easy enough to find. Look for a hotel, a well-established family cafe or, and even in London, a National Trust tearoom, and you will find a cream tea backoning. In an age of austerity could this be one of the few catering institutions which might actually expand over the coming years?

One of my choices, the newest on the scene, is also a very strong candidate to be the most expensive in Britain, and even the world. Afternoon tea at Duke’s hotel is at the titanic price of £195 per person. That includes Alba madonna truffles, Royal Beluski caviar. Amedei Porcelana chocolate delices and pistachio macaroons with gold leaf.

My second choice is Betty’s tearoom in Harrogate, where the almost obligatory queue is part of the ritual at this graceful, but never pompous, tearoom. My third, with one of the best views from any cafe in Britain, is Verdi’s in the pretty little Victorian fishing village Mumbles on Swansea Bay. So three typical British tea-rooms? Not so fast. There’s a heavy European flavour in them all, or at least on their menus.

Betty is Harrogate is the oldest and not as English or even British, as it seems. It was set up in 1919 by Frederick Belmont, a Swiss confectioner, and you can find his legacy on the menu in, for instance, Cherry and Almond Gugelhupf.

There is an element of Per Ardua ad Astra at Bettys. This is self-reliant Yorkshire, and you expect to queue for those stellar macaroons, although they have softened up somewhat by letting you book a table at the Imperial Room at weekends. (Whenever you go, try for a window table at one of the street level rooms, rather than down in the basement.)

Bettys cooks everything in its own kitchens, and in these days of international franchising refuses to send its products even over the county border to expand into new cities and towns elsewhere. You can only apply the adjective “mass”  to the staffing levels: there were smart-suited men showing people to table, and traditionally-attired waitresses scurrying here and there bearing vanilla slices, fruit cakes, caramel chocolate hearts and “plump and fruity Fat Rascals, with bright cherry eyes and cheeky almond grins” on silver-plated three tier cake stands, with lemongrass and ginger, and Moroccan mint tisanes in shiny silver teapots.

Set tea comes with a choice of sandwiches (smoked salmon, roast ham, roast chicken, egg mayonnaise) with a sultana scone with strawberry preserve and Yorkshire clotted cream, miniature cakes and a pot of Tea Room Blend tea. At £17.50 a head it is, for the unremitting excellence that permeates this place, hardly expensive.

I cannot pass over the astronomical price of the Ultimate Afternoon Tea at Duke’s hotel. That’s what it costs and the decision is yours. Striving for the “ultimate” they wisely put cost aside; besides, you would expect benchmarks of excellence, irrespective of the price, to be set in a world capital.

What they offer is no mere stand of sandwiches and cakes, which many other hotels in the capital, I’m sure, are offering for £30 or £40 a head anyway.

I decided to do my own research on the menu.  Sandwich ingredients includes jamón ibérico de bellota. This ham comes from black Iberian free-range pigs that roam the oak forests along the border between Spain and Portugal. It is cured for 36 months.

The salmon comes from the traditional London smoker Forman & Son – their new factory is that pink building just behind the Olympic Stadium. Forman claim, as I am sure others do, to be the best in the world. Their attention to detail includes cleaning, splitting and trimming wild Scottish salmon by hand (they say most smokehouses use machines, which damages the flesh) and adding pure rock salt, sprinkled by hand, to dehydrate the flesh. There is no cheating in the process (they say), such as injecting brine to increase weight, then disguising that saltiness with sugar.

The dry aged beef will have been hung to dry for several weeks.This is expensive: the beef must be stored at near freezing, and only the higher grades of meat can be dry aged – the process requires meat with a large, evenly distributed fat content. You don’t tend to see dry-aged beef outside top steak restaurants and upscale butcher shops. The key effect is the concentration and saturation of the natural flavor.

And so to the truffles, and not any old truffles. These are alba white truffle, Alba madonna, from the Langhe and Montferrat areas of the Piedmont in northern Italy, growing symbiotically with oak, hazel, poplar and beech. The highly esteemed flesh is pale cream or brown with white marbling, some of the most valuable on the market.

The caviar is Royal Beluski. It comes from a sturgeon cross bred between the Acipenser Schrenckii and the Huso Dauricus, on the Amur River. “A strong robust taste with smooth buttery aftertones.”

Then pistachio macaroons with gold leaf. Pistachio macaroons on their own (they are a Jewish Passover staple) are not so special. What lifts them to the Elysian Fields is the gilding. They probably use, although I can’t be sure, either “Gold Gourmet Quadratis”, which is gold leaf, laser-cut into perfect miniature squares. Or Gold Gourmet Filament – gold leaf mechanically shredded until it is the same texture as finely shredded saffron. Both are placed on the macaroons with anti-static tweezers.

The saffron madelines are about memories, to be triggered according to taste. “An exquisite pleasure had invaded my senses, something isolated, detached, with no suggestion of its origin. Whence did it come? What did it mean? How could I seize and apprehend it?” That was Marcel Proust in In Search of Lost Time writing about the involuntary memory triggered by madeleines.

Anf finally, good old fairy cakes, vanilla and apricot scones and Chelsea buns, which must be the most local of all the items on the tea time list.

Such a fabulous spread calls for a remarkable bubbly accompaniment. They thought of that: Perrier-Jouët Belle Epoque champagne. Once the bottles were engraved; now they are only painted, with the company’s trademark panoply of anemones. “The strength of this prestige cuvée is finesse and elegance rather than power or fruit, a wine that possesses impeccable balance,” notes www.thewinedoctor.com.

if you are a group of four or more, Dukes seat you in the private PJ Lounge, described as a “modern classic room” with rich gold and forest green tones and a hand-stitched carpet with those exquisite Belle Époque anemones.

Dukes boutique hotel is on a quiet courtyard in Mayfair. It was named “England’s Leading Boutique Hotel” in the World Travel Awards 2011. All it lacks is a view.

My third tearoom has that in abundance. Verdi’s is a family run café, ice cream parlour and restaurant full of authentic Italian flavour on the sea front in the Victorian fishing village of Mumbles in Swansea. At any time of year there is a stupendous view across Swansea Bay, which curves like an elgongated “C” under the mountains. This is Swansea poet Dylan Thomas’ “long and splendid curving shore”.

Verdi’s, run by one of the old Italian cafe families who acquired some of the finest trading spots on the Welsh coast, is recession-proof with its huge passing pedestrian trade. It’s a cafe for all seasons, as welcome a place to stop on a late December afternoon as in mid-summer.

Cream tea is a mere £4.50, and scone with strawberries and cream is £3.10. Continue down the menu and you find a heavy Italian influence in Amarena Cherry Gondola, Gelato Affogato and Sorbetto Nabucco. Service is brisk. The view is priceless.