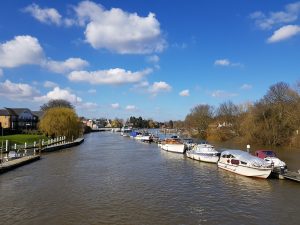 The Thames at Teddington, March 2020

Extinction Rebellion launched its Hourglass newspaper in September 2019. The newspaper folded in 2020, a victim of the pandemic.

I contributed a series of simple travel articles, under the heading Whistle Stop Walks. I would take a train to a random station, and walk for between six and 12 miles to another station on the same line, or sometimes on an adjoining line, and return home.

This was low-carbon tourism, where I was simply occupying empty, off-peak space on a train that would have been running anyway.  In many cases it was genuine discovery for me, because I had not been to those places before.

I’m republishing those walks here, with the occasional change or addition. In most cases they will be slightly longer than the published version, where cuts will have been made to fit the space.

This first walk demonstrates the concept. The start is close to Kemble railway station, and the end has frequent bus services to my return station, Swindow. No need for a car.

The source of the Thames

Our greatest river begins under a protective spinney in a Gloucestershire field. Did Isambard Kingdom Brunel deliberately route his London to Cheltenham railway within yards of this spot, drawing support from the watery spirits? There’s a clue in the symmetry? My train to Kemble Station, a short stroll from the source, started at Paddington, which is only a mile from the Thames at its most regal.

The Thames Path runs billiard table-flat, and easy underfoot, to the estuary  184 miles distant. It is the most accessible of  long distance trails. Today I’m walking the first 11 miles.

I follow the stripling river across a field under a line of tottering trees. There are still traces of once abundant hay meadows, through which Victorian writers would wade, kicking up clouds of seeds and perfume all the way to London. Then I find a real survivor. I picnic over the river on an ancient stone farm bridge garlanded with stonecrop, and watch aerial warfare between monster dragonflies on translucent wings.

It’s odd to walk along a boat-free Thames – the accepted starting point for navigation is Lechlade, 20 miles on – given over entirely to wildlife. A heron rises languidly, with the characteristic resistance to sudden departure of birds with big wings. Where there are herons, there must be fish. I muse on a vast community of water life exercising theoretical free passage all the way  to the North Sea.

St. Sampson’s Church, Cricklade, appears, the four pinnacles on its tower like newly-sharpened pencils crammed into a holder. Here the path cuts through one of Britain’s finest natural flowerbeds, enriched by millennia of flooding. In season North Meadow national nature reserve is a mile-long torrent of pink and purple snakes head fritillaries.

The young Thames will drift and dream for many more miles. But I leave it here. Still relying on public transport I take the 51 bus from Cricklade to Swindon station, (26 minutes 10 stops) for my train home.

The following two stories include short extracts from my book, A Walk along the Thames Path, which I wrote in the 1990s. It’s out of print now, but may still be available in libraries. When I researched it I would drive to the river on day visits, and then labouriously make my way back to the car after that day’s walk. Now you can find the nearest bus stop on your phone, and time-table your return to the nearest station.