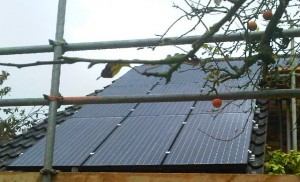 Solar, so good. Our new panels

The original estimates of what we would generate have proved to be uncannily accurate. One was 1970.072 kW p.a., so 17,730 for nine years. That was based on the government’s Standard Assessment Procedure for energy rating buildings.

I suspect several sunnier years than normal – but what is normal any more? – contributed to the higher total. The scheme paid for itself in 2017. (However we are on the general, opening, feed back tariff.)

The following article was posted in 2011.

Just after 4 o’clock yesterday, a dank drizzly day in October 2011, the engineer said to me: “ You are now generating your own electricity.”  It was a thunderbolt moment. We could have celebrated with a cup of tea, but they had a long drive home, he and his colleague from EOS Energy, young men doing the real new jobs in the UK’s tentative march to a greener future.

Within half an hour, whatever little light was left in the drab afternoon had  started the meter on its way.  What had been a long line of noughts  advanced to a long line of noughts with a  “.8”  at the end of it.  .8  was a mere token, probably enough to power the light in our fridge for a couple of seconds. But it had the significance of a full-on searchlight. For the first time in my life I was living in a house where the electricity, even if ever  such a tiny part of it, wasn’t coming from the National Grid.

On a practical level we are pleased that our whole solar energy exercise  went so smoothly. 13 solar panels were fitted to our roof over two days. First came the scaffolders, to put up the poles and platforms and ladders in about half a day . The two engineers had a 80 mile drive to reach us, which suggests that although  there is a big rush to fit panels just now, there is still a shortage of skilled men (and women?) to do the work. Cables were run up the wall from electricity meter to attic, the inverter was fitted,  the panels were laid, adjustments made and the men were gone within eight hours.

Today is the first day in the rest of this house’s life.  We have a silent and inoffensive  photo voltaic (PV) power station attached to our roof. I cannot imagine future owners going back to  “old-fashioned” power generation.  These panels should be good for 20 or 25 years. But they may not need to be around that long. I would be very surprised if after 6.3 years,  when it’s estimated we will have recouped our investment on this scheme, there won’t be far more efficient, and lighter and easier to fit, solar panels available.

We were lucky, not just because we could find the necessary £7800, in our case, although bigger schemes might be £10-11,000. (Even today many people have, or could borrow, that sort of money. You would need a lot more to buy an new average-size family car,  which would instantly depreciate.)

We just happened to be in a position to move quickly at a time when  the government was being uncharacteristically  (perhaps unprecedentedly)  generous. The offer available  to households  since the spring of  2010  is to pay a Feed in Tariff (FIT)  of £ 0.433 per kilowatt of electricity they generate. (Tariffs will be inflated annually, linked to the retail price index  and are good for 25 years.)

There’s been a surge in take-up, and it’s clear that the original budget will be exceeded (although the money comes from the utilities, paid for by a small surcharge on all bills, it is added to Treasury accounts, as if it’s public spending.)  In effect too many people want to  reduce  their CO2 footprint.  How can you have too many people wanting to be green, and after all, still spending a big chunk of their own money on it?

Indications are that the government will reduce the feedback tariff, the set amount of money guaranteed to consumers, by next April (2012).   By how much remains to be seen. Any cutback will surely slow  the rapid expansion  of the domestic solar energy market, and  retard the  welcome growth  of  jobs in the sector. (Our two engineers work flat out on this.)

I would recommend anybody who has the spare cash  to fit panels before the  government clamps down. It offers a very handsome return on investment, and it’s hard to see anything as good to put money on outside the perilous stock market.

There are a few things that still trouble me. A disproportionately large  number of  the reasonably comfortable middle-class, well on in  their property-owning  life,  are taking up the scheme.  I don’t see many solar panels on the roofs of the less well-off homes  (including housing association and former council houses) in the village where I live, where fuel poverty is likely to be experienced if there is any here.

Then there are the dozens of new homes being built on the edge of my village with not a single solar panel on their very commodious roofs. Many of the big builders don’t seem to care, yet.  Applying economies of scale, they could have been fitted with panels at a hefty discount to the price we paid while they were being built.  Many of the owners, youngish couples with children going through local schools (just the sort of target market  for the big eco-message),  will still be here  in 10 to 20 years or more  from now, by which time they would have handsomely recouped  the small extra  sum  on  their original mortgage. And a conspicuous group of 40 or so houses , the roofs glinting with PV, would have sent a powerful message  to passing traffic.  But let’s see what extra inducements, if any, the government comes up with next April.

Our home will not become zero carbon, because we  run a gas-fired  Rayburn,  in itself an energy-efficient means of cooking, central heating and providing hot water.  An ideal solution would be to replace it with an electrical Rayburn, but that would probably require more solar panels.

Are we being subsidized? (We are estimated to save £236 a year on electricity, calculated at today’s prices. The Feed in Tariff, FIT, will pay us an estimated £1079 a year.)  I suppose we are, by that small extra levied on energy bills that so enrages the Daily Mail. But then haven’t we, and you, subsidized fossil fuels for many years,  particularly when  the utilities were providing electricity to us  (with government connivance) at artificially low rates, with no regard  to the damage being done to the environment?

We don’t feel smug, but  we are happy to be making a small gesture (saving an estimated 1,004 kg of Co2 a year) to the health of the planet. It’s almost 20 years since the Radio Times put a photograph of a polar bear on its front cover, referencing a story inside on a phenomenon about we were  just becoming aware: global warming.  The progress to action, and even to a consensus of opinion,  on this very real peril, has been agonizingly slow.  Many governments and politicians still don’t “get it”,  though the scientific consensus is  now strong.

In the past few years I’ve been heartened by  signs of real progress,  at least at the level of the small-scale initiative such as electric cars and  this. I accept that solar power is still more expensive than  energy from fossil fuels,  although the prices are coming inexorably down.

And the wonderful thing about solar power is that you don’t even have to believe in global warming  to recognize its enormous benefits as a clean sopurce of energy. There is said to be more energy from the sun striking the Earth in an hour, than the world uses in a year. Since yesterday, with our 13 smart new all-black panels, we’ve been making a modest start to capture some of it.