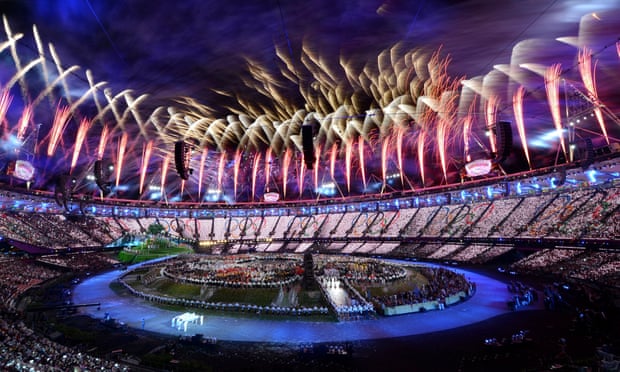 Our flight was about to be called, but we were suddenly aware of the sweetest sound I’ve ever heard in an airport, a choir singing somewhere on the top floor of the huge, high ceilinged building. It was a fine rendition of Danny Boy, and we assumed it was coming from a group of exuberant Irish choristers awaiting their flight home. Then it struck. It was the opening ceremony of the Olympics; they had turned the TV on in the bar upstairs.

Every last passenger made the connection and we all raced upstairs. The youth choir on the Giant’s Causeway in Northern Ireland was giving way to a choir on Rhossili Beach in Wales singing Cwn Rhondda, followed by Jerusalem and Flower of Scotland. This was the opening call from the four nations before the main ceremony in the Olympic Stadium.

Then, wonderful news (something I never thought I would say) the departure board flashed up a 90 minute delay to our flight. We sat there glued to something “brilliant, breathtaking, bonkers and utterly British”. Unforgettable.