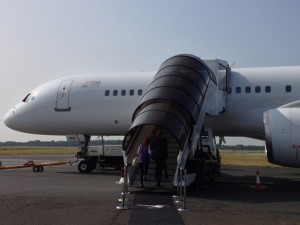 We love our foreign holidays, but at what cost to the environment?

Just three weeks after the world’s governments signed a deal to cut Co2 emissions to slow global warming, BA has announced that it has been forced to mothball a project to create 16m gallons of jet fuel from London’s rubbish every year.

It cites a number of reasons, (speaking to the Guardian) including low crude oil prices, jitters among investors, and a lack of policy engagement from 10 Downing Street.

BA’s  Green Sky project was due to open in 2017 at an ex-oil refinery in Thurrock, Essex. It would have turned 575,000 tonnes of household waste that would otherwise have been landfilled or incinerated into gas, and then aviation fuel.

Enough green fuel would have been produced to power all BA’s yearly flights from London City airport twice over. The  carbon savings would have been the equivalent to taking 150,000 cars off the road.

A BA spokeswoman noted that aviation fuels are not eligible for the incentives available to road transport fuels. That made it difficult to build a business case to invest in UK aviation fuels projects.

Imagine. The contents of your dustbin powering your next holiday flight.

At least that is what British Airways (BA) is saying, and the airline is hardly at the zany, experimental end of the aviation development spectrum. BA is committed to use a synthetic aviation fuel which will be produced from municipal waste and other waste sources in a potentially revolutionary new process.

It will be happening soon at the GreenSky bio-refinery, operated by Solena Fuels, to be built by 2017 on the site of the former Coryton oil refinery, at Thurrock in Essex, creating 150 permanent jobs. BA is said to be investing $500 million in the plant; it should provide the airline with a steady source of jet fuel for at least 10 years.

Until now “alternative” fuels have only been used on a tiny scale, and experimentally, by a number of big airlines. The Essex plant would only supply enough for 2% of BA’s flights. That’s a modest, yet significant start. Forbes estimates the venture will be enough to power all flights out of London’s City Airport. [On April 16, 2014, BA  said the plant will produce enough to power BA  flights from London City Airport twice over, with carbon savings the equivalent of taking 150,000 cars off the road.] And that’s only the beginning. There is plenty more municipal waste in Britain that could be diverted away from landfill sites.

I came across this initiative at the World Travel Market (WTM) (November, 2013). There was a reasonable scatter of people in the room for the Taking Responsibility for Decarbonising Travel and Tourism session, while in the rest of the vast Excel Centre in London’s Docklands the tourist boards of the world continued to promote the travel potential of their countries as if there was no environmental tomorrow.

The WTM has addressed, and continues to address, the need for green growth and climate change mitigation efforts, but it cannot control the ethos of this place, which is to encourage yet more people to travel in greater numbers to ever more exotic destinations, in many cases reaching them by air. It’s a wholly unsustainable message, but in very few places among those glossy stands do you find the connection being made.

To counter that, the International Air Transport Association (IATA) has set a target of using at least 50% renewable fuels for air transport by 2050. New aircraft design can only do so much; and there is not going to be an electric Boeing 777 that can be plugged into a power point back in the hanger.

Without biofuels reducing air travel’s carbon footprint will not be possible.

There are some promising biofuel candidates, such jatropha and camelina. Both have been used successfully in trials by airlines, mixed with conventional aviation fuel. But the case was set back significantly when it emerged that some biofuels were being cultivated on land which could have been used to grow food.

Within the past few years a far more exciting source of fuel has emerged, ordinary, boring household waste. Until now there have been several, and not very satisfactory, ways of dealing with waste. The first is to dump it in holes in the ground, after the recyclable materials such as glass, cans and plastic have been removed. But that costs £64 a tonne. Local authorities are looking at other ways of disposing of the waste.

Some councils take compostable materials – waste food and vegetable peelings and so on, and reprocess it as a source of energy. Others send it to incinerators, which generally attract controversy, where it is burnt to produce energy. The great attraction of municipal waste is that it is readily available at fixed, affordable prices – and it may even be free, because of the tipping fee the council disposing of it would otherwise have to pay.

The American company Solena, which BA has teamed up with, has developed a plant which uses its integrated biomass gasification to liquid process (IBGTL). The raw material is all that annoying domestic waste. Add on agricultural and wood waste. Aviation fuel comes out the other end.

The IBGTL process combines technologies old and new. The new technology is Solena’s proprietary high temperature plasma gasification technology, the “plasma arc process”. The old one is the Fischer-Tropsch process which is very well tested. Germany used it in the war; South Africa employed it in apartheid days when it was forced to make liquid vehicle fuel from its own coal.

The plasma arc system has been proposed for some years as a way to recover energy from waste, but until recently has not thought to be an alternative worth pursuing. But BA are confident enough that the technology is now sufficiently robust to proceed with it.

They are not alone. Solena is planning a similar plant in Germany, and the company is proposing similar developments in India and Australia.

At full production, Solena and BA’s  plant could be producing up to 16 million gallons of jet fuel and 40 megawatts of power, while diverting 500,000 tons of waste from landfills annually. The aviation fuel target is 1170 barrels a day. The small amounts of final residue from the process can be used in construction.

There are other, potentially significant advantages. Aviation biofuel produced of the plant will contain only 5% of the carbon found in conventional fuel. And because bio-jet fuel burns cleaner than crude oil-based jet fuel, the result will be a cleaner airport environment.

Further, not only does the process help the UK meet targets on reducing landfill, it reduces the amount of methane produced from landfill sites. Methane, as a contributor to climate change, is 21 times more potent than   CO2.

I’ve been attending the WTM for 20 years, and have for long been uneasy about its message of unrestricted growth and ever more glossy, and, necessarily, carbon-intensive holidays. Is it possible that the most important message of all in WTM2013 was given in that anonymous South Gallery Room 19?

It was that tourism can continue to grow, but the destructive demon that delivers that growth, the airline industry, might yet be controlled. And all thanks to the world’s dustbins.