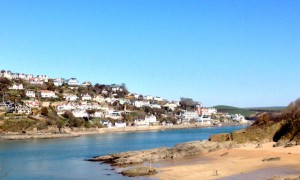 Tucked away in a quiet estuary at the very tip of South Devon is the small, chic town of Salcombe. It has a long waterfront, sheltered harbour, clean, sandy beaches, and that crucial and ancient detail, a ferry to take you over the water.

One of the quietest of the county’s resorts, just beyond the reach of the Victorian railways which changed the face of many resorts in Devon and Cornwall, today it has enough style and panache to match places on the French and Italian Rivieras.

Salcombe stands well back from the open sea, on one of the many indents in South Devon’s crinkly coastline. As well as high style, it packs a variety of interesting features, including an epic coastal path, a D Day point of departure, and sunken Moroccan treasure.

We took the five-minute hop over the estuary, although more correctly we should refer to this as a valley drowned in ancient times by the sea, from Salcombe to the East Portlemouth Landing. It was worth the £1.50 just for the view back from the wide sands of Mill Bay to the handsome little town, set against soft, green rolling hills.

It’s an ancient calling, but the ferrymen is still the most important player on these waters. Another, seasonal, ferry runs further inland through the drowsier inner recesses of the estuary to the little town of Kingsbridge. This is as far as the (now long gone) railway ventured. It was just far enough to keep Salcombe secluded, and just a little superior.

On the edge of the town are the ruins of Fort Charles, where the Royalists made their last stand in the Civil War. My favourite nautical link is in the town’s Maritime Museum. A group of 30 paintings honour the fast C19th wooden schooners – the ‘fruiters’ – built in Salcombe to speed oranges and lemons to the UK market from as far away as the West Indies.

We walked up a little wooded valley, passing, perhaps not so surprisingly, considering the benign climate down here, a semi-mature olive tree awaiting replanting. We were soon on the epic 630 mile South West Coastal Path.

Walking west, we reached Overbeck’s. There could have been few more peaceful retreats for invalided World War I soldiers than this Edwardian villa, now in the National Trust’s care, set high on the cliffs above the estuary.

In 1914 the couple who had just bought the house lost their son in the war. They turned it into a convalescent hospital, run by the sort of nursing team depicted in the BBC’s recent Crimson Field. Every one of the 1,010 soldiers who stayed there survived.

A small museum tells the story of the first owner, Otto Overbeck – scientist, inventor, artist, musician, and prize-winning fisherman. Paths meander through the house’s subtropical gardens. The former billiard room, where traumatized soldiers would play or relax, serves as the cafe.

A short walk beyond Overbeck’s, on higher ground, is Bolt Head. In 1944 Salcombe was a point of famous departure. The airbase up on Bolt Head must have been a fury of activity, with supporting Spitfires and Lysanders coming and going, when, on 4th June a force of 2000, mainly American servicemen, set out in a mighty flotilla of 66 vessels and many auxiliary vessels.

This was “Force U”, which would be deployed off the Normandy coast, to attack German defences on Utah Beach and protect the Allied invasion force. Vessels damaged in the invasion were later repaired in the estuary’s quiet side channels. The Maritime Museum tells the story. A plaque down on the quay, where the Salcombe Hotel was its headquarters, commemorates the US Navy.

The next day we crossed the estuary and took the coastal path east. The treacherous rocks just offshore are a place of many shipwrecks. One stormy day in the 1600s a galleon sank just below the Gara Rock Hotel. For almost 400 years its remains, and its cargo, slumbered below the waves.

Then, in the 1990s, divers brought up what is known as the “Treasure of the Salcombe Cannon Site”. The British Museum calls it “a unique find in the history of Britain – tangible evidence of a flourishing trade between North Africa and Europe from the C16th”. Stand on the cliffs and wonder at the fabulous hoard of gold, jewellery, pottery and 400 gold coins, struck by the Sharifs of the Sa’dian dynasty, who ruled Morocco in those times, and lost here for so long. The BM, which now owns the treasure, speculates the galleon may even have belonged to Barbary pirates, who raided the Devon coast.

Salcombe is in that premier league of West country resorts which compare well with chic spots in the South of France or the Italian Riviera in terms of their shops, restaurants and hotels. You may question the weather, but we were lucky enough to be there one gloriously sunny March weekend.

The freshly refurbished Salcombe Harbour Hotel and Spa adds fresh distinction to this small, secluded port. It is a bright and stylish example of how far hoteliers have moved from the often stuffy British seaside holiday formula. The smart spa, sauna and swimming pool were on a level with many high end hotels.

There was a sunny, nautical theme in the lounges, scattered with heavy coffee table books. Sharp black-and-white photos recalled long ago Devon holidays. The bonus in our Estuary Glimpse room was free G&T and sherry, and a tablet computer. The hotel’s 16 seat 3-D cinema, with four films a day and free popcorn, justified the hotel’s place on a recent “coolest places to stay in the UK” list.

One Salcombe fishing company exports large batches of live crab to China every week. It’s our loss. “Crab is an incredible and completely underrated shellfish” says Jamie Oliver. But not underrated by Dick and Wills, which sits high above the estuary in the town centre.

This lively little “contemporary bar and brasserie with a New England feel” is one of a number of places that support local fishermen and promote Salcombe crab and lobster. Signature dishes include crab salad with Cornish blue cheese and baby leeks, and pan-seared line caught local sea bass. They show the same commitment to the local catch along at the Salcombe Harbour Hotel and Spa, where they served hand dived Brixham scallops with chorizo and white bean puree as a memorable starter.
The writer stayed as a guest of the Salcombe harbour hotel. www.salcombe-harbour-hotel.co.uk. www.dickandwills.co.uk.
www.salcombeinformation.co.uk