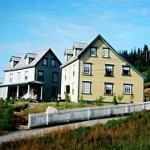 This article by the writer first appeared in the Mail on Sunday, 14 January 2002

‘There. I saw another one. And this time it was right out of the water.’

We were sitting in a restaurant – in Newfoundland. My wife had the superior air of the person in the seat looking out over one of the best sea coast views in Canada, while I was in the seat looking in, at waitresses bustling about with massive plates of halibut and chips and scallop chowder.

‘And it made an enormous splash.’

‘Where?’ I asked, craning my neck. There was no sign of the 30-ton monster. The sea was flat and calm.

Do whales have a sense of fun? Seems they do. No sooner had I turned back to my snow crab salad when she-with-the-brilliant-view yelled: ‘There’s a whole group of them, and they are blowing now.’

I turned and this time caught one of the most joyful things you can see on the surface of any sea, anywhere.

Spouts of water fountained up from humpback whales half a mile off shore. I checked the menu – they didn’t charge extra for a whale sighting.

Now it was my turn to be smug. I spotted something else out there. The sun glinted on what seemed at first to be the top half of a space shuttle stuck nose-first in the sea.

I looked again; no, it was nature’s ultimate limited edition, a sculpture carved from 1,000-year-old snow and rain.

This was August, and we were lucky to see an iceberg so late. This one’s huge, unseen bulk was snagged on the shallow sea floor.

There are four top experiences through which the tourist board is marketing Newfoundland, Canada’s eastern seaboard island province.

We had seen two of them from our table at the Lighthouse Restaurant, high on the promontory above St Anthony’s.

I cannot believe film director Lasse Hallstrom (who made Chocolat) didn’t squeeze both whales and icebergs into his film The Shipping News starring Judi Dench, Kevin Spacey and Cate Blanchett.

The film, based on Annie Proulx’s novel, tells the story of hapless newspaperman Quoyle (Spacey), a New Yorker who has spent most of his life being told he never does anything right.

When his wife is killed in a car accident and his aunt (Dench) suggests they return to the family’s ancestral land, Newfoundland, Quoyle finally has the chance of a new start and find out where he belongs.

We were here to see where the film had been shot. It helped put this overlooked province on the tourist map, nothing less than these wonderfully friendly people deserve.

‘Now how have all you folks been today?’ is a normal inquiry from a stranger you meet on a footpath.

Then there is the gift-giving; ‘I’m sure you will find a microwave to heat up this chowder,’ directed our landlady Rita, as we checked out of her aptly-named Hagan’s Hospitality Home. ‘And this jar of bakeapple jam is for you to enjoy at home.’ Another host gave us a travelling clock.

Newfoundland is a big island – 325 miles from north to south and 320 miles from east to west.

Avalon in the Irish south is where native-born Canadians like Rita speak in accents fresh-minted in Cork or Limerick.

At the end of a boat trip out of Bay Bulls, watching whales and counting the puffin hurtling across our bows, our guide Steve O’Brien sang a couple of rollicking numbers from his ancestral turf.

On the Burin peninsula, the main associations are with the now tragically depleted cod. The abundant shoals in its waters were one of the world’s great natural bonanzas.

Basques, Bretons, Portuguese and British came to fish and left a place name, or tumbled into the cultural melting pot.

Our whale-watching restaurant was at the top of the northern peninsula. To remind us how north this is, there was talk at breakfast, in Tuckamore Lodge, where we were staying, of a polar bear sighted in the forest nearby.

A few struggle ashore every year, after drifting south on ice floes.

We went looking, perhaps not too hard, one evening; no bear, but we did see an osprey, and some moose tracks.

On the flat coast at L’Anse-aux-Meadow is positive proof that the Vikings discovered North America, around 1002.

We walked around the foundations of the small outpost, and collected sea shore stones on which the Viking explorer Leif Eriksson himself might have stubbed his toe.

The other icon is Gros Morne, a soaring mountain block set in a landscape more akin to Norway.

Canada is well known for wide open spaces and stupendous mountains, but I always assumed you had to take the long haul to Calgary or Vancouver at the far side of this awesomely huge country.

Lasse Hallstrom chose as the setting for The Shipping News the area around the village of Port Rexton on the east coast of the Bonavista peninsula.

Englishman John Fisher put the film’s stars up in his elegant guest house Fisher’s Loft in the village.

Alas he couldn’t find room for us, but his friend Barbara gave us a wooden house, looking over a balmy bay.

The following day we went to Nan & Pop’s homely hamburger joint. I spotted a newspaper cutting from the filming.

Dame Judi was a regular here. ‘And she’s welcome back,’ said the lady behind the counter. ‘Now how have you folks been today?’