Newfoundland is the closest call in Canada from the UK, just five hours by plane. I found it microscopic on stress, huge on hospitality. My list of things you just can’t miss on this island roughly the size of England includes wilderness and whales, icebergs and Viking remains, seriously good fish dinners and all the bakeapple jam and blueberry crisp I could eat. 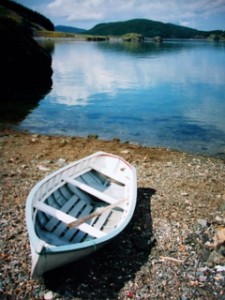 We landed in St John’s, a pretty little city of bright coloured wood houses on steep streets spilling down towards the harbour like a small-scale San Francisco. It is the oldest place in N America founded by the English. There are lively bars, good restaurants – the young waitress in Ches’s Fish and Chips, Freshwater Road, was one of the most helpful I have met anywhere in the world – and homely guest houses. The big thing is Signal Hill Historic Park, high above The Narrows, the harbour entrance. In 1901 Marconi received the first transatlantic wireless message here, three dots sent from Cornwall. In the new Johnson Geo Centre, is an exhibition on the Titanic’s sinking, 350 miles off this coast, in 1912.

We were on Cape Spear, the most easterly point in N America, just outside St John’s, walking on the springy turf above the cliff. Out of the calm grey water below came one of the most exciting sounds in the animal world, a whale spouting only yards offshore. In Africa and elsewhere you usually have to go deep into the wild to encounter great beasts. Here you find these awesome monsters within walking distance of the city. Another day we saw whales breaching –when they flip entirely out of the water – from our table at the Lighthouse Restaurant, on a promontory above St. Anthony. It was a unique double bill. The sun glinted on an iceberg, nature’s 1000-year-old limited edition sculpture. They drift majestically past all summer long.

Set aside a week to drive around Newfoundland, a rough triangle with sides 250 miles long. (Frontier Travel do fly drive). Easiest to reach, on empty roads south of St John’s, is the Avalon Peninsula, where native-born Canadians like Rita (she runs the aptly-named Hagan’s Hospitality Home in Aquaforte) speak in an accent fresh-minted in Limerick. This is said to be the most Irish place in the world outside Ireland. Immigrants came for the teeming shoals of cod on the Grand Banks, now tragically depleted. ‘I’m sure you will find a microwave to heat up this chowder,’ she said when we checked out. Her other gift was a jar of bakeapple jam, made from the abundant local cloudberry. We took a whale-watching boat trip at Bay Bulls, and counted the puffin hurtling across our bows.

On our first visit to Fishers Loft (photograph, above), handsome and comfortable small hotel in the village of Port Rexton, Dame Judy Dench and Kevin Spacey had just checked out after shooting The Shipping News. We heard a wonderful story about Spacey sending his bodyguards home because there was nobody to guard against. The movie, set on the east coast of the Bonavista Peninsula,
makes this area look bleak and eccentric, when, in the summer, it’s a balmy stretch of little bays, inlets and headlands. And a welcome that humbles you. “How have all you folks been today?’ is a normal inquiry from complete strangers we met on a footpath. Fishers Loft – with an excellent restaurant-is run by Englishman John Fisher and his Canadian wife.

We flew from St John’s to St Anthony, in the far NW, to see positive proof that the Vikings discovered North America, around 1003. On the flat coast at L’Anse-aux-Meadow is the continent’s only authenticated Viking settlement site, discovered in 1960. We toured rebuilt turf-walled longhouses and a replica Viking furnace and collected pebbles on which explorer Leif Eriksson might have stubbed his toe. At the opposite, southern, end of the island we made our oddest day trip ever. The tiny islands of St. Pierre et Miquelon, population 6125, 90 minutes by ferry from Fortune, are an overseas territory of France. They have gendarmes, spend the Euro and Sarkozy is President. During Prohibition Al Capone trafficked illicit liquor through here.

You don’t have to take the long haul to Calgary or Vancouver for Canada’s mountain wilds. Newfoundland offers an accessible wilderness in Gros Morne (‘Big Gloomy’) National Park, 420 miles W of St John’s. Geologists drool over this big upsurge of rust-coloured mountains, lonely fjords and forest. 570 million years ago two land masses, driving at each other like tectonic rugby forwards, forced part of the earth’s mantle to the surface. Known as The Tablelands, this is the centerpiece of this UNESCO World Heritage Site. Take in this spectacular terrain by car, on foot, by bike or kayak. Boats ply into the heart of its untamed places. There is a choice of hotels and inns.