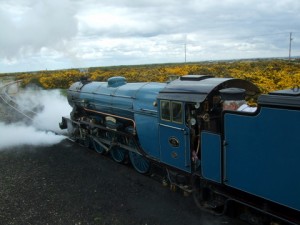 The mournful wail of a Canadian Pacific express split the deep silence of the Romney Sands Holiday Park. It shimmied down the ranks of caravans and reached the steps of my top of the range Ashcroft model, where I sat reading about the biggest shingle bank in Europe just down the coast. So what acoustic trickery was this?

Not much breaks the profound silence of Romney Marshes on the Kent coast.  It seems to be governed by the sort of aural forcefield you’d find in a Dr Who plot. No noise gets in, and nothing gets out.

But whoever was blowing that lonesome whistle seemed to have a dispensation to break the rules.  I decided to explore.

I reached the entrance to the campsite when the barriers swung down, and everything turned small-scale.  Hurtling along a tiny track, and giving it the full Rocky Mountain yowl, was pint-size locomotive Southern Maid. In it sat a full sized driver, overflowing out of the cab. The carriages it was hauling were to scale, although the passengers didn’t seem too squished,

Sneer at the Romney, Hythe and Dymchurch Railway at your peril. This narrow gauge railway, opened in 1927, packs bags of public transport punch for its size, and fulfils a vital tourism function. It runs for 14 miles, the length of Romney Marshes, from Hythe all the way to Dungeness on the bottom corner of Kent.

It was an interesting counterpoint to the line I used earlier. One of the big benefits of high-speed link to the Channel Tunnel is the extra space for trains running almost as fast as Eurostars, to places in Kent. I took one of the new 140 mph trains from St Pancras to Ashford, in service since December (2009). It took just 37 minutes to Ashford, and even with the extra 35 minutes in a taxi, that still makes mine one of the quickest journeys to this rather remote stretch of Kent coastline since, well, the dawn of mankind.

I crossed the road and walked straight on to the beach– caravan door to shore, just five 5 minutes — for an unusual demonstration in manned flight. Hanging 40 feet in the air, above the waters edge, and clearly defying gravity under enormous kites, were several figures in wet suits. This is kitesurfing, and this stretch of Romney Sands offers the stiff sea breezes these hardy aviators love. It’s all good honest aerodynamics, with no mechanical tricks.

It was fun watching young people hang in the air, as easily as ducks float on water.  But I had a train to catch and a — for once the words fit perfectly together — a “unique landscape” to see.

This little nodule in the bottom south west corner of Kent is cloaked in mystery even on a sunny summer day, in contrast to busy Folkstone shimmering conspicuously across the curve of White Cliff coast to the east. Even once busy Lydd Airport, a mile or so inland, was silent on my visit.

The loco Hercules hurried in to the Lilliputian Romney Sands station. I took my seat on a hard bench in an open carriage and we rattled off.  The Dungeness National Nature Reserve is odd in that it doesn’t have official borders.  You can consider it reached when you hear the first wheatear or see the first wild carrot or the very rare Nottingham catchfly – lost to its namesake city, but found here.

The big feature is the millions of tonnes of shingle, sorted  by the elements into different sizes as you progress along the cost.  (Hence Greatstone and Littlestone.) The shingle may be uncomfortable to our bare feet, but it represents top end living for many uncommon plants and insects and birds. As if to make the point, two linnets tizzed away towards Greatstone Beach.

In minutes we were rattling across the strange and desolate outer reaches of Dungeness, dotted with wooden fishermen’s houses made out of old railway carriages, and their boats drawn up on the pebbles.

The railway company give helpful hints on passing an hour or two at the terminus.  There are two lighthouses — one of which you can visit. And a very welcoming pub, the Britannia, with open fires in winter. The Railway Café, at the station, offers “renowned (locally caught) fish and chips.

Carry on walking and in an hour or two you reach Rye and the rest of the Cinque Ports. But thyere are two things in the way. And in the spirit of open disclosure travel writing, I’ll name them.

The first is the nuclear power station, purring away benignly on my visit.  Don’t care for that?  Then try the 26 wind turbines, each 350 feet high, ready to catch the breezes out of France, a few miles further on. Landscape blot? They didn’t bother me, just another detail in a wide-open landscape. And when this wind farm is finished soon, it will make my caravan Co2 free, along with 33,000 other homes.

Leaving the rail enthusiasts to ooh and aah at Hercules, burnished to a dazzling sheen, I set off on foot over the shingle towards the RSPB nature reserve on the far side of the nuclear power station. The website promised Mediterranean gulls, Manx shearwaters, a marsh harrier and black redstarts. But I never made it.

My mistake was to wander too close to the only fence there seemed to be around here, the one enclosing the power station.  When two very polite police officers with machine guns stopped me for a chat, I decided a cup of tea back of my holiday home made more sense. Besides, there was one last mystery to ponder right outside the holiday park. I took the bus back to the gates.

A pebble’s throw from my caravan are Greatstone Lakes, another of Romney Marsh’s many nature reserves.  These were created when these former gravel pits were returned to wildlife.

In the 1920s the boffins had their own little branch line to run trains to a hush-hush research establishment in a few minutes walk from here. They worked on the precursor to radar, and built the “Sound Mirrors”, three large concrete walls primed to listen for enemy aircraft. They still  stand, an early triumph of British ingenuity, on an island between the two lakes.

This are prime habitat for grebes, marsh harriers and bittern. A more disconcerting star is the medicinal leech, used when drawing blood from people was a top treatment in the health service of the day.

The list of wildlife grows ever more delicious.  The marshmallow, a delicate pink flower, indeed used to make the confectionery.

And what about the vuvuzela of Romney Marsh, the (inedible, I’m sure) marsh frog, or laughing frog, introduced from Hungary in 1932 and now widesprerad here?

I was too late for splashing around in the heated indoor pools, for a round of crazy golf, or a session of tennis or darts. I checked the evening’s entertainment.  Sparky and his Krew? Frank n Steins Jive ‘n Dine Show? Fine troupers all, I was sure. But I preferred a seriously quiet night in, in my nice new caravan, to “Big Night Out Cabaret.”

I tuned into the crepuscular mystery of Romney Marsh.  But I heard neither laughing frogs, nor nighinggales (they’d been heard recently). Apart from a distant car, no sound broke a perfect silence.