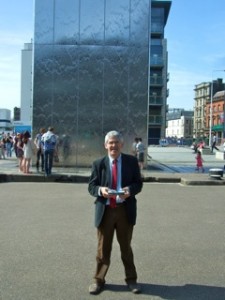 Entrance to the “Cardiff Rift”, a “wormhole” with its other end floating through and space and time.

“Blink and you’re dead. Don’t turn your back. Don’t look away. And don’t blink. Good Luck.”

We walk round the fine old  building, and inspect the window where the malevolent face appears. The village is one of the most serene settings in the last series, just right for our last call. it also a neat link back to the  Cardiff National  Gallery. One of the artist’s final works,  Rain at Auvers, hangs there.

Helen, as a bonus, stages a mini drama. Using the original script, she plays Amy Pond furiously berating the doctor, (played by the man in the checked shirt)  for staying away 12 years when he said he would only be gone five minutes. That episode was shot here too, in the fictional village Leadworth, an anagram of  “Doctor Who late.”
Back in Cardiff, we pull up outside the University again.  They used the Glamorgan Building as Churchill’s War Rooms.  This is where the Matt Smith Doctor meets his nemesis, now working for the war effort, in oddly quiescent mood. The Dalek delivers, for me, one of the immortal Doctor Who lines: “[to The Doctor] Would you care for some tea?”
The Doctor Who Location Tour is run by
Brit Movie Tours
http://britmovietours.com
0844 2471 007
The writer travelled courtesy of First  Great Western  www.firstgreatwestern.co.uk, 08457 000 125
David Tennant Doctor Who Matt Smith Russell T. Davies Torchwood