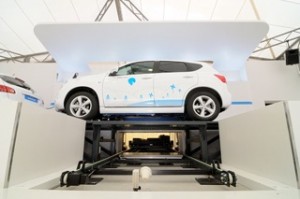 One of the most interesting electric car initiatives so far is about to start, first in Israel,  then, a little later,  in Denmark.

From from this summer people will be able to buy   a purpose-built Renault electric car with a range of about 100 miles. When  the battery is running low, they simply  drive into a service station and have  it swapped, in a few minutes, for a fully charged one.

The man behind this radical  scheme, the Better Place initiative, is Shai Agassi, who started appearing about four years ago on lists of technology figures to watch.

At first Agassi’s idea seemed a very good one, at least in the abstract. Then it began to  sound a bit fanciful.  After a century of owning  their own vehicles, drivers would not be quite in control here. They  won’t actually own the batteries in their own cars. Instead  they would take out a service agreement  and pay  according to mileage.

The idea is for them to pull into a Better Place station along the highway  anywhere in Israel, where a speedy team of  garage hands whip out the car’s  depleted battery and replace it with a fully charged one  in  a matter of minutes.

Now the plan seems to make a lot of sense again,  with  many  prospective electric car buyers still put off by  “range anxiety”,   the idea of running out of juice  in their electric vehicle  (EV)  in the middle of nowhere.

Better Place’s reassuringly  supportive network of  battery-replacement-on-demand stations  might just be the answer,  especially when the promise  is to change the battery in roughly the same time as it would take to fill the car with a tank of petrol. If it had a tank.

Finding the battery  “service stations”  will be simple.   An in-car information panel  on the dashboard  will tell drivers how far away the nearest recharging point is,  even how many people are waiting  there to have a battery changed.

Will Israel’s Electric Cars Change the World?, asks Time  Magazine in an article dated April 26, 2011. Agassi believe they will. Time quotes him thus: “Within less than this decade the No. 1–selling car in the world will be the electric car. It’s the biggest financial opportunity the world has ever seen. We’re seeing a $10 trillion shift in an industry in less than a decade. It’s the Internet, and add another zero.”

Renault is building a car for the program in Turkey, the Renault Fluence Z.E. (Zero Emission), a four-door sedan that looks like any other car, except that it’s designed to have  its battery easily removed and replaced   on a   special ramp–see photo.

Israeli drivers can order the vehicle from this summer. The Better Place programme  rolls out later this year (2011).

Better Place has been been conducting out all sorts of tests,  driving around Israel with empty  electric cars, cars full of fat people and cars full of  thin people  to test battery range.  Motorists should be  able to drive anywhere in  Israel  without fear of being stranded.  Denmark, a similarly sized country, will start the program shortly afterwards.

A final word from the optimistic Agassi.  “ We have digitised the most expensive molecule on the planet,” he says. “We’ve digitized oil.”