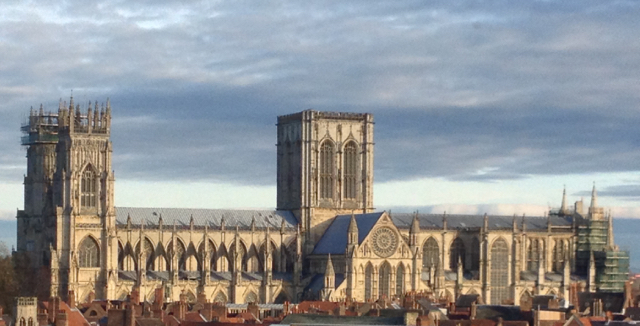 York Minster, November 2013, taken from the Radisson York City Centre, by the author.

York is an elite destination, and it knows it. Not content with welcoming people just the once or twice, it’s out to make a long-term relationship with its visitors. It doesn’t matter where you start from. York’s central location makes it one of the most easily reached cities in Britain, with trains running in from all parts. This is one of my favourite cities, a pl;ace to walk Roman walls, visit fabulous Viking remains, Saunter through a football field-sized shed of gleaming steam locos and browse a host of independent shops.

Free public WiFi throughout the city centre has made York one of the best connected tourist destinations in Britain. Anyone armed with a smartphone or tablet may plot a well-informed course around its historic features, using apps the tourist board and city attractions have created. I particularly like the York Churches app, which lets you discover quiet little architectural gems, scattered around the city centre like dim stars on the edge of a galaxy dominated by the Minster.
Until now many of these fascinating buildings were easily missed down the city’s complicated inner maze of ginnels and snickleways and other narrow mediaeval streets. The app guides you to St Crux, Pavement, St Denys, Walmgate, St Mary Bishophill Junior and the rest, with information on their history, architecture, decoration and their current use. The city has another high-tech selling point. It’s one of the first places to have its prime tourist attractions filmed by a drone. See them on www.visityork.org

Most visitors leave York railway station and turn left for the short walk to the centre. For a change I took the nearest stone staircase onto the city walls, straight outside, and headed right. Largely intact, York’s ancient defences form a rough square almost 2 miles long (the longest and best preserved medieval town walls in England), interrupted by the famous gates (or “bars”). Information boards tell a ferocious tale, such as: “Richard, Duke of York’s head displayed here”, “Roundheads breach Prince Rupert’s Civil War defences here.” From high on the walls, the views of the city are spectacular and unexpected. The massive Minster dominates every photograph. Complete the full circuit, or walk into the city from any “bar”. I chose Micklegate, via the still-cobbled shop-lined hill down to the first bridge over the river Ouse. So peaceful, and well off the tourist trudge.

York is one fat history book of a city. Chapter One is simply wandering around wallowing in the names — High Ousegate, Gillygate, Nessgate, The Shambles (one of the best preserved medieval shopping streets in Europe), Goodramgate, Bitchdaughter Tower, the Stonebow. And Whip-Ma-Whop-Ma-Gate, one of the smallest streets in York.

And do see the essence of our past railway glory, gently shunted into a great hall a few yards from York station, the National Railway Museum. My favourite among York’s not-so-frequented places is The Treasurer’s House, the first property to be donated to the National Trust (in 1930 by industrialist Frank Green) complete with all of its contents. His vast collection of art and antiques are shown in 13 rooms, each decorated in the style of a different period. You can still see the metal studs that Green placed in the floor to mark the position of furniture.

Smell is said to be the most direct of our senses, triggering a memory that lasts a lifetime. York is exploiting the power of the nose to communicate some of its many attractions in what they claim is the world’s first scented city guidebook. Scent engineers synthesised the aromas of horses on York racecourse, steam trains at the Railway Museum, and gunpowder of the sort the city’s infamous son Guy Fawkes may have used. Open to a photograph and the relevant perfume is released.
Other evocative scents of the city include afternoon tea – the aromas of loose leaf teas, spices and cakes, and the tempting scents of cocoa, butter, sugar and nuts used in York’s famous chocolates. The boffins’ biggest quest for olfactory exactitude came in recreating the scents of bad eggs and roses, said to accompany appearances by two of York’s most fragrant phantoms.

The most dominant, and dominating, of the city’s attractions remains the Minister. But there is fresh interest here, too. The new permanent exhibition “Revealing York Minster” is an introduction to the previously hidden history of the building and its site. It is housed in a series of underground chambers, a space created during emergency excavations during the 1970s. Revealed features include the remains of Roman barracks and the foundations of the Norman Minster.

The Orb is is another new visitor attraction at the Minster, displaying some of the world’s most important medieval stained glass. This elliptical treasure-house showcases five examples of restored stained glass panels from the Great East Window; each month a panel is changed so visitors can follow the progress of the work to restore the East Window.

Representing a complete change of cultural gear is another new attraction – York’s Chocolate Story, a guided tour through the history of the city’s famous chocolate-making families (businesses including Rowntree’s, Terry’s and Craven’s) and their creations, which range from the Chocolate Orange to KitKat. The visit is divided into three zones – Story Zone, Factory Zone and, and because it’s impossible to maintain a sensory neutrality on the subject, Indulgence Zone.

You needn’t even visit the city to savour the marvels held in the Yorkshire Museum. Keeping up with York’s trailblazing high-tech tourism, it is one of the first to stage online exhibitions in partnership with the Google Cultural Institute. The latest, Yorkshire Hoards, lets you wonder, online, at the Museum’s collection of buried treasures dating from the Bronze Age to the Civil War. The latest online exhibition is “1914: When the World Changed Forever”. But go to this wonderful museum anyway. You have to see the thrilling York Helmet for yourself. It is the most outstanding object of the Anglo-Saxon period yet found. Its mightily important owner Oshere must have been very proud of it in the 700s AD. And don’t miss the two great auks and the six champion trees in the gardens. www.yorkshiremuseum.org.uk.
And then there are ghosts. York is reputedly Europe’s most haunted city, with seven different evening ghost walks. The Original Ghost Walk of York, over 30 years old, is thought to be the world’s first exclusive ghost walk.

You don’t need a car to visit York. The main attractions are all tight together and convenient. There is a good choice of hotels a short walk from the railway station. We stayed in the Park Inn by Radisson. Our sixth floor room on the river side gave the best view in town of York Minster. A step up-market from this big, friendly middle-market hotel is the Cedar Court Grand Hotel. They turned the resplendent former North Eastern Railways headquarters, near the train station, into the sort of luxury stay the company’s topped-hatted board members would have relished, retaining the luscious touches of an opulent age of building – from hand-made bricks and Portland stone on the facade, to the lobby’s black and white Belgian marble floors, and the patterned wood blocks and imitation Roman mosaic in the corridors.

The York Pass (one, two or three days) gives free entry into thirty York attractions and tours, together with restaurant and shopping offers. www.yorkpass.com
I travelled with East Coast.
www.eastcoast.co.uk